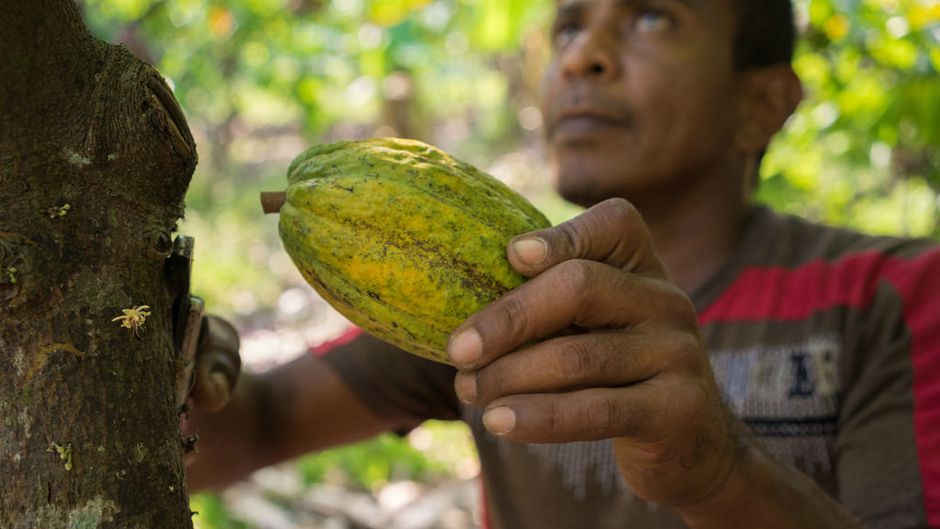 Imagine that you are in room. It’s about 30 by 30 feet. The floor is stone, and the walls and ceiling are a mix of stone and cement. They are a little damp, which you can smell but you can’t quite see. It’s pitch black except for the light that comes in from a low, arched doorway in whose frame is silhouetted an iron gate. When your eyes adjust to the darkness, you can see a narrow stretch of beach and the blue and gray of the ocean beyond.

This, a doorway in West Africa’s Elmina Fort, is a Door of No Return. It is the last part of Africa you would touch if you were a slave being led from the dungeon to a waiting ship.

I stood in front of this door a few years ago while visiting my family in Ghana. It is a place of sorrow and suffering. Countless human beings passed by this spot on their way to either a wretched death at sea or a life of bondage in the New World. They had been snatched up near their villages in slave raids; ripped from their families and everything they knew; shackled to others by the neck for a long march to coast; and thrown in a crowded, reeking dungeon for what might have been months until the next ship arrived. That was just the start of the journey.

This door represents many things. As human beings, it represents our capacity for cruelty — as well as resilience. Many of the descendants of those who went through it not only survived, but went on to build the “New World” itself. They paved the way for every opportunity I have had in the United States, and I believe their story makes us all stronger.

But this door also represents a beginning — the beginning of our modern food system.

If, back in the 18th century, you could see all the way across the Atlantic, you would find an unbroken line of plantations that stretched from Buenos Aires to Baltimore. Down this entire line, slaves harvested sugar for British tea, rice for West Indian consumption and cotton for the textile mills of New England. These were vast monocrops that broke the body and ruined the soil — but made money for planters and big companies that traded the goods.

If the logic of the industrial system is based on profit, the logic of real food is founded on respect and balance.

In this system, it is in the interest of the middleman — large companies that dominate the processing and distribution of food — to squeeze farmers and externalize costs. The industrial model may work for some things, but it’s time to admit that it doesn’t work for food.

It doesn’t work for Lucas, a tomato-picker in Florida, who toils from dawn to dusk without protection or health care and still cannot escape poverty. It’s not good for the farmers in Illinois who have nearly been bullied out of existence by Monsanto.

It’s not good for teenagers in Brooklyn who, when asked how many of them have diabetes or know someone with diabetes, raise every hand in the room. And it’s certainly not good for the 99 percent of us who are left holding the bag of rising health care costs.

It doesn’t work for anyone who wants — and needs — real food: food that nourishes the earth, communities, and individuals, both eaters and producers.

If the logic of the industrial system is based on profit, the logic of real food is founded on respect and balance. Real food isn’t opposed to profit, but it is opposed to profits that aren’t shared fairly with those who work the hardest to feed us.  The Door of No Return represents what we’re up against: a global industrial food economy 500 years in the making that exploits both people and land.

But there is also a second door: a wooden door on a busy London street below a hand-painted sign that reads “print shop”. You’d probably miss it if you were just passing by. If you were standing outside of it in one morning in 1787, you might have seen 12 men, mostly Quakers, go inside for a meeting.

That meeting sparked the beginning of the British Anti-Slavery Society, and the very first citizens’ campaign of its kind. Its members ran petitions, lobbied parliament and staged book tours, pioneering many of the social movement tactics we still use today. When those men walked through that door, the whole world economy was built on slave labour. 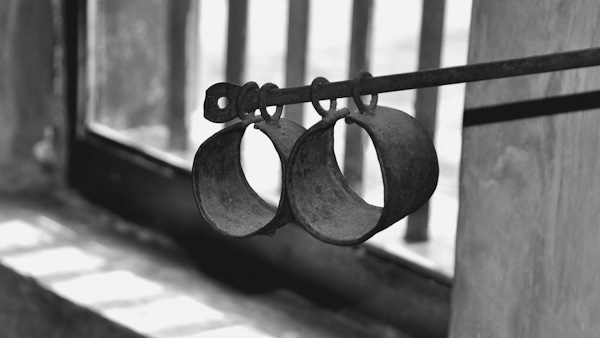 In 10 years, this group of 12 swelled to hundreds of thousands. And in just a few decades, it did the unthinkable: it ended the slave trade throughout the British Empire.

And yet in one generation, it came to pass. Those activists had no knowledge of the future, but they did have their conviction of what was right and what was wrong.

This second door represents something that could be cliché if it weren’t demonstrably, factually true: that a small group of committed people can, in fact, change the world.

This is the spirit that sparked the Real Food Challenge: a project that re-imagines a cafeteria tray as a tool for social change. It’s just one face of a larger movement that is pressing for a just and sustainable food economy.

In 2006, I started to meet college students who were active on their campuses. They were pushing for local food and asking for fair trade coffee and organic produce.  A group of us from all around the country, from Brown University to UC Santa Cruz, started talking and realized that we might accomplish more if we joined forces.

We realized that colleges and universities in this country spend over US$5 billion each year to feed their students. What if we could shift how that money was being spent? Instead of lining the pockets of the biggest and worst food companies, why not support smaller farms and socially responsible business? Why not invest in a real food economy?

We thought that shift might actually be possible because students are paying customers of their schools.  But it would depend on strong leadership from students themselves.

Alex Sligar grew up in rural Washington State.  When he was a kid, his father lost his farm and ended up working in a nearby feedlot. Alex’s brothers both went into the military and served bravely in Iraq and Afghanistan. Alex was on the same track until he got inspired to serve his country in a different way — by joining the food movement. As a junior at Eastern Washington University, he started a campaign to buy more regional food for his campus so that hard-working people, like his dad, could continue to work the land with dignity.

Alex was joined by another student named Mohamud Omar. Mohamud came from Somalia and had never considered himself an activist. But now, while famine ravaged his home country and his family faced obstacles to health and food access in the United States, Mohamud came to recognize food access as “the most important issue in my life right now”.

Alex and Mohamud and their teammates have called for transparency in purchasing at their university and have gained access to the cafeteria’s records.

Together, Alex and Mohamud and their teammates have called for transparency in purchasing at their university and have gained access to the cafeteria’s records. Now they are urging the president to sign a “Real Food Commitment” that would dedicate at least 20 percent of the school’s food budget to local, organic, and fair trade purchases.

In three years, the Real Food Challenge has built a network of 5,000 students like Alex and Mohamud at more than 350 schools. Students supported by the Real Food Challenge have won US$45 million of real food purchasing commitments — including a commitment by the entire University of California system. We’re estimating that in 10 years, $45 million could become $1 billion of real food commitments — and that we could set a precedent for other kinds of institutions.

It’s about more than dollars.  It’s about the change that is happening on the ground.

It’s about Alan, an apple farmer in Rhode Island who got a contract from Brown University. He was able to stay in business and is now selling apples to elementary schools as well.

It’s about Eliza, a hog farmer in North Carolina, which is ground zero for factory-farmed pigs. Unlike the factory farms around her, where the animals are confined in tight cages over lagoons of their own excrement, Eliza’s pigs run free on their pasture. Students at UNC got the school to start buying her pork.  She’s now selling to five other institutions in the area. Eliza and Alan and farmers like them are the backbone of the real food economy to come.

This may be one of the fastest ways to catalyze change in the food system. Using existing budgets, we can strike at multiple roots of the problem.  Where demand is fragmented, we can organize it.  Where there is too little clarity, we can create transparency and accountability. Where policy is stalled, we can foster new leadership.

Instead of a boycott, we’re mounting a “pro-cott,” strategically investing in the kind of food system that will advance social, economic, and environmental justice.

It’s a different kind of activism. Instead of voting with one dollar, we’re voting with a with a billion. Instead of a boycott, we’re mounting a “pro-cott,” strategically investing in the kind of food system that will advance social, economic, and environmental justice.

If we succeed, we will see a profound transformation in the way our food is produced and consumed. Vacant lots will become vibrant gardens.  Family farms and food traditions will thrive.  Hard work will be fairly rewarded.  Our climate and planet will sustain us.  All people will have access to food that is nourishing.

I think food is an incredible thing. I can’t think of anything else that connects us more intimately to each other and the earth, not to mention our health and our heritage.

Archimedes said: Give me a lever long enough, and a place to stand, and I can move the world. Real food is that lever. Let’s take a stand.

Anim Steel is director of national programs and co-founder of The Food Project (TFP). Prior to his work with TFP, Anim was a consultant with Economic Development Assistance Consortium. He was a 1997 Coro Fellow in Public Affairs, is 2010 Hunt Prime Movers Fellow, and was recently selected for an Echoing Green Social Entrepreneurship. This article was adapted from a speech delivered to the 2011 Bioneers conference.

Open Sauce/Source for the Food Revolution