Each year millions and millions of tonnes of plastic are produced. Estimates of worldwide annual production vary, but quantities of well over a 300 million tonnes are likely.

Plastic is a ubiquitous material used to make an enormous number and range of goods. In many cases these products are only used once — such as the 500 billion to one trillion plastic bags churned out worldwide every year. Much of the world’s plastic ends up as pollution in the land and the sea, to say nothing of the greenhouse gases emitted by its production and disposal. 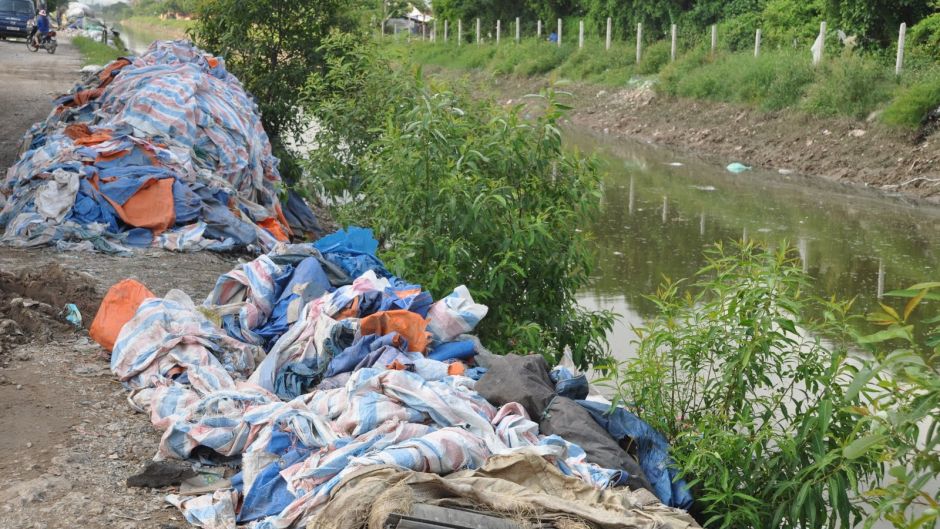 [quote quote=”Vietnam is home to an astonishing 2,800 craft villages that include not just those that make handicrafts for tourists, but some that specialise in recycling all sorts of discarded plastic, including from waste streams.” type=”image” image=”2178″ ]

People who collect and recycle plastic therefore play an important role in reducing pollution and conserving resources. In developing countries, waste pickers or scavengers sort through street rubbish or landfill sites and collect material that can be sold. After waste pickers have sorted and collected various types of waste it is sold to junk buyers, as described in a recent article by Martin Medina.

Vietnam is home to an astonishing 2,800 craft villages that include not just those that make handicrafts for tourists, but some that specialise in recycling all sorts of discarded plastic, including from waste streams. Residents of these villages buy plastic from junk buyers or directly from waste pickers and process it into plastic pellets or film that can then be used to make new plastic products.

Traditionally, rural villages in Vietnam produced handicrafts when they were not busy with planting or harvesting crops. Over time, many villages developed the expertise to make specialised products and so particular villages became renowned for such things as weaving, woodwork, lacquer work and metal products.

With industrialisation many villagers moved to the cities but maintained their craft skills and networks to produce products for the city market, for example craft villages make furniture, grow flowers or make utensils for the urban population. Other villages changed from making traditional crafts to producing different products desired by an industrialised society. For example, the villagers of Trieu Khuc changed from traditional paper making to recycling plastic. There are now many craft villages in Vietnam based on recycling plastic, paper or metal.

The village of Trieu Khuc is located about 30 minutes drive from the centre of Hanoi. According to a study by Pham Le Duc from the Vietnam Environment Technologies Corporation (ENTEC) and the Vietnam-based Urban Environment Company (URENCO) which specialise in waste treatment, there are about 77 businesses and 300 people engaged in recycling processes in the village.

Trieu Kruc is laid out like many traditional Vietnamese villages, with narrow lanes with high walls that enclose a courtyard and family home. Plastic waste is often stored in the lanes, while most of the recycling takes place in the family courtyard or adjacent small buildings (Photo 1). 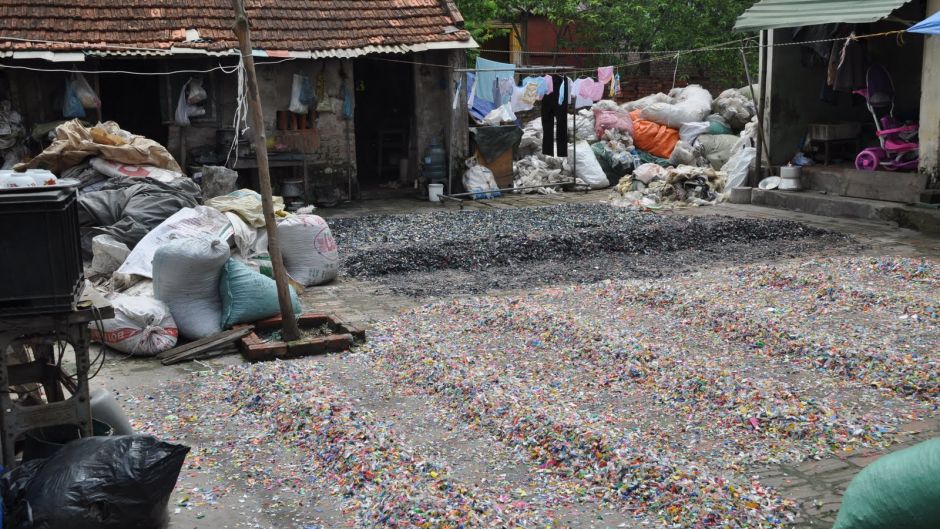 Many of the people recycling plastics in Trieu Khuc are self employed, many use family members for assistance and, in some cases, the more prosperous businesses employ paid workers. Each household business concentrates on a particular part of the recycling process and a particular type of plastic, such as cleaning the labels off used sealant containers (Photo 2 and 3) and then grinding these containers into chips. Another business is based on grinding, heating and pelletising beer crates to produce red pellets, (Photo 4 and 5).

Generally the households in Trieu Khuc produce chips or flakes for sale to factories in Ho Chi Minh City or China. These factories then make a finished product or fibre for clothing, carpet and other applications. However, some households in Trieu Khuc buy pellets locally and make finished products in the village, including chairs, coat hangers and indicator light covers for cars (Photo 6 and 7).

Businesses from another, larger village outside Hanoi, Minh Khai, generally have more investment in equipment than Trieu Khuc. A survey conducted by Duc in 2008 found that, of the 293 households engaged in recycling activities, 38 of these own trucks that they use to transport plastic waste to the village and finished products to markets.

The 600 people employed in recycling activities in this village produce about 5,000 tonnes of product each year, the bulk of which is either pellets or plastic film that is sold to factories in Ho Chi Minh City or China.

While some of the plastic waste is sorted in the village (Photo 8), much of what arrives in Minh Khai has already been separated by scavengers and junk buyers — for example, PET bottles (Photo 9), plastic bags and plastic film. After sorting, some types, such as plastic bags, are washed and then heated to make molten plastic (Photo 10 and 11) that is then made into film or pellets.

There are, however, serious health and environmental risks identified with the washing and heating processes. Plastics can emit toxic fumes when heated and PVC fumes can cause asthma. Mixed wastes pose additional hazards because they can contain pathogens and toxic substances like asbestos or lead. The smoke from the charcoal and wood fires used to heat plastic, together with the fumes from the heated plastics themselves, can lead to air pollution in the village, (Photo 12).

In addition, the plastic is washed in water troughs with mechanical agitators and the waste water containing fine chips of plastic and plastic sludge is discharged into the village drains (Photo 13). From here it can enter the local waterways and impact on local drinking water supplies, irrigation and/or fish stocks (Photo 14).

However, the problem of air pollution could be reduced by making improvements in heating and ventilation technology.  For example, local exhaust ventilation could remove the hot plastic fumes from the workplace and these fumes could then be captured by simple filters before discharging to the atmosphere.  Some villagers have installed thermostatically controlled electric heating which substantially reduces the risk of overheating and burning plastic.

Water pollution could also be significantly reduced by capturing plastic sludge and pellets before they enter the waterways. Reuse of wash water would also be technically feasible. Some villagers are already attempting to filter water and install ventilation but these efforts are piecemeal.

For, as another study points out,  in Vietnam there is a lack of enforcement of environmental regulations for household-level producers because of the assumption that the waste they generate is not significant compared to larger firms.

Further, it is too expensive for the government to monitor and enforce regulations due to the huge number of these small enterprises. Thus, the “shadow price” of environmental impact may vary greatly across the small production units and may be positive or negative depending on the voluntary compliance of the waste generator. 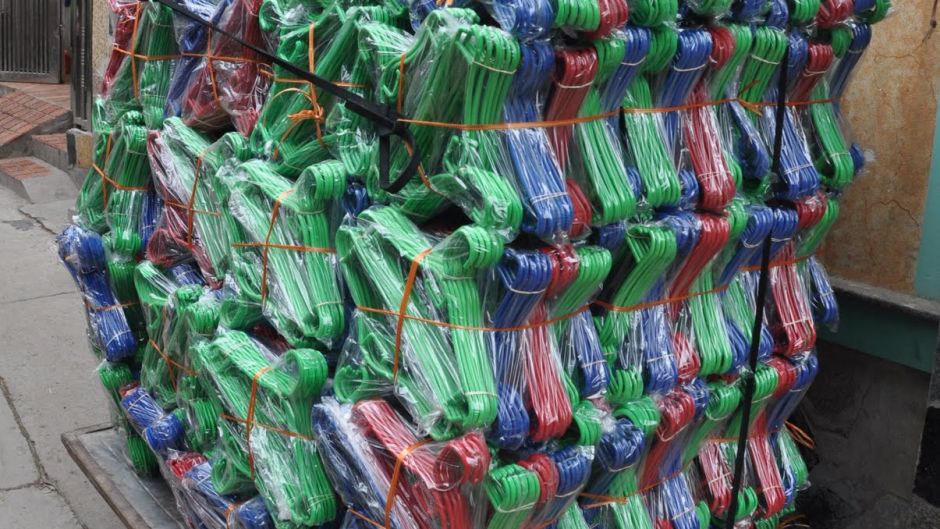 [quote quote=”Despite the environmental and health costs, recycled plastic avoids the problems of unnecessary landfill and pollution, and the generation of greenhouse gases from synthesising new plastic, much of which will only be used once anyway.” type=”image” image=”2180″ ]

Despite the environmental and health costs, recycled plastic avoids the problems of unnecessary landfill and pollution, and the generation of greenhouse gases from synthesising new plastic, much of which will only be used once anyway.

These plastic craft villages of Hanoi are providing a very useful environmental service, as well as allowing citizens to make a living. In addition, they have shown that traditional forms of production can be adapted to use the materials of an industrial society, without requiring large amounts of investment capital.

Given the global market for recycled plastic is likely to increase as rapid urbanisation and development continue, the enterprising and innovative spirit of the plastic craft villagers could be a good economic model for other countries to follow.

A look at Vietnam’s plastic craft villages by Warwick Pearse is licensed under a Creative Commons Attribution-NoDerivs 3.0 Unported License.

Warwick Pearse is a consultant working in occupational and environmental health. He has held a number of senior government positions in Australia and was the foundation Director of the National Industrial Chemicals Notification and Assessment Scheme (NICNAS) in Australia. He has also completed two occupational health consultancy projects for the WHO in Vietnam. Warwick has written and presented widely on occupational and environmental topics. He has published many papers in refereed journals and edited a book on Occupational Health and Safety Management Systems.