A Sojourn in Mexico’s Livingroom

It was over a year and a half ago when I was preparing for my move to Mexico to teach English Language and Literature. This was in August of 2012, when President Felipe Calderón was coming to the end of his term, after having stoked the flames of the drug cartels, and Enrique Peña Nieto was to enter as the new president at the end of the year.

Drug violence had reached its peak in Mexico under Calderón, who ordered the national military into areas that were essentially run by the cartels rather than the national police (though the blurring between national and criminal organizations can be misleading: criminals have been known to pose as officers, and vice versa). Over 55,000 people had already lost their lives in the warfare between rival cartels and the national police and military, comparable to the number of United States soldiers killed in the Vietnam War, clearly carving out this Mexican problem as a proper war rather than just a chronic series of street crimes.

The people of the United States were, and are, horrified by the stories that come out of Mexico, which give reason to quickly judge and quickly dismiss all that is good about the country. But is this how we should regard our neighbours if their home appears slovenly or strange from the outside? No. We’ve got to knock and meet the people inside. So, that is precisely what I decided to do.

It was disconcerting to know that I was about to make my home for two years in a place that had received such brash warning from my own US government. I even sat down with a map of Mexico and checked the US State Department’s travel advisories for each state, colouring states red for “defer non-essential travel”, yellow for “travel with caution” and blue for “no travel advisory in effect”. About 75 percent of the map ended up red, with the most common tourist destinations in blue (about 15 percent) and all the rest yellow.

Did this mean that the people in these “red” states were bad? Well, of course not. Wasn’t responsibility for violence in these areas partly my own since it was my compatriots who were buying up the drugs and funding the cartel businesses in the first place? It is the simple law of supply and demand that is the motor of the cartel activity, but the lion’s share of the violence is on the Mexican side. Why should the fingers all point to Mexico, when it was equally logical to point them at the US?

So, it was not just to teach English that I decided to move to Mexico. It was, as well, to develop a relationship with the neighbour whose front yard was currently a mess. What was inside? What were the people like? What could I bring back to my friends and my family that would help to dispel some of the unfortunate stereotypes about how Mexicans are violent and volatile? Mexicans were people all the same, with music and dance and food and myths and legends and family values, and how could they be that different from those of my own country? 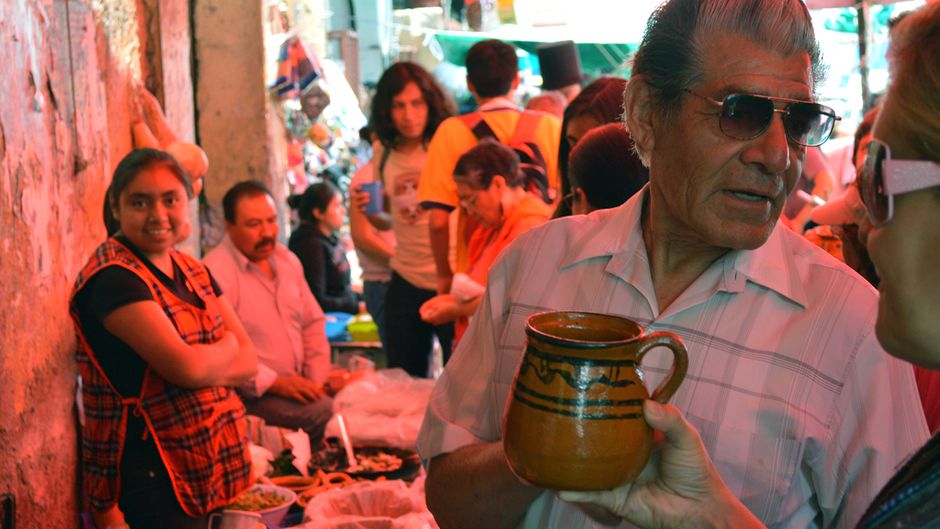 A man and woman chat over a cup of pulque, an alcoholic beverage made from the fermented sap of the maguey (agave) plant. Photo: David Puma. Creative Commons BY-NC (cropped).

What I found when I arrived in Mexico City was an embrace and welcoming that made it feel like a home. In my neighbourhood of La Navidad, within the borough of Cuajimalpa (the Federal District of Mexico City is made up of 16 boroughs), graffiti and litter garnish the streets. The smells of sewage and the delicious cooking smells from sizzling suadero, or tender beef brisket, run around as if they were chasing one another in the street. Cuajimalpa does not have the posh reputation enjoyed by the Polanco neighbourhood in the Miguel Hidalgo borough, but it does have Santa Fe, which has become one of the wealthiest and commercially prosperous areas in Mexico City. Very wealthy and very poor people both made up my neighbourhood, but the kindness transcends all of that. Despite the mixing of luster and rust in La Navidad, what transcended all was the value of home.

Walking around, as the tall gringo that I am, never made me feel uncomfortable or subject to any danger. When approaching any given bystander or shop owner, I was received as if I were a guest, and thus treated cordially. Sometimes my exchanges would become lessons in which I was the humble student and, rather than treat me like a resident, locals would correct me or tell me things to help me navigate my new Mexican world. “You know, you are a güero. You know what that means?” Or I would be politely corrected: “Hey, friend, it is pronounced like this…” I was always grateful for the honesty and the many occasions upon which I could have easily been taken advantage of but was not.

And it was not just the many neighbourhoods of Mexico City that I had explored that welcomed me, either. I found this welcome spirit in the many states that I traveled through: Oaxaca, Guerrero, Mexico, Michoacán, Guanajuato, Puebla, Tlaxcala, Quintana Roo, Chiapas, Yucatán, Morelos, and Veracruz. Never, after over one and a half years, have I ever been witness to or object of a violent act or crime.

Of course, that does not mean that crime does not exist, or even just resentment towards foreigners.

In the town of Tulum, in Quintana Roo, outside of the tourist strip where cocktails mock the locals and hotels paint a picture of a fantasy within the reality of day-to-day life, I decided to find the local library. To me, this is a fantastic way to find the true spirit of a town.

I walked off the main street and found myself snaking up and down the residential roads. Graffiti on one wall said, “Let’s end the violence” and another said, “Be nice to foreigners.” But still, the looks that I got, walking by myself on streets that foreigners had no business being on, said “Frustration”. One man, who looked to be about twenty-five, sat on a porch and, as I walked by, he spat in front of me. I continued on to the library without thinking twice about it.

And then it hit me that this man probably spent his working hours selling to the tourists who often didn’t pay him any mind, couldn’t even communicate with him, and only occasionally bought whatever it was he sold (maybe coconut juice or small handicrafts). And here was one such foreigner now, a stray, invading even his personal life. To think that you couldn’t get away from these people, who guard their money and belongings from you as if you were a crook, even on your own front porch. It makes you want to spit. So he did. 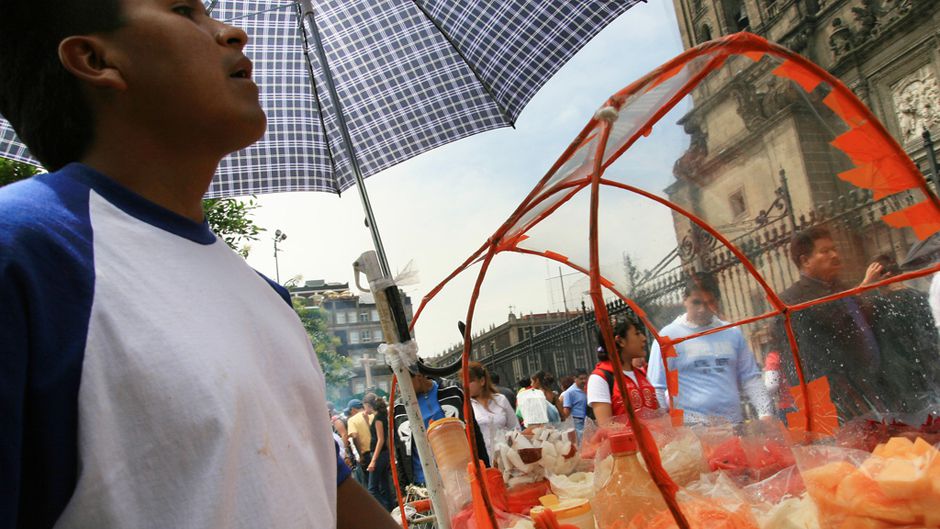 The reality does remain that Mexico has indeed been a dangerous place nearer to the US border routes. But it is also important to realize that the danger surrounds those visitors who allow themselves to be put into dangerous situations. Allowing oneself to be on an empty street during strange hours, or dealing in neighbourhoods where the cartels run the show, does increase the chances of a mugging or kidnapping.

Juarez City, on the opposite side of the border with El Paso, Texas, is the most notorious of all Mexican cities, with a surging murder rate of 3,100 in 2010, according to the US State Department. However, the murder rate, despite the horror stories and stigmas, is on the decline: according to the same source, 749 murders were officially reported in Juarez City in 2012. The reputation of being “The Murder Capital of the World” has begun to wane, at least according to the dropping numbers.

What is more surprising is to compare the murder rate in Mexico City itself, the country’s much larger capital, to well-known cities in the US. According to “How Safe is Mexico?”, an independent online site for promoting “safety over sensationalism”, Mexico City’s murder rate was at nine for every 100,000 people, as published in 2013. Considering that Mexico City’s population is around 19 million, according to the US Central Intelligence Agency, this murder rate is modest. To compare, Miami, Florida reports fifteen murders per 100,000, Baltimore, Maryland with thirty-five murders and New Orleans, Louisiana with the highest rate in the study at forty-nine murders per 100,000 people.

What is easily overlooked is the fact that guns are illegal for private ownership in Mexico unless the owner is affiliated with a registered gun club, whereas in the United States, anyone can own a gun and keep it close by. So then, why is it that Mexico continues to get a bad wrap from its northern neighbours when it comes to safety at large? That violence in Mexico is most often carried out for economic reasons is also less terrifying than to consider that so many violent crimes in the United States occur for reasons of psychological illness, hatred, or for no apparent reason at all.

The truth may be lost in the mass media that flows between the US and Mexico, and then between television screen and viewer. What remains, somewhere in the traffic of information, is the backdrop of good Mexican people who are categorized and shelved, and ultimately missed out on by those whose perceptions come from the grisly stories that only speak to a fraction of this vibrant and gracious country’s existence.

A Sojourn in Mexico’s Livingroom by John Bruce is licensed under a Creative Commons Attribution-NonCommercial-ShareAlike 4.0 International License.

John Bruce’s writing has been featured in the UC Santa Cruz Literature Colloquium, as well as appeared in such publications as The Alembic and The Red Wheelbarrow. After a year-long academic hiatus to promote his songwriting, he received his degree in World Literature from UC Santa Cruz and has taught high school English Language and Literature for three years in Latin America. He continues to write on a freelance basis.