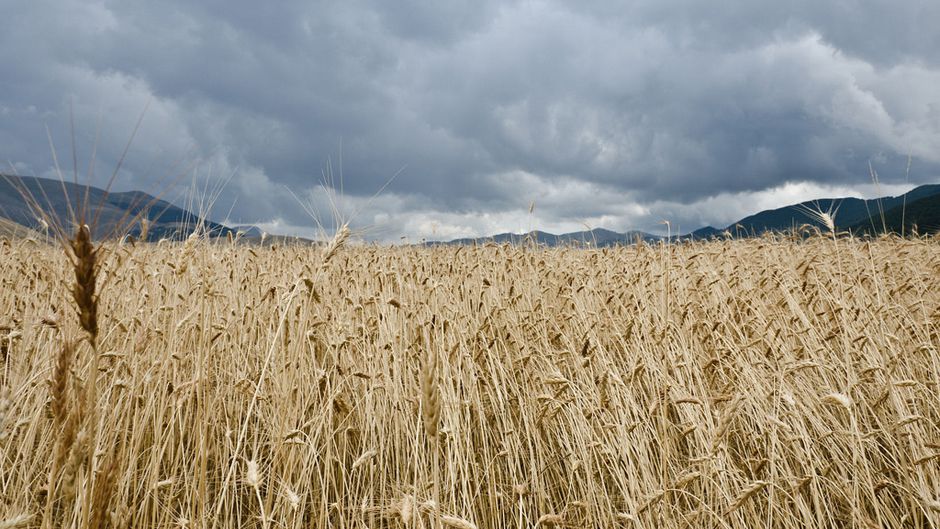 As the likelihood of weather extremes increases with temperature, the consequences of lower yields for cereal crops will be felt around the world. Europe produces, for example, 29 percent of the world’s wheat. Harvests of wheat and barley across Europe could be 20 percent lower by 2040 as average temperatures rise by 2°C. And by 2060, European farmers could be facing very serious losses.

Two consecutive studies in Nature Climate Change examine the challenges faced by the farmers — the first of the reports being by a team led by Miroslav Trnka, of the Czech Global Change Research Centre in Brno. They considered the impact of changing conditions in 14 very different wheat growing zones — from the Alpine north to the southern Mediterranean, from the great plains of Northern Europe to the baking uplands of the Iberian peninsula, and from the Baltic seascapes of Denmark to the fertile flood plains of the Danube.

It is a given that farmers are at the mercy of the weather and that crops are vulnerable to unseasonal conditions. But a rise in average temperatures of 2°C is likely to increase the frequency of unfavourable conditions.

The researchers, therefore, factored in such data as the numbers of days with very high temperatures, the incidence of drought, late spring frosts, severe winter frosts with too little snow, spells with too much rain, spells when the weather is too cool at the wrong time.

Altogether, they calculated 11 sets of adverse conditions that could blight winter wheat in all 14 sample environments. They then used climate models to simulate the probability of things going wrong once, and also more than once, in any single growing season. And they found that by 2060 the occurrence of adverse weather conditions would increase for all environments.

“This is likely to result in more frequent crop failure across Europe,” they conclude. “The study provides essential information for developing adaptation strategies.”

Adaptation strategies — according to Frances Moore and David Lobell of Stanford University, California, in the second of the Nature Climate Change studies — are exactly what European cereal farmers should be thinking about.  They analysed the yield and profit records from thousands of European farms between 1989 and 2009. They then matched the data with climate records to test performance under a suite of different weather histories, and ran simulations using 13 different climate models.

“The results clearly showed that modest amounts of climate change can have a big impact on yields of several crops in Europe,” Moore said.

“This is a little surprising because the region is fairly cool, so you might think it would benefit from moderate amounts of warming. Our next step was to measure the potential of European farmers to adapt to these impacts.”

Increasing levels of carbon dioxide in the atmosphere should, in theory, be good for crops — fertility should increase — but a procession of recent scientific studies has painted a different picture.

With extra heat comes a greater likelihood of drought to slash maize yields. And even when the extra carbon dioxide increases growth, it may reduce the levels of all-important plant protein in the yield.   In addition, extremes of heat at the wrong time in the growing season could devastate crops, while the change in average temperatures will open the way for invasions of new kinds of pest.

The Stanford researchers argue that what matters most is how quickly farmers in Europe can adapt, and how crop yields will respond

“By adaptation, we mean a range of options based on existing technologies, such as switching varieties of a crop, installing irrigation, or growing a different crop,” Lobell said.

“These things have been talked about for a long time, but the novelty of this study was using past data to quantify the actual potential of adaptation to reduce climate change impacts.”