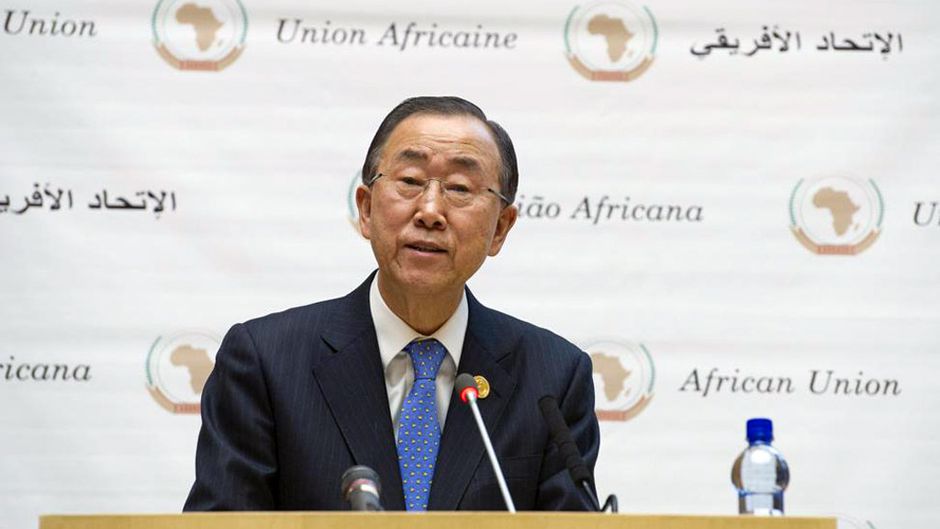 Addressing the African Union (AU) Summit in Addis Ababa, Ethiopia, at the start of what he called a “crucial year for global action to secure our global future”, the United Nations Secretary-General today said he looked forward to African countries realizing their massive cultural, human and economic potential.

“African countries have been the backbone and leading Member States of the United Nations since the day they achieved independence,” Ban Ki-moon said, noting their growth in numbers from four States in 1945 to 54 in 2015.

“In this critical year, we need Africa to help guide the way to a world of sustainability and dignity for all the people, where nobody will be left behind.”

Throughout his speech, the Secretary-General stressed the centrality of Africa to the UN’s work and promised that the UN would stand with Africa as a partner and the “strongest supporter” of the continent’s efforts to achieve peace and security and all aspects of sustainable development.

He pointed to gains already made thanks to the Millennium Development Goals (MDGs) and looked forward to adoption of the post-2015 development agenda, including a set of sustainable development targets, and to a meaningful, universal climate change agreement in Paris in December.

“No continent has more at stake in these negotiations than Africa,” he stressed, underlining the importance of the Financing for Development Conference in Addis Ababa in July. “Without resources, our commitments to sustainable development will amount to little more than fine words on paper.”

Fulfilling the aspirations and wishes of the continent’s people required leaders to listen to their people.

“People around the world have expressed their concern about leaders who refuse to leave office when their terms end,” he said. “I share those concerns. Undemocratic constitutional changes and legal loopholes should never be used to cling to power.”

Alongside that call, the Secretary-General highlighted the AU’s long history of supporting democratic transitions, saying that he hoped elections due to take place in African countries over the course of 2015 would be as peaceful and successful as those in Tunisia, Botswana, Malawi, Zambia and others in 2014.

He noted other positive developments from the previous year, including affirmation by the AU’s Human Rights Commission of the rights of lesbian, gay bisexual and transgender (LGBT) individuals and the Cotonou Declaration on the abolition of the death penalty in Africa. He was also pleased to welcome the AU Commission of Inquiry report on South Sudan and the final report of the Commission of Inquiry for the Central African Republic.

The focus of the African Union’s “Agenda 2063” on gender equality and the empowerment of women was another positive step and he hoped for its formal adoption during the Summit. However, he called for even quicker action, urging African States to make a deep and lasting difference to the lives of women and girls by 2020.

“We have much more work to do to unleash [their] tremendous potential,” emphasized the UN chief. “They need better access to secondary education, decent work and economic opportunities. They need more help to combat maternal mortality and poverty, and genital mutilation. They need more protection from the scourge of violence at the hands of men and boys.”

There is also need for Africa’s development agenda to provide affordable, quality healthcare, a fact illustrated most clearly by the impact of the Ebola crisis. Having recently visited Guinea, Liberia, Sierra Leone and Mali, he praised the support, solidarity and generous contributions of African Governments and people to their efforts.

“We are seeing clear signs of progress,” he said. “I urge the international community to commit more resources at this critical time.”

Cooperation is also essential to the progress seen on the peace and security front, he said, pointing to several examples of combined operations, including the joint mission with the Economic Community of West African States (ECOWAS) in Burkina Faso, the partnership between the UN, the AU and the Intergovernmental Authority for Development (IGAD) in Somalia, and continued collaboration between the UN and AU in Sudan and Libya.

Peace and stability in the Democratic Republic of the Congo and Great Lakes region required joint decisive action, and it was time to redouble joint efforts towards peace and stability in South Sudan. He also welcomed the specific focus of the AU’s Peace and Security Council on the issue of Boko Haram in Nigeria.

“The humanitarian consequences are enormous, with up to one million people forced from their homes,” he said. “This group continues to kill Christians and Muslims, kidnap women and children, and destroy churches and mosques. We will never forget the girls and boys kidnapped from Chibok last April, and I will never stop calling for their immediate and unconditional release.”

As the UN reviewed its peace operations, including its peacekeeping missions and special political missions, he stressed that African troops remained vital to the UN’s peacekeeping capacity. In that field, as in others, cooperation with African mechanisms would again be essential and he welcomed progress on the African Standby Force and the African capacity for crisis response.