An Urgent Need to Address the Ongoing Humanitarian Crisis in Yemen 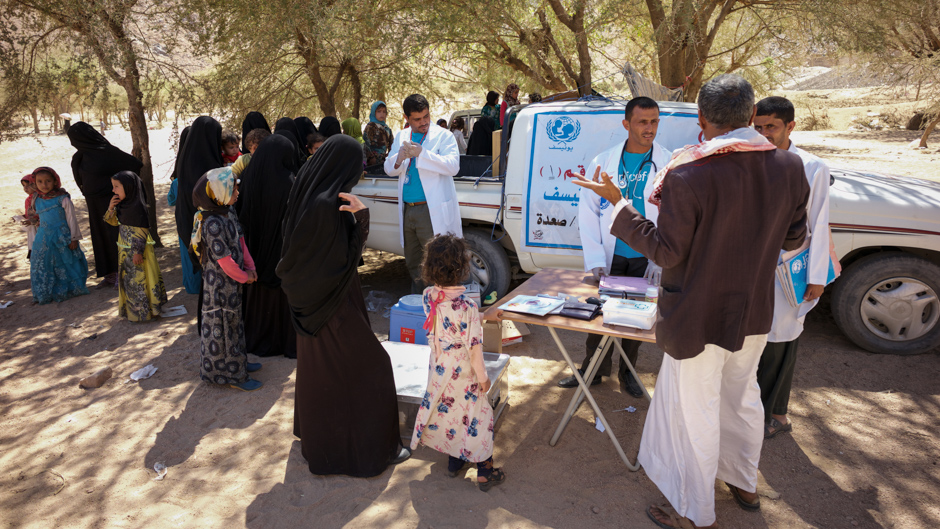 A mobile health clinic in Yemen, where fighting makes it dangerous or impossible for families to go to health centres. Photo: Julien Harneis, CC-BY-SA 2.0

The ongoing civil war in Yemen which started in 2015 is estimated to have killed well over 13,000 people including an estimated 5,000 civilians, although there are reports that the real numbers are much higher. The United Nations and other sources estimate that half of Yemen’s population — an estimated 14 million people — face starvation in what is now described as “the worst famine in the world in 100 years”.

The factions in the Yemeni civil war are backed by military powers on both sides, making any peaceful resolution of the dispute through the UN-brokered diplomatic channels exceedingly complex. This humanitarian disaster has in turn led to a health crisis. With the destruction of existing health facilities by the warring militia, displaced populations — especially women and children — are vulnerable to cholera and other diseases. As the war goes on, millions of civilians who are trapped in the conflict face starvation, disease, and imminent death.

In his famous book, Rats, Lice and History, originally published in 1935, the renowned American microbiologist Hans Zinsser provocatively said that:

“[T]he effects of a succession of epidemics upon a state are not measurable in mortalities alone. Whenever pestilences have attained particularly terrifying proportions, their secondary consequences have been much more far-reaching and disorganizing than anything that could have resulted from the mere numerical reduction of the population. Panic bred social and moral disorganization; farms were abandoned, and there was shortage of food; famine led to displacement of populations, to revolution, to civil war, and, in some instances, to fanatical religious movements which contributed to profound spiritual and political transformations.”

Zinsser’s words aptly capture the current situation in many areas of conflict where civil war has led to the total collapse of weak and dysfunctional governance architecture and social institutions. The recent polio outbreaks in Pakistan, Afghanistan, and Nigeria have proven that health systems in war zones and fragile conflict-prone situations are never resilient enough to cope with illness and disease outbreaks.

Cholera thrives in situations where populations are displaced from their homes, and settled in overcrowded camps without access to clean water, sanitation, sewage systems, and good quality food. According to the World Health Organization (WHO), “the consequences of a humanitarian crisis — such as disruption of water and sanitation systems, or the displacement of populations to inadequate and overcrowded camps — can increase the risk of cholera transmission, should the bacteria be present or introduced”.

In north-east Nigeria, a region devastated by persistent violence by the Boko Haram terrorist group, the United Nations Population Fund (UNFPA) warned that “large-scale displacement and a health system in tatters… have left many, most worryingly, pregnant women and their unborn babies, vulnerable to cholera in the wake of an outbreak.” As serious as this situation is, it is a microcosm of the humanitarian emergency driven by cholera epidemics in conflict situations around the world. A case in point is Yemen.

Over 50% of Yemen’s health facilities, according to WHO, are not functioning, and 14.8 million people lack access to basic health care services.

The situation in Yemen has deteriorated rapidly since the outbreak of civil war in 2015. So much so that in 2017, following a joint visit to Yemen to assess the scale of the humanitarian crisis, the heads of three United Nations agencies — (Anthony Lake, UNICEF), (David Beasley, the World Food Programme) and (Tedros Adhanom Ghebreyesus, WHO) — issued a joint statement alerting the world that “this is the world’s worst cholera outbreak in the midst of the world’s largest humanitarian crisis.” The situation has not improved since then with major aid agencies recently warning of a risk of “an imminent and great big famine engulfing Yemen.”

In major Yemeni cities, vital infrastructure including health and water facilities have been destroyed by war. Over 50% of Yemen’s health facilities, according to WHO, are not functioning, and 14.8 million people lack access to basic health care services. Yemen’s entire health system faces an imminent collapse.

As a peaceful political solution to the conflict remains elusive, at least for now, there is an urgent need to address the ongoing humanitarian crisis where cholera now poses a vicious threat to vulnerable people: women, children, and older people. In particular, as the UN warned, “pregnant and breastfeeding women are especially vulnerable to malnutrition, making them more prone to contracting cholera, which in turn gives them a higher risk of developing dangerous or even fatal complications”. To address this humanitarian crisis, the UN Humanitarian Coordinator for Yemen, Jamie McGoldrick has urged “all parties to the conflict to uphold their obligations under international humanitarian law to facilitate the safe and unhindered delivery of humanitarian assistance in areas under their control”.

The wheels of traditional diplomacy between the governments of sovereign states, or between states and international organisations are often slow and ineffective. Governments are usually driven by their strategic interests focused on either national security or economic interests. The cholera epidemic in Yemen is likely to be low on the list of foreign policy concerns in major countries unless it raises a serious security or economic concern.

Unlike traditional diplomacy, humanitarian diplomacy offers more opportunity to prioritise humanitarian interests over other interests. In the context of health, global health diplomacy has become a new focus that “brings together the disciplines of public health, international affairs, management, law and economics” to refocus and reorient the “negotiations that shape and manage the global policy environment for health”. Prioritising health diplomacy for effective humanitarian action involves multiple actors: states, international organisations, civil society and NGOs, philanthropic entities, charities, and individuals. Coordination is crucial to bring these actors together into cohesive and structured action.

The humanitarian catastrophe in Yemen is too complex to be left to the traditional diplomatic whims and caprices of individual nation-states whose foreign policy interests may be channelled elsewhere. To save innocent lives now and ensure that “no one is left behind”, it is urgent to bring the vulnerable groups threatened by cholera, starvation, and malnutrition in Yemen within the parameters of pragmatic humanitarian action.

This article was first published by BMJ Opinion.

Weiam Al-Hunaishi is a Yemeni physician, and a Master of Public Health student in the Department of Social and Preventive Medicine, Faculty of Medicine, University of Malaya (UM), who was previously an intern at the UNU International Institute for Global Health.

Yemen: at a Crossroads