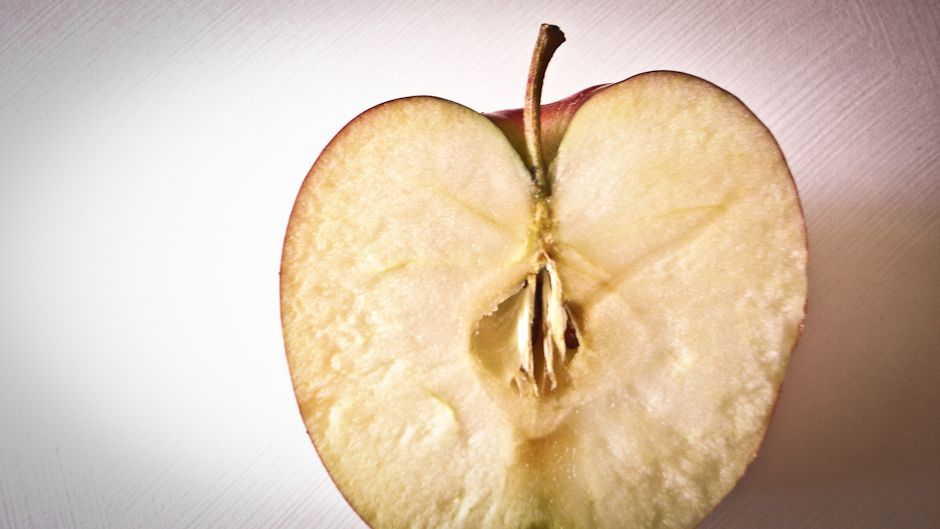 In Japan and elsewhere, people often wash their produce before eating it. Why? Is it to rinse off the dirt and insects? Or maybe we are hoping to clean off all the dreaded pesticides?

Perhaps the question is: do we really need those pesticides? One pioneering organic apple grower, Akinori Kimura, has proven that we do not. For years now, he has been inundated by more orders than he can handle from those who want a taste of what has been nicknamed the Miracle Apple. 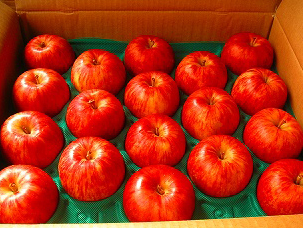 Kimura’s farm in Hirosaki, Aomori prefecture, has been visited by thousands of people interested in learning his secrets. He regularly gives talks across Japan and we were lucky enough to hear him speak at the Green Expo 2009, held from 4-5 July in Yokohama. (See the Green Expo video at the bottom of this page.)

Why is Kimura’s tale so important? Perhaps you have heard that overall average pesticide use declined by 5% between 1990 and 2003 in Organization for Economic Cooperation and Development (OECD) member countries. However, as the chart shows, trends vary dramatically in different areas of the world. There have been notable decreases in Hungary, the Netherlands, Germany and Japan, but increases across Southern Europe and in Mexico.

For countries where there has been a large increase in pesticide use, the main reason has been the expansion of crop production and substitution of labour for pesticides. On the other hand, the factors behind decreases in pesticide use are diverse, ranging from declines in crop production, the rise of environmental awareness, tighter pesticide controls, to the use of new targeted pesticide products with lower doses.

According to a report from Japan’s Ministry of Agriculture, Forestry and Fisheries (MAFF), the percentage of organic crops in Japan is very small — just 0.18% of total production in 2007. Nearly half of Japan’s farmers say they would switch to organic farming if the conditions were right, pointing out that it is not easy to convert from conventional farming to organic farming as it is much more time-consuming and costly. Farmers also complain about the lack of training available on organic farming methods.

There is also an entangled relationship between farmers and the Japan Agricultural Cooperative (JA). Kazuhito Yamashita, an ex-bureaucrat from MAFF, has revealed that farmers lose support from JA and are ostracised if they don’t use pesticides and fertilizer sold by JA. For most Japanese farmers, it is almost impossible to continue doing business without JA’s support.

Lately, there is apparently a segment of the JA membership who are beginning to think seriously about organic farming, so hopefully their aspirations will spread within the cooperative.

As solid as oak

Even though pesticide-free farming is thought to be possible for just about every crop, the productivity of certain plants like rice, wheat, soybeans, mandarins, oranges and daikon radish falls by 20 to 35% without pesticides.

Apples have undergone numerous breeding modifications, making them particularly susceptible to disease and insects. As a result, apples suffer a productivity loss of over 90% without pesticides, according to statistics by Japan Planet Protection Association.

Despite these challenges, Kimura has successfully been growing pesticide and fertilizer-free apples. He began pesticide-free farming when his wife suffered from pesticide poisoning. At the start of his switch to organic methods, he suffered a major loss in income. With his business on the brink of collapse, Kimura went to the mountains, contemplating suicide.

There he noticed that the wild pesticide-free oak trees were surrounded by overgrown weeds, yet they were growing well and overflowing with acorns. Kimura thought he could give this technique a try with his apple trees and he began working on reviving the natural ecology of his fields. Finally on the ninth spring, his apple trees blossomed again. 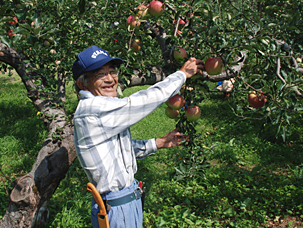 Kimura’s fields are now overgrown with weeds and the earth is warm even when you dig deep: just like the soil in the mountains. He says his apple trees, which have deep roots, feel happy in this environment. In contrast, when Kimura was still practicing non-organic methods, the ground temperature dipped sharply just 10 cm down after the field had been sprayed with pesticides and fertilizers. Saturating fields with pesticides weakens micro-organisms and a lack of weeds disrupts the ecosystem. The more diverse weeds, the better balanced the soil.

In our modern era, production rates of crops have risen sharply due to the mechanization of farming, breeding techniques, and the organization of large-scale farming operations that utilise large quantities of pesticides and fertilizers.

The chemical industry spends vast sums on the research and development of pesticides and fertilizers, yet there is little being done to address the costs they bear on both human and biological ecosystems.

These costs include soil exhaustion, where the overuse of fertilizers strips the soil of nutrients.  In addition, many varieties of today’s agricultural produce have been deliberately modified so that it is now very difficult to grow them without pesticides.

Pesticide use also has impacts on biodiversity, killing many of the bugs, good and bad, that work in tandem with our food crops. Further, when the same pesticides are used for certain periods and in certain amounts, pests develop a resistance to the chemicals and therefore a new pesticide must be developed and the vicious cycle continues.

Even more worryingly, there are large stockpiles of pesticides, banned due to their effects on the body and environment, that are left abandoned and are now creating problems across the world.

Despite these serious concerns, the chemical habits of the food industry continue. Considering all that is at stake, not only for farmers and the ecosystems, but for our own health too — is it not well past the time to “vote with our forks”?

Quite clearly, we also need more enlightened farmers like Akinori Kimura and his Miracle Apples as strong examples of what can be achieved.

Apples Have Feelings Too by Rie Hayafune is licensed under a Creative Commons Attribution-NonCommercial-ShareAlike 3.0 Unported License.

Engaged as an assistant and writer for the UNU Media Studio, Rie is interested in how business and environmental issues interact. She studied International Affairs and formerly worked in the financial field.