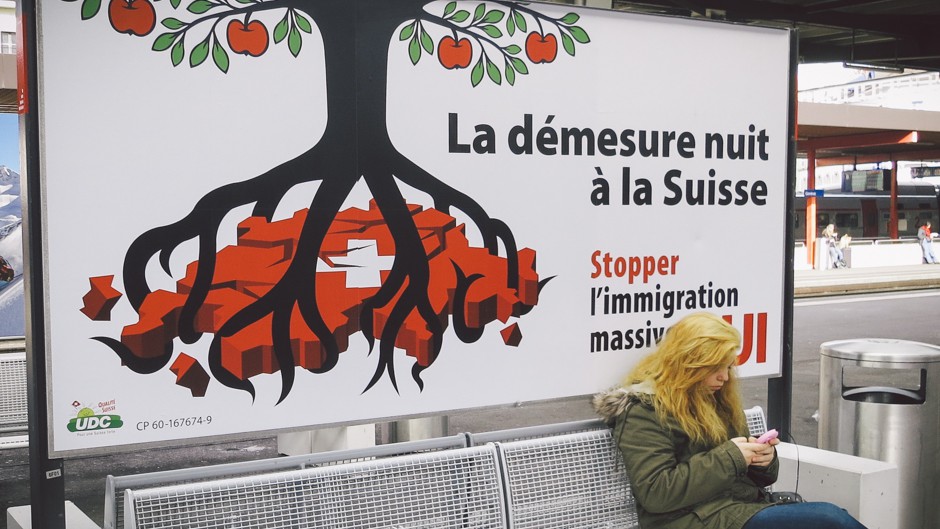 As it is not a member state and conducts its alliance on the basis of bilateral sector agreements, Switzerland’s relationship with the European Union has always been a little confusing. However, last week’s referendum that called for the country to renegotiate free movement treaties with the EU promises to make it even more so.

To examine what this vote really means, below is an analysis of Swiss referenda on migration within the context both of Swiss popular voting more generally and of recent wider European discontent.

The referendum needs to be seen within the wider context of referenda in Switzerland. As the scatter chart shows, Switzerland has seen increasing numbers of popular votes. The most recent one ‘against mass immigration’ is already the third of 2014 — the other two related to the financing of the public rail network and removing state funding for abortion and were accepted and rejected, respectively. For this reason, the Swiss situation cannot quite be equated to other countries’ proposed referenda on Europe (such as that attempted by current UK Prime Minister David Cameron) when, for those countries, putting motions to popular vote is extremely uncommon. 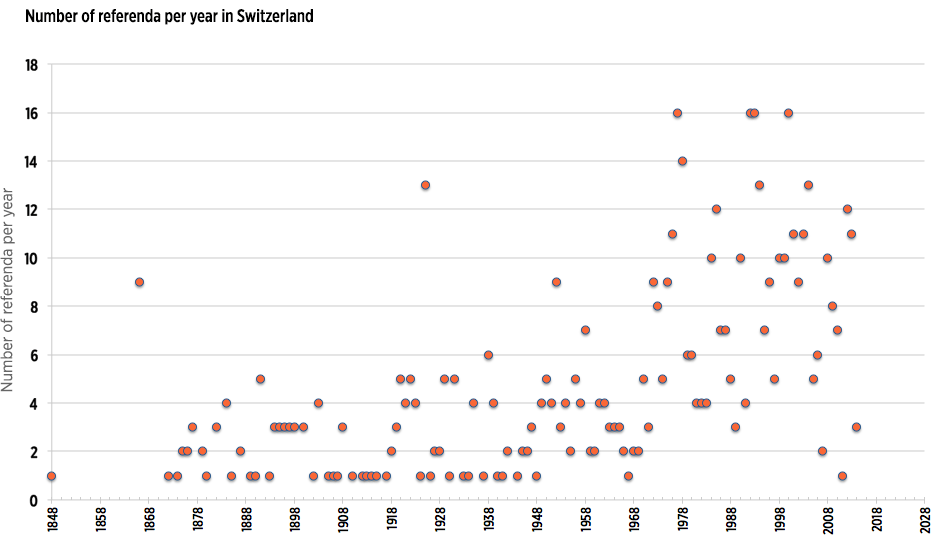 Chart compiled with data from the Swiss Chancellery.

With only 55.8 percent of Swiss people having participated in Sunday’s vote, and while higher than the average Swiss voter turnout, the 50.3 percent “yes” result represents only 28 percent of eligible Swiss voters (though, as similar results were found across cantons, this also reflects an easy majority of cantons). Indeed, seeing this referendum as proof of a popular Swiss dislike of immigration is a rather simplistic conclusion on a topic upon which care should always be taken.

A decade after Switzerland’s 1992 refusal to join the European single market, 2002 saw the free movement agreement between Switzerland and the EU agreed to by referendum. In 2009, five years later almost to the day, a protocol on the 2002 agreement was passed by a further referendum that also approved its extension to include Romania and Bulgaria. Last week’s vote needs to be seen as part of this process. The measure that was put to referendum calls for amendments to Switzerland’s immigration infrastructure, emphasizing a need for Swiss independence in the domain of immigration decision-making and the implementation of quotas or ‘ceilings’ on numbers of immigrants. This includes a renegotiation with Brussels of agreements in this area.

Much emphasis in the press coverage of the vote has been on the impact this will have on Swiss relations with Europe, particularly in terms of trade. However, the potential impact on asylum is also problematic. Indeed, the wording of the measure includes the specification that ceilings (quotas) apply for all the permits issued under immigration law, asylum matters included.

Recent years have seen other Swiss referenda relating to immigration hitting the international news. A referendum in 2009, also proposed by the Swiss People’s Party, banned the construction of minarets on mosques, and in 2010 another referendum approved the automatic deportation of non-citizens convicted of certain criminal offences.

Perhaps, then, this most recent case can be seen in the context of both the ‘multiculturalism has failed’ discourse engaged in by the leaders of the United Kingdom, Germany and France back in 2010 and 2011, and the more recent struggles against EU immigration in these countries. Indeed, this should be seen in the context of other European displays of discontent. Consider, for example, France and Italy’s push to reform Schengen agreements in response to high levels of migration from North Africa in 2011.

It has been argued that concern over unaddressed problems of social inequality can be channeled through fears of potential mass immigration. And, while Switzerland comes ninth best in the world on the inequality-adjusted human development index, a shortage of affordable housing in the country has been presented as one contributing factor to the immigration debate.

The narrow margin in Sunday’s referendum, as well as the low turnout, means that it is not possible to conclude from the vote that the desire to cap immigration is one generally held in Swiss society. Indeed, in a recent interview, Jan Atteslander, head of the foreign trade department of the Swiss Business Federation has described the current global situation as a “war for talent”, in which Switzerland does well, recruiting skilled foreigners to help drive its healthy economy. While the discontent shown in this vote may not indicate that the Swiss population as a whole is taking a stand against immigration, it does indicate that there is a level of discontentment that needs to be addressed.

Response from Switzerland’s neighbours has already been negative and although the Swiss People’s Party, which proposed the vote, declared on their website that “le Conseil fédéral doit agir rapidement” (the Federal Council must act quickly), it first needs to be established what action the measure really entails. Work will now be needed to ascertain how any such quota system on immigration could be organized.

Crucially, Switzerland will also now need to decide the extent to which it wants to sacrifice those agreements with Europe relating to immigration autonomy. In 2009, 59.7 percent of Swiss exports went to EU member states, and 78 percent of imports came from EU members, and the economy has benefited significantly from the reduced trade restrictions made possible by agreements with the EU.

At the time of the ban on minarets, a Swiss Muslim said: “Most painful for us is not the minaret ban, but the symbol sent by this vote”. In a similar manner, the Swiss International Chamber of Commerce stated that passing of the measure voted on last week “would send a clear signal against open markets and massively hurt internationally active Swiss businesses, who greatly contribute to affluence”.

Indeed, irrespective of how it is implemented, the results of this most recent popular vote will probably have effects for Switzerland and for Swiss relations internationally that are far beyond the core discussion of the immigration quota and whatever it may or may not mean about Swiss public opinion.

Are the Swiss Really Against EU Immigration Policy? by Tendayi Bloom is licensed under a Creative Commons Attribution-NonCommercial-ShareAlike 4.0 International License.