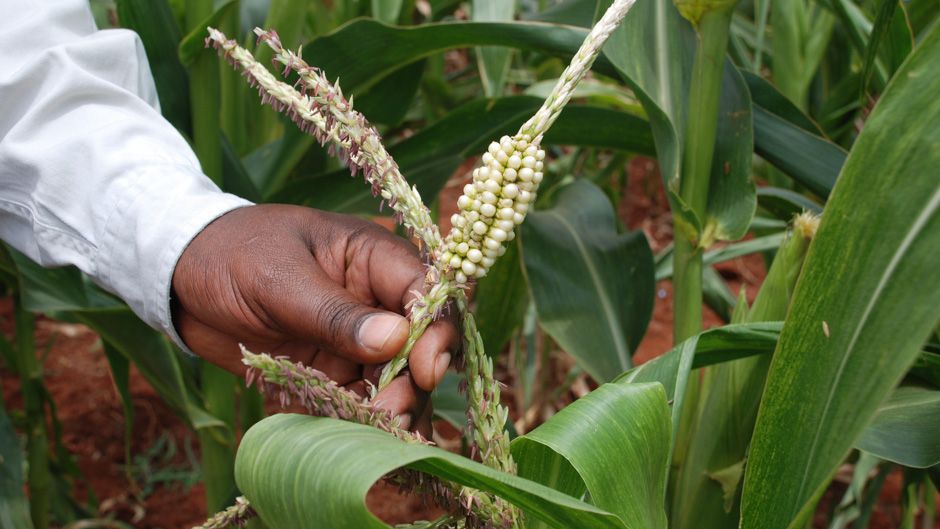 Despite numerous studies demonstrating the benefits of genetic modification (GM) technology — particularly its potential to increase food security in developing regions — the jury is still out on transgenic (genetically modified) crops. Publics around the world remain concerned about suspected potential risks, and media messages are often mixed. In this opinion piece, Dr. Ademola Adenle from UNU-IAS looks at the issues surrounding the adoption of GM crops and addresses the contentious question of “are transgenic crops safe?” He argues that transgenic crops should be given a chance in Africa to help solve the continent’s food, agriculture and human security challenges.

The controversies surrounding transgenic crops — a type of genetically modified organisms (GMOs) — underline the need to raise public awareness on GM technology in Africa. Around the globe, GM crop-producing countries have benefited by improved crop productivity, food security and quality of life. Increased income to resource-poor farmers has been a key benefit at the individual level, especially as most countries using this technology are in the developing world, including in Africa. However, given the ongoing debate, thorough scientific investigation into the safe application of GMOs is required, and should be accomplished by educating the public on the potential benefits and risks.

Why should GMOs be given a chance in Africa?

A growing body of evidence documents increased crop yields, higher farm income, and health and environment benefits associated with GM crops. In 1996, when GM crops were first officially commercialized, six countries around the world planted a total of 1.7 million hectares of GM crops. By 2010 this had grown to 148 million hectares in 29 countries (of which 19 countries were in the developing world). This 87-fold growth makes GM the fastest growing crop technology adopted in modern agriculture.

Of 15.4 million farmers that planted GM crops in 2010, over 90 percent (14.4 million) were resource-poor farmers in developing countries, including in three African countries: Burkina Faso, South Africa and Egypt. Almost 100,000 farmers in Burkina Faso cultivated GM cotton on 260,000 hectares in 2010 (representing a 126 percent increase from 2009), and GM crops are estimated to have benefited Burkina Faso’s economy by over US$100 million per year.

Similarly, in South Africa, the first and biggest producer of GM crops in Africa, GM technology is reported to have enhanced farm income by US$156 million in the period 1998 to 2006. South Africa is the only African country among the five principal GM-producing countries (along with India, Argentina, Brazil and China), and farmers there planted 63 million hectares of GM crops in 2010 alone.

While there are many documented benefits of GM crops, in contrast, there are few documented cases of potential health effects or economic drawbacks. Over the period of time that commercially available GM foods have been produced, no studies have indicated that GM foods are less safe than traditional counterparts. Nevertheless, the potential/perceived risks caused by GMOs continues to attract attention, particularly in Europe and further afield in the international media, which has led many people to condemn GMOs outright based upon unverified sources. Claims that GMOs could pose health risks to human beings, however, tend to be based on individual works promoted on websites or by NGOs, and are not backed-up by scientific research.

Moreover, the World Health Organization and the Food and Agriculture Organization of the United Nations have concluded that there is no scientific evidence that the application of GM technology has resulted in substantial human health effects or environmental problems. In spite of the lack of evidence, however, most European countries do not grow GM crops because European legislation has adopted a “precautionary principle” to ban GM crops.

Many policymakers and organizations in Africa thus see GM technology as something that should be avoided. In part, this can be attributed to a lack of awareness and education on the application of modern biotechnology. The public needs to be educated on both the potential economic benefits of GM crops and the general lack of scientific evidence of health-related issues when GM crops are consumed.

Africa must be saved from hunger

Given the high level of poverty, malnutrition and hunger and the low level of agricultural productivity in Africa, GM technology has great potential to offer solutions. But the controversy over the use of GM technology remains one of the biggest threats to its broad-based adoption.

The current regulatory approaches of the United States (US) and the European Union (EU) can play an important role in the adoption of GM technology in developing countries, particularly in Africa. While the US can allow commercial release of GMO products based upon standard tests, in the EU, GMO products can be stopped based upon scientific uncertainty alone according to the “precautionary principle”.

This precautionary principle has become a political tussle: reports have shown that developing countries in Africa and elsewhere consider their trade relationships with the EU before adopting GM crops, due to the fear of losing market access. As a result, African governments tend to exhibit a “go slow approach” towards GM technology, reflected in delayed approval of biosafety laws and lack of a biosafety system in many African countries. This caution is not restricted to African countries; other developing countries are suffering a similar fate. Moreover, it is unclear what roles international organizations such as the World Trade Organization and the Convention on Biological Diversity are playing in mediating the disputes between the US and the EU.

However, evidence shows that GM technology has great potential to improve agricultural productivity and farmers′ livelihoods in developing countries. GM technology must be allowed to play a part in alleviating hunger and poverty in Africa.

Given both the lack of global consensus on GMOs and the growing need to regulate GMO products, the US may offer a good example for Africa and the rest of the world. It is one of the few developed countries to grow GM crops on a commercial basis (more than 70 per cent of foods in the US contain GMOs) and is a leader in the safe application of GMO products.

Prior to releasing GMO products for human consumption in the US, products are compared with traditional counterparts in a variety of chemical, genetic, biochemical, compositional, nutritional and environmental tests as well as in comparison with known allergens. The US Food and Drug Administration (FDA) monitors all products containing GMOs through comprehensive safety and environmental testing. Other GM-producing countries, including Canada, Australia, China and Argentina, are carrying out similar tests to ensure that GMO products are safe for human consumption.

However, the US FDA cannot be compared with the majority of food and drug regulation departments in African countries, as the US — like many GM producing countries — has an effective regulatory system with an excellent track record in food safety. Nonetheless, with support from developed countries, it should be possible to increase local capacity for testing in Africa, and this should ensure the safe delivery of GMO products.

Embracing the “gene revolution” in Africa

Africa’s relatively slow embrace of the “gene revolution”, particularly GM technology, has, in part, stemmed from lack of access to GM crops available to beneficiaries such as farmers and scientists. This is partly due to international influence against GMOs.

The successful adoption of GM technology in Africa requires a concerted effort from African governments and developed countries to ensure successful transfer of the technology to potential beneficiaries. One of the major challenges is how to deal with intellectual property rights (IPR). GM technology is currently being applied to the production of commercial crops such as cotton, corn and soybeans. This can create difficulties for developing countries in accessing the technologies, as biotech companies are often reluctant to invest in the development of this new technology in Africa. (Most developing African countries do not have strong and effective IPR laws, which may partially explain why biotech companies are not attracted to the continent.)

Some hope, however, lies on the horizon, as the African Agricultural Technology Foundation is working to promote public-private partnerships to ensure that resource-poor farmers have access to technologies including GM. Efforts are also underway to develop GM crops that can benefit African farmers.

Agriculture plays a significant role in the economy of African countries in terms of gross domestic product, international trade, industrial development and creation of job opportunities. There is an urgent need to improve agricultural production. GM technology can be a part of the solution, in cases where traditional methods of farming have been less efficient.

African farmers need fast technology that can solve part of their agricultural problems. A concerted effort from developed countries must be put in place to ensure that Africa benefits from this new technology. African governments must also take the lead to come up with coherent strategies for adopting modern biotechnology and educating the public and key beneficiaries to increase understanding of transgenic crops.

This article is an abbreviated version of Adenle, A.A “Response to issues on GM agriculture in Africa: Are transgenic crops safe?”, BMC Research Notes 2011, Vol. 4:388.

Are Transgenic Crops Safe? GM Agriculture in Africa by Ademola Adenle is licensed under a Creative Commons Attribution-NonCommercial-ShareAlike 3.0 Unported License.

Ademola Adenle holds a PhD in Genetics and Molecular Toxicology from the University of Nottingham, UK, where he won the best student prize for his PhD research presentation at the British Toxicology Society’s Annual Congress in Surrey, UK. Ademola is a Japan Society for the Promotion of Science Fellow with the Science and Technology for Sustainable Societies team at the UNU Institute of Advanced Studies, and he is also a Visiting Scholar at the National Graduate Institute for Policy Studies. His current research focuses on the role of biotechnology in sustainable agriculture and climate change mitigation in developing countries.