Chinese investment in Africa has helped spark economic growth and improve social outcomes across the continent. Yet Chinese projects often seem to go hand in hand with civil protests. We wanted to find out whether these were isolated incidents or signalled broader discontent among the population.

In new research, we show that regions hosting Chinese-led projects are more likely to experience protests.

China’s financial involvement on the continent has grown dramatically since the launch of the Forum on China-Africa Cooperation (FOCAC) in 2000 and the China-Africa Development Fund in 2006. Today, China is Africa’s largest trading partner. China also spent an estimated US$350 billion (£250 million) on development programmes on the continent between 2000 and 2014 (the most recent data), on a par with what the US spent in the same period.

The social, economic, and political implications of this vast investment are subject to much controversy. Western countries are critical of China’s attempt to gain “soft power” (gaining economic and cultural power without coercion) on the continent, saying it might undermine good governance and human rights. But what do African citizens think about China’s impact on their lives?

It is easy to find evidence of protests against Chinese projects and investments. In the Kenyan archipelago of Lamu, for instance, residents and local businesses recently managed to block a proposed Chinese coal power plant, which they said would hurt the local tourist industry. People in the Gambia have protested against Chinese fish factories, which have drained waste into nearby wildlife reserves, hurting the local fish industry and the environment. In 2012, Zambian workers protested against low pay and hazardous working conditions in Chinese-run mines and even killed a Chinese manager.

Of course, these are just a few examples from across a huge continent —we wanted to explore whether there is a systematic link between Chinese projects and civil protests.

To do this, we used a global database on local protests that located around 125,000 protests across Africa and combined it with data on the location of Chinese projects across the continent. We did find a link: areas with more Chinese projects were more likely to experience protests. 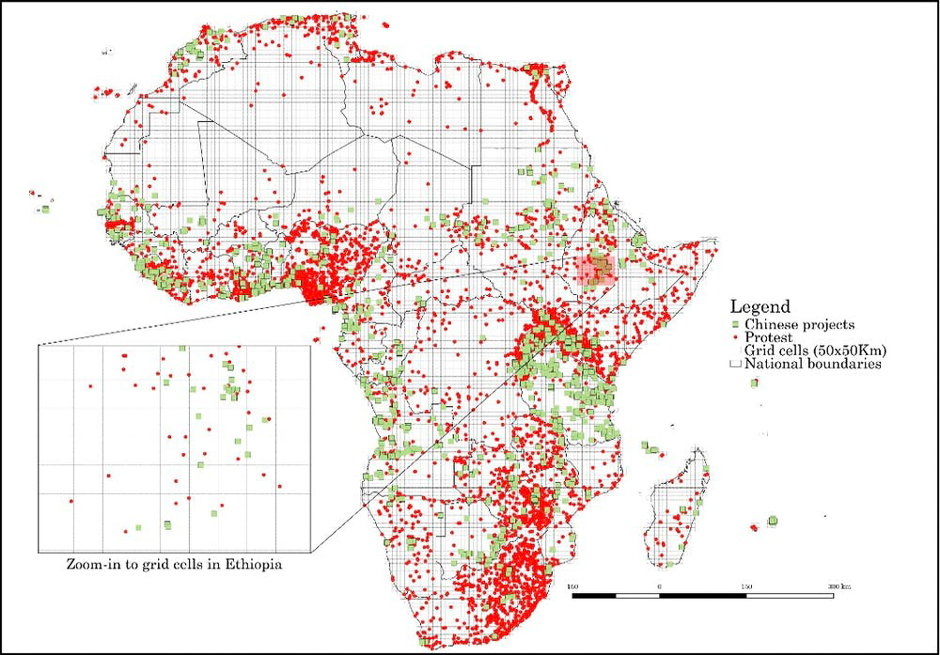 We also found that the type of project and its location matter. For instance, energy projects, often hydropower, are generally far away from towns and cities. By contrast, big infrastructure projects could be more likely to promote public demonstrations because they have visible effects on local and regional activities.

Perceptions influence and trust in governments

There are a couple of potential explanations for this link between projects and protests. First, we know from previous research that, compared with World Bank aid, Chinese finance is prone to being used by local elites to pursue their own interests and obtain many of the benefits, perhaps because of a lack of transparency in loan conditions, or because of China’s principle of not interfering in domestic affairs when granting loans, which gives local political leaders more power to allocate resources to projects. All this can lower citizens’ trust in their government institutions. When people lose trust in institutions, they may prefer protesting to voting. Our analysis confirms that areas with a larger number of Chinese projects do see lowered trust in local government.

Second, using data from the Afrobarometer, which surveys Africans on their view on democracy, governance and other issues, we observe a growing sense of China’s rising domestic economic influence among citizens who are more strongly exposed to Chinese projects. This perception can stir protests when citizens feel that the economic changes are serving Chinese rather than domestic interests.

But under what circumstances will citizens’ grievances and distrust effectively result in protests? Almost unsurprisingly, and reminiscent of the Arab spring, we find that improved mobile connectivity may have played an important role in helping citizens to coordinate.

Protests are an interesting way to explore how African citizens are responding to Chinese investment. A direct and legitimate form of political participation, protests can draw attention to grievances and to demand accountability from governments. Our study shows a systematic link between Chinese projects and the occurrence of protests.

Dr Bruno Martorano is Assistant Professor at the UNU Maastricht Economic and Social Research Institute on Innovation and Technology (UNU-MERIT).

Francesco Iacoella is a Researcher at the UNU Maastricht Economic and Social Research Institute on Innovation and Technology. His interests are vulnerability assessment and risk management in developing countries and humanitarian environments.

Laura Metzger is a Postdoctoral Fellow at the Center for International Development, Harvard Kennedy School.