Artificial Island Could Be Solution for Rising Pacific Sea Levels 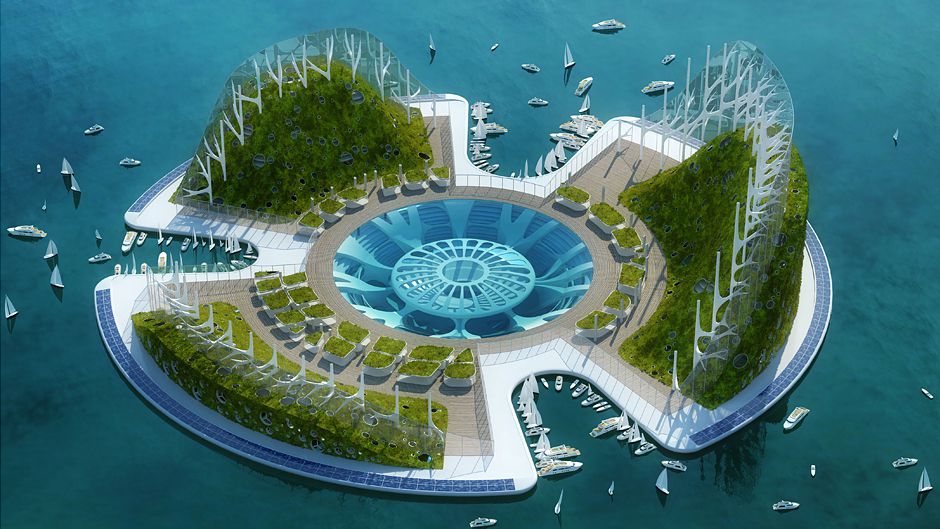 Sea levels are rising so fast that the tiny Pacific state of Kiribati is seriously considering moving its 100,000 people on to artificial islands. In a speech to the 16-nation Pacific Islands Forum this week, President Anote Tong said radical action may be needed and that he had been looking at a $2 billion plan that involved “structures resembling oil rigs”:

“The last time I saw the models, I was like ‘wow it’s like science fiction, almost like something in space. So modern, I don’t know if our people could live on it. But what would you do for your grandchildren? If you’re faced with the option of being submerged, with your family, would you jump on an oil rig like that? And [I] think the answer is ‘yes’. We are running out of options, so we are considering all of them.”

Kiribati is not alone. Tuvalu, Tonga, the Maldives, the Cook and the Solomon Islands are all losing the battle against the rising seas and are finding it tough to pay for sea defences. Kiribati faces an immediate bill of over $900 million just to protect its infrastructure.

But history shows there is no technological reason why the nation could not stay in the middle of the Pacific even if sea levels rose several feet.

The Uros people of Peru live on around 40 floating villages made of grasses in the middle of Lake Titicaca. Equally, the city of Tenochtitlan, the Aztec predecessor of Mexico City that was home to 250,000 people when the Spaniards arrived, stood on a small natural island in Lake Texcoco that was surrounded by hundreds of artificial islands.

More recently, Holland, Japan, Dubai, and Hong Kong have all built artificial islands for airports, or new housing. The mayor of London Boris Johnson has a vision of a giant international airport in the middle of the Thames estuary with five runways to replace Heathrow.

Kiribati could also take a lesson from the Maldives, where the rubbish of the capital city Male and the hundreds of tourist islands, is sent to the artificial island of Thilafushi. It’s growing about one square metre per day.

Neft Daslari, Stalin’s city in the middle of the Caspian sea, is still operational after more than 60 years. At its peak it housed over 5,000 oil workers 54.7 km (34 miles) off the Azerbaijan coastline. It began with a single path out over the water and grew to have over 300 km of streets, mainly built on the back of sunken ships.

Kiribati could emulate Spiral Island in Mexico. This was constructed by British artist Richard “Rishi” Sowa on a base of 250,000 plastic bottles. The island was destroyed by Hurricane Emily in 2005 but is being rebuilt. With millions of tonnes of rubbish already floating in the Pacific, and plans to collect it, Kiribati could solve two problems in one go.

[quote quote=”History shows there is no technological reason why the nation could not stay in the middle of the Pacific even if sea levels rose several feet.” type=”text” ]

But Tong’s imagination has been stirred by a more futuristic vision. It’s possible he’s seen the “Lilypad” floating city concept by the Belgian architect Vincent Callebaut. This “ecopolis” would not only be able to produce its own energy through solar, wind, tidal and biomass but would also process CO2 in the atmosphere and absorb it into its titanium dioxide skin.

Bangkok architects S+PBA have come up with the idea of a floating “wetropolis” to replace eventually the metropolis of Bangkok. They say that Bangkok is founded on marshes and with sea levels rising several centimetres a year and the population growing fast, it’s cheaper and more ecologically sound to embrace the rising seas than fight them.

Stranger still could be the German architect Wolf Hilbertz’s idea for a self-assembling sea city called Autopia Ampere. Hilbertz plans to use the process of electrodeposition to create an island that would build itself in the water. It would begin as a series of wire mesh armatures connected to a supply of low-voltage direct current produced by solar panels. The electrochemical reactions would draw up sea minerals over time, creating walls of calcium carbonate on the armatures.

Their idea is to build a series of physically linked oil-rig-type platforms anchored in international waters. The new state would be built by entrepreneurs and have no regulation, laws, no welfare, restrictions on weapons or moral code of ethics. Eventually, millions of “seasteading” people would live there.

Plans for a prototype are said to have been drawn up for the first diesel-powered, 12,000-tonne structure with room for 270 residents. Eventually, dozens — perhaps even hundreds — of these could be linked together, says Friedman who hopes to launch a flotilla of floating offices off the San Francisco coast next year.

In the end, it depends on money, which is in short supply for poor countries. If the world puts up several billion dollars — as Tong and his people would probably prefer — it would be technically possible for Kiribati to stay where it is.

Realistically, though, Australia, New Zealand and larger Pacific states are likely to be leaned on heavily to provide land for the Kiribatians and the world can expect a series of evacuations over the next 30 years.

This article was published on guardian.co.uk on Thursday 8 September 2011.