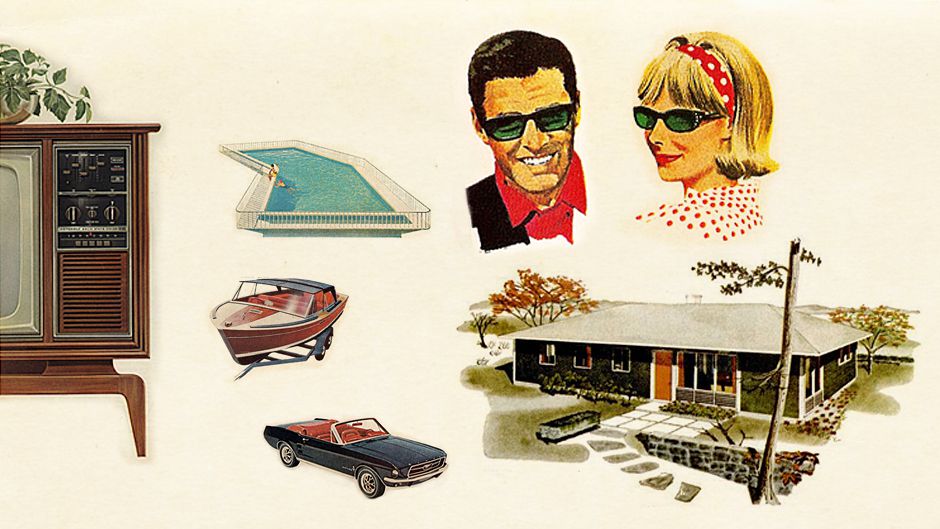 How much of this is real? How much of the economic growth of the past 60 years? Of the wealth and comfort, the salaries and pensions that older people accept as normal, even necessary? How much of it is an illusion, created by levels of borrowing — financial and ecological — that cannot be sustained? Go to Ireland and you’ll see that even bricks and mortar are a mirage: the marvels of the new economy, built on debt, stand empty and worthless.

To sustain the illusion, we have inflicted more damage since 1950 to the planet’s living systems than we achieved in the preceding 100,000 years. The damage will last for centuries; the benefits might not see out the year. Ireland, again, points a withered finger at the future. Among other iniquities, the government forced a motorway through the Gabhra Valley, part of a site — the Hill of Tara complex — comparable in its importance to Stonehenge. It was both an act of wilful vandalism and a notice of intent: no consideration would impede the economic miracle. The road hadn’t opened before the miracle collapsed.

Once our needs had been met, continued economic growth did most people few favours. During the second half of the growth frenzy, unemployment rose, inequality rose, social mobility declined, the poor lost amenities (such as housing) while the rich enhanced theirs. In 2004, at the height of the longest boom the UK has ever experienced, the Nuffield Foundation published this extraordinary finding: “Rises in mental health problems seem to be associated with improvements in economic conditions.”

Now, bar the shouting, it’s over. Last week the Wall Street consultant Nouriel Roubini, one of the few who predicted the financial crash, spelt out the fix we’re in. Governments cannot afford to bail out the banks again. Quantitative easing can no longer help, nor can currency depreciation. Italy and Spain will be forced, in effect, to default, and Germany won’t pay out any more. The successful capitalist reached this striking conclusion: “Karl Marx, it seems, was partly right in arguing that globalisation, financial intermediation run amok, and redistribution of income and wealth from labour to capital could lead capitalism to self-destruct.”

[quote quote=”At the height of the longest boom the UK has ever experienced, the Nuffield Foundation published this extraordinary finding: Rises in mental health problems seem to be associated with improvements in economic conditions.” type=”text” ]

Nor can the current economic system address the environmental crisis. Its advocates promised that economic growth and environmental damage could be decoupled: better technology and efficiency would allow us to use fewer resources even while increasing economic output. Nothing remotely like it has happened. In some cases there has been a decline in resource intensity, which means a lower use of materials per dollar of economic output but higher overall consumption. In some cases — such as iron ore, bauxite and cement — even this hasn’t happened: resource use per dollar has risen.

So far governments have responded to the renewed crisis of capitalism by frantically seeking to invoke the old magic again, to start the engine of creative destruction once more. The means to do so no longer exist. Even if they did, they would only delay and enlarge the underlying problems.

But now, in the wake of the English riots and faced with possible collapse, we are at last beginning to talk about the issues ignored while the illusion persisted: equality, exclusion, the feral rich and the discarded poor and, in WH Auden’s words, about “what the god had wrought / To please her son, the strong / Iron-hearted man-slaying Achilles / Who would not live long”.

The most hopeful sign that politicians might now be prepared to ask the big questions was the presence, in Ed Miliband’s pile of holiday reading, of Prof Tim Jackson’s book Prosperity Without Growth. It’s a revolutionary text, now two years old, whose time has come.

[quote quote=”Professor Jackson finds that the redistribution of both income and employment (through shorter working hours) is essential to the project. So is re-regulation of the banks, enhanced taxation of resources and pollution and measures to discourage manic consumption.” type=”text” ]

It points out that the financial crisis was caused not by isolated malpractice but by the systematic deregulation of the banks by governments, in order to stimulate economic growth by issuing more debt. Growth and the need to encourage it is the problem, and in the rich world it no longer bears any relationship to prosperity.

Jackson accepts that material wellbeing is a crucial component of prosperity, and that growth is essential to the wellbeing of the poorest nations. But in countries such as the UK, continued growth and the policies which promote it undermine prosperity, which he defines as freedom from adversity or affliction. This means, among other blessings, health, happiness, good relationships, strong communities, confidence about the future, a sense of meaning and purpose.

But how do you escape from growth without tanking the economy — and our prosperity? Under the current system, you can’t: when growth stops, it collapses. So Jackson has begun developing a macroeconomic model which would allow economic output to be stabilised. He experiments with raising the ratio of investment to consumption, changing the nature and conditions of investment and shifting the balance from private to public spending, while staying within tight constraints on the use of resources. He finds that the redistribution of both income and employment (through shorter working hours) is essential to the project. So is re-regulation of the banks, enhanced taxation of resources and pollution and measures to discourage manic consumption, such as tighter restrictions on advertising.

His system is not wholly different to today’s: people will still spend and save, companies will still produce goods and services, governments will still raise taxes and spend money. It requires more government intervention than we’re used to; but so does every option we face from now on, especially if we try to sustain the growth illusion. The results, though, are radically different: a stable, growthless economy which avoids both financial and ecological collapse.

From now on, as the old dream dies, nothing is straightforward. But at least we have the beginning of a plan.

This article was published on guardian.co.uk at on Monday 22 August 2011