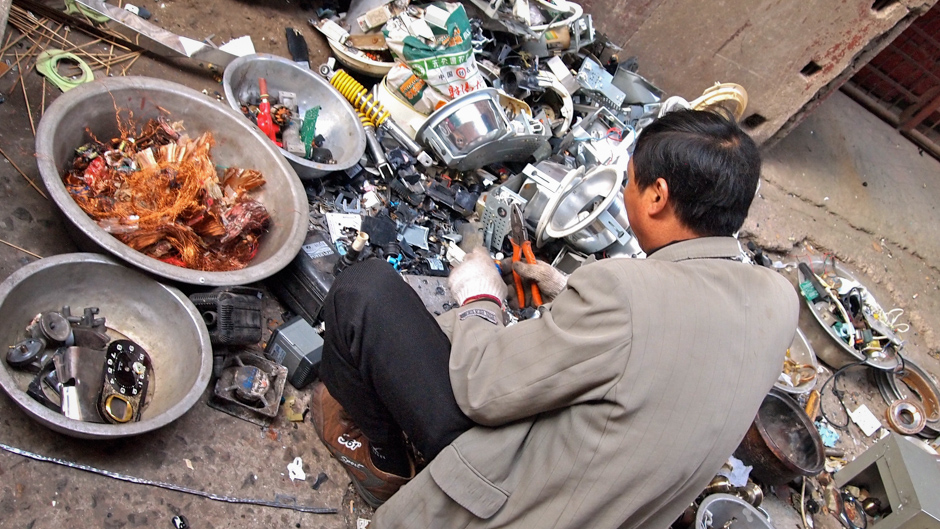 Waste not, want not. Unfortunately, this old adage has been overshadowed by a growing torrent of global demand for the latest and greatest consumer gadgets. Rapid technological advances, expanding product lines and planned obsolescence are pressuring consumers to opt for “out with the not-so-old and in with the new”. So what happens to the growing pile of “old”?

China, one of the leading producers and consumers of the world’s electric and electronic equipment (EEE), is also a primary destination for discarded products — electronic waste (e-waste). The country is thus grappling with the reality of an estimated 20 percent annual rise in domestically generated e-waste combined with a role as one of the planet’s primary dumping grounds for global e-waste — a massive environmental, social and economic burden.

The United Nations University Sustainable Cycles (SCYCLE) programme recently released an in-depth country study on the current state of waste EEE in China. The report is one outcome from a collaboration between the United States Environmental Protection Agency, the China Ministry of Environmental Protection and the UNU-hosted StEP (Solving the E-waste Problem) Initiative.

The research analysed EEE consumption, domestic and transboundary e-waste flows, e-waste collection and recycling sectors, legislative progress and e-waste stakeholders. The initial goal of the study was to inform discussions in Beijing in July 2012 at the “Stakeholder Workshop & StEP Open Meeting in China”. Meant as an interactive platform, the workshop sought to identify the roles and responsibilities of different government agencies, industry and technical institutions and other stakeholders, and to facilitate cooperation between and among stakeholders, enhance communication and avoid duplication of efforts.

The final report also incorporates results from the meeting including key priorities for future development of e-waste management in China that were proposed and discussed throughout the workshop.

But the national market is certainly not the only source for discarded EEE in China. Despite the country’s ban on all e-waste imports, enacted in 2000, legal loopholes on transboundary imports remain. For starters, the country’s “One Country, Two Systems” policy prevents e-waste from entering Mainland China, but allows for licensed imports at Hong Kong’s ports. From Hong Kong, e-waste can be exported to other countries or easily (and legally) moved into Mainland China.

This transboundary path to Hong Kong can be traced back to a number of sources, primarily North America, Europe and Japan. Although the report was able to reference many instances of illegal e-waste imports through Hong Kong, the researchers note that the “actual quantity of illegal e-waste and second-hand EEE shipped into China is difficult to estimate due to a lack of systematic accounting and first-hand investigation”.

Beyond the questions of exactly where it all comes from, the growing amount of e-waste in China is a quantitative reality and perhaps the most pressing questions surround how e-waste is processed. In terms of the complex collection and recycling networks, the clearest distinction is between informal and formal sectors, with each playing unique roles in China’s challenge to handle e-waste sustainably.

Because formal collectors are normally part of tax-paying business entities, they are positioned as crucial links in the success of Chinese government legislation. A notable example is the National Development and Reform Commission’s pilot programme on e-waste collection (2003–2006). The programme focused on constructing recycling plants in four target regions and demonstrated that recycling facilities face significant challenges to regular and efficient operation without a proper collection system in place to ensure a constant supply of waste to the facilities.

This led to the successful “Home Appliance Old for New Rebate Program” (2009–2011), which saw new-purchase discounts given to consumers who disposed of old appliances through government-subsidised collectors. The formal collectors provide a licensed system that can “deliver the collected e-waste to legitimate recyclers for environmentally-sound treatment.”

Over 80 percent of the 61.3 million home appliances collected and treated in China by the formal sector in 2011 — 84 percent of which were televisions — were collected through the “Home Appliance Old for New Rebate Program”.

The researchers concluded that the informal collection system is equally (yet differently) effective “because individual collectors can efficiently reach almost any household, while urban residents (consumers) are doubly incentivised to sell to collectors because they are able to generate cash from obsolete and waste household items while at the same time saving the time and effort that would have been required to dispose of the items themselves. The effectiveness of the informal collection system increases the rates of re-use and material recycling, keeping these materials out of the general waste stream and reducing the need for resource extraction.”

In terms of recycling, however, the positives do not appear as balanced. Informal recyclers “generally use substandard processes and lack the appropriate facilities to safeguard human health and the environment… Substandard informal recycling practices…pose direct risks to the health of workers and to the local environment.”

These human and environmental impacts have become well-known in recent years due to graphic high-profile coverage of illegal e-waste processing in Chinese towns such as Guiyu, just across the border from Hong Kong.

But despite the continued setbacks of the informal recycling sector, the study noted that “under the progressive development of pilot projects and domestic e-waste legislation over the past five years, the formal e-waste recycling industry in China has shown considerable growth in both treatment capacity and quality”. As a result, around 61 million major home appliances were collected and treated by formal recyclers in 2011.

To encourage formal sector growth the Chinese government has issued a number of environmental laws, regulations and technical guidance over the past decade while also collaborating on national and international e-waste projects. The study highlighted five pivotal policies and laws related to e-waste processing including:

But these policies are only as good as their enforcement. For example, substantial administrative reforms in customs control need to be achieved in order to close legal loopholes such as Hong Kong transit and to block illegal transboundary shipments across other land and seaport borders.

In an effort to help guide e-waste reform, a number of partnerships have developed over the past decade bringing in expertise of the national and global community. The research spotlights the initial work between Switzerland and China as demonstrating that “improvements can be made on critical environmental issues in developing countries through diplomatic collaboration, knowledge exchange and technology transfer”.

The success of the Swiss-Chinese collaboration laid the foundation for further partnerships such as the StEP Initiative’s Best-of-2-Worlds project that aims to “find an eco-efficient approach to carrying out e-waste recycling while also complying with environmental, health and safety standards and fulfilling all existing legal requirements”. Additional collaborations with UNEP and the Dutch Government have promoted technological developments and built platforms bringing together educational and research institutions, the private sector and government organisations from both China and abroad to cooperate on the issue of solid waste management in China.

Stakeholders in China’s e-waste landscape include a diverse mix of institutions, agencies, researchers, private companies and industrial groups. A key result of the research was an exhaustive “system map of the relevant stakeholders in e-waste management in China”. This analysis of actors contributed a systematic assessment of the scale, roles and influence of e-waste actors in China.

Through its broad analysis of the recent e-waste situation in China, the study makes it clear that there is still plenty of work to be done to overcome the country’s e-waste obstacles. Recommendations include:

As the StEP research notes, “China now appears to be the largest e-waste dumping site in the world, receiving shipments from the US, Europe and neighbouring Asian countries, including South Korea and Japan.” Because of this, the country’s management of e-waste and future e-waste legal frameworks will have crucial influence on the environmental impacts of used and discarded electronics at the national and international level. Meanwhile, China’s and the world’s consumption of electric and electronic goods will only grow.