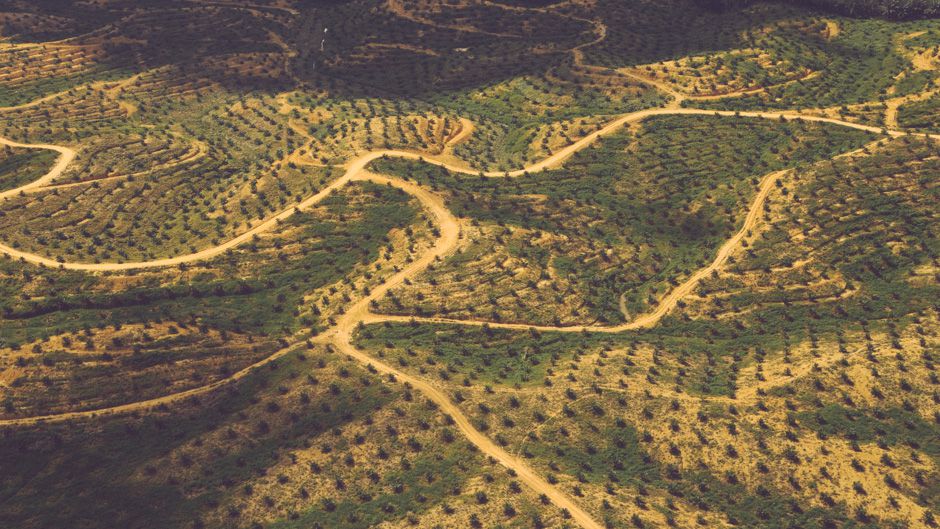 The great versatility of palm oil makes it a ubiquitous commodity and basic ingredient of much of the world’s processed food. It is the most widely used oil in cosmetics and household cleaners. Globally its use is increasing massively.
However, widespread evidence reveals that careless development of oil palm plantations is destroying forests, drying out peat-swamps, threatening already endangered species, polluting air and waterways, exacerbating climate change, dispossessing indigenous peoples and impoverishing the rural poor.

In Indonesia, the clearing of forest for oil palm plantations has caused devastating forest fires, while in Thailand, oil palm and rubber plantations were blamed for causing a horrific landslide that killed at least forty people in April 2011. In Sarawak (Malaysia), Papua New Guinea (PNG) and Sumatra (Indonesia), oil palm plantations have contributed to severe pollution of local rivers, threatening both the livelihoods and physical well being of local inhabitants.

Greasing the wheels of development

Paradoxically, palm oil is often promoted by governments of Southeast Asia as a source of renewable energy that forms part of their climate change mitigation efforts. This is despite growing evidence that palm oil is far from ecologically sound or sustainable, particularly due to the opening up of carbon-rich forests’ peat lands to establish plantations.

Even more disturbing is the persecution, eviction, forceful relocation, criminalisation and even killing of indigenous peoples and local community members as a result of conflicts over State-sanctioned land grabbing by corporations in violation of their rights.

A common trend in palm oil producing Southeast Asian countries is the frequent, if not entrenched, neglect or misinterpretation of local inhabitants’ right to Free, Prior and Informed Consent (FPIC). FPIC is now a right enshrined in international human rights law, such as the United Declaration on the Rights of Indigenous Peoples 2007.

Of particular relevance in the case of oil palm development is the violation of the rights of indigenous peoples in relation to their rights to land and land use, particularly since many of the areas where palm plantations are established are forested areas that have been inhabited by indigenous communities for generations. They have been managed according to customary laws and are of central importance to indigenous peoples’ culture, sense of identity and survival as a community, including in places like Sarawak.

Worse still, land used or targeted for oil palm expansion in Southeast Asia is commonly claimed by States as vacant, idle or degraded land, when in fact most of these areas are existing agricultural lands and indigenous peoples’ traditional territories, encumbered by customary rights and central to local communities’ livelihoods and socio-cultural identities.

A report published by Forest Peoples Programme (FPP) in November 2011 documents how PT Asiatic Persada, a subsidiary of Singapore-based palm oil giant Wilmar International, contracted mobile police brigades (BRIMOB) in a week-long operation to systematically evict some 83 families from their homes and bulldoze their dwellings in the south of an oil palm concession in Jambi, Indonesia.  BRIMOB attacked, without prior warning to the inhabitants, shooting in the air and hounding men, women and children from their homes. Physical injury, psychological trauma and general dispossession have resulted from these attacks.

In the words of one community member that the investigation team interviewed, “we are cut off from our traditional sources of income, food and natural resources, through the clearing of our forests to plant oil palm and the restriction on our movements and settlement within the concession. Rivers run shallow and thick with mud and pollution. Fruit trees planted by the communities have been cut down. Denied the right to use the land, we cannot grow crops for subsistence. […] Each community is an open wound.”

Research also shows that palm oil development need not always be bad news. A 2011 study on the expansion of oil palm across Southeast Asia shows that where farmers and indigenous peoples’ land is secure and there is rule of law, oil palm tends to be developed as a smallholder crop with better outcomes in terms of livelihoods. However, where land rights are insecure or law enforcement is weak, oil palm tends to be developed in the form of large estates with problems for prior occupants and ensuing land conflicts and human rights abuses.

Environmental damage caused by palm oil expansion is inextricably linked to human rights abuses as it deprives local communities of their right to a healthy environment conducive to development, to food security and to the sustainability of their livelihoods which are primarily dependent on natural resources and the land they have customarily lived on, occupied or otherwise used.

This situation brings to mind the notion of ecocide, defined by international environmental rights lawyer and barrister Polly Higgins as the “extensive destruction, damage to or loss of ecosystem(s) of a given territory, whether by human agency or by other causes, to such an extent that peaceful enjoyment by the inhabitants of that territory has been severely diminished”. A United Kingdom-led campaign is now underway for the United Nations to have ecocide recognised as a “crime against peace”.

The widespread violation of human rights in agri-business expansion stimulated a landmark workshop in December 2011 on “Human Rights and Business: Plural Legal Approaches to Conflict Resolution, Institutional Strengthening and Legal Reform”. The workshop was held in Bali, convened by the Indonesian National Human Rights Commission and organised by FPP and Indonesian NGO SawitWatch, with the support of the Rights and Resources Initiative, Samdhana Institute and RECOFTC – The Center for People and Forests. It was attended by the National Human Rights Commissioners of the Southeast Asian region, a member of the United Nations Permanent Forum on Indigenous Issues, and opened by UN Special Rapporteur on the Right to Food, Olivier de Schutter.

This is the first time that the National Human Rights Commissions of Southeast Asia have come together to discuss and establish a standard with respect to human rights and business. The principal point that came out of the workshop was that companies have an obligation to respect human rights regardless of whether or not the country they operate in does. This is very important as weak national laws are often used by companies as an excuse to neglect human rights.

Drawing from the report “Protect, Respect and Remedy: a Framework for Business and Human Rights” (2008) by the United Nations Secretary-General’s Special Representative on Business and Human Rights, Professor John Ruggie, the Bali Declaration stresses that the responsibility of corporations to respect human rights is a global standard of expected conduct for all business enterprises wherever they operate. It exists independently of states’ abilities and/or willingness to fulfill their own human rights obligations, and does not diminish those obligations. Moreover, it exists over and above compliance with national laws and regulations protecting human rights.

It is expected that the Bali Declaration will encourage governments and legislatures in the Southeast Asian region to take urgent steps to reform national laws and policies relating to land tenure, agrarian reform, land use planning and land acquisition.

Such reforms can enable emerging countries to comply fully with their human rights obligations, including the right to food, the right of all peoples to freely dispose of their natural wealth and resources, and the right not to be deprived of their means of subsistence. Sustained lobbying by local and international NGOs for national reforms is paving the way towards change, although the process remains challenging. Consumer awareness-raising is another channel through which sustainably produced palm oil can be promoted and private sector companies are now beginning to work closely with NGOs to develop sustainable sourcing strategies for commodities such as soy, palm oil, beef, paper, coffee and cocoa.

Because palm oil is often labelled as “vegetable fat” or “vegetable oil” it is difficult for the public to exercise choice in terms of consumption. And while almost four per cent of global palm oil production has been certified as sustainable by the Roundtable on Sustainable Palm Oil, sluggish demand from palm oil buyers such as supermarkets could undermine the success of sustainability efforts. Although many companies say they want to begin sourcing palm oil sustainably, few clear targets and time frames are set out for this transition.