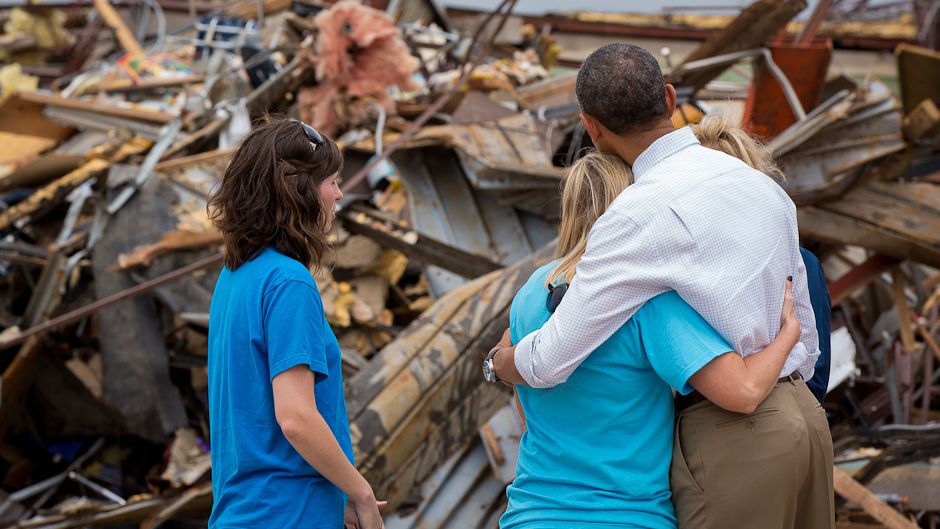 In a speech on Tuesday at Georgetown University, delivered outdoors on a sweltering hot day, Obama went further than any previous US president in outlining a comprehensive strategy for dealing with climate change. He also said he would continue to press the issue as a priority of his second term even in the face of implacable opposition from Republicans in Congress.

“I refuse to condemn your generation and future generations to a planet that’s beyond fixing,” Obama said to a gathering of students.

Obama outlined a broad range of measures to cut greenhouse gas emissions and promote the development of renewable energy, protect coastlines and cities from flooding and sea-level rise, and encourage efforts to reach a global climate deal.

The over-arching goal was to put the US on track to meet its commitment to cut carbon emissions 17 percent from 2005 levels by the end of the decade.

But Obama’s boldest move by far was the decision to bypass a deadlocked Congress and issue an executive memo to the Environmental Protection Agency, calling for new rules curbing greenhouse gas emissions from power plants.

Such measures were long overdue, Obama said. “Power plants can still dump limitless carbon pollution into the air for free,” he said. “That’s not right, that’s not safe and it needs to stop.”

Curbing emissions from power plants would be the single-most significant action against climate change in Obama’s power. Power plants are responsible for a third of America’s greenhouse gas emissions.

The decision won Obama widespread praise from fellow Democrats and environmental campaigners. Al Gore said the address was the “best speech on climate by any president”.

Barbara Boxer, the California Democrat who chairs the Senate environment and public works committee, said: “The president is using all the tools in his tool box and I applaud him for that.”

As anticipated, however, the measure ran into fierce opposition from Republicans and industry, even before Obama had delivered his speech. But the president pushed back on the idea that he was overstepping by ordering the EPA to act. “The idea of setting higher pollution standards for our power plants is not new.  It’s just time for Washington to catch up with the rest of the country,” he said.

Obama also said he was willing to work across the political divide but would not tolerate attempts to cast doubt on the science underlying climate change. “We don’t have time for a meeting of the flat earth society,” Obama said to applause.

The president took on another contentious issue — the Keystone tar sands pipeline, which campaigners have cast as the defining environmental issue of the day.

Obama gave no indication of how he will decide on the project, which would open up Canada’s vast store of carbon. However, he offered campaigners a measure of reassurance, saying climate implications would be critical to making a final determination. “The net effects of pipeline impact on our climate will be absolutely critical in determining if the project is allowed to go forward,” he said.

Elsewhere, Obama broke with campaigners, and even many of his fellow Democrats, embracing America’s natural gas boom, made possible through fracking, as a transition fuel. He also reiterated support for nuclear power.

Many of those who praised Obama for regulating power plants, such as boxer, urged him to take the next step and put a price on carbon dioxide emissions. There was no mention of such a measure in his speech.

But there was still overwhelmingly strong support among an environmental community that has often been frustrated and disappointed with the president on climate change.

“This is the change Americans have been waiting for on climate. President Obama is finally putting action behind his words,” said Michael Brune, executive director of the Sierra Club — although he went on to ask the president to stop the Keystone pipeline.

Obama claimed climate change as one of his core issues in his inauguration address. He stoked expectations even further in his state of the union address in February, telling Congress to act on climate change — or he would.

With Tuesday’s speech, however, Obama appears to have firmly adopted climate action as his own brand.

Administration officials briefing reporters on the climate plan said the White House hoped to propose the rules for existing power plants by June 2014, finalising the rules one year later. They said proposed rules for new plants could be forthcoming as early as September. That timetable could set in place mechanisms to deliver meaningful cuts in greenhouse gas emissions by the time Obama leaves office.

But there are bound to be legal and political challenges, and it was not immediately clear how stringent the new power plant rules would be. It was also unclear how the actions promised by Obama would play out in the long term.

Most analysts believed at the time that America’s original 17 percent emissions target was too low to avoid serious climate change. There was even greater uncertainty about whether America would be on track for the even more ambitious mid-century target of an 80 percent cut in emissions. That would depend on the stringency of the EPA measures, and how quickly the new rules could be adopted.

The significance of Tuesday’s strategy will only become apparent in time, said Van Jones, a co-founder of the activist group Rebuild the Dream and Obama’s former White House green jobs advisor.

This article originally appeared on guardian.co.uk on 25 June 2013.

What Ever Happened to the Green New Deal?