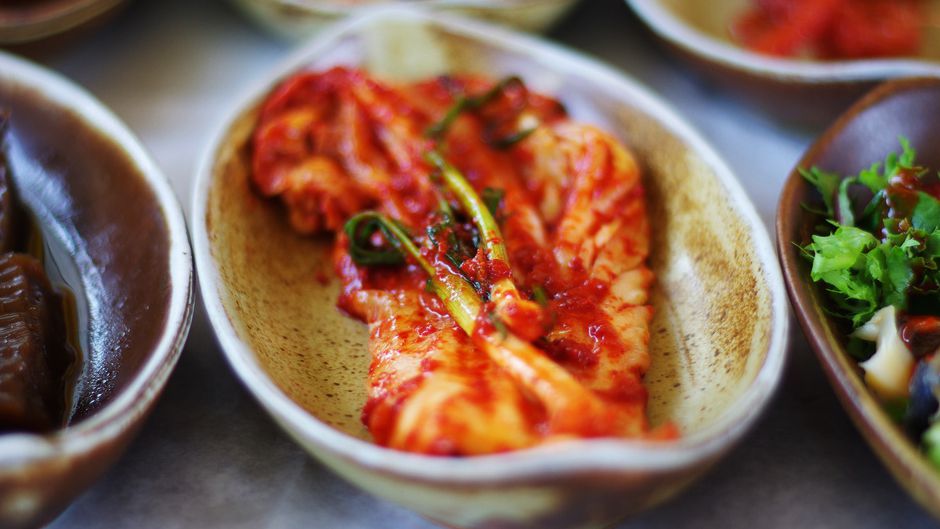 All around the world, fermented foods and beverages are part of the human diet. In some places they make up a minor 5 percent of daily intake, while in others their role can be as substantial as 40 percent.

Using native knowledge of locally available raw materials from plant or animal sources, people across the globe produce this type of food and drink either naturally or by adding starter cultures that contain micro-organisms. Micro-organisms transform these raw materials both biochemically (i.e., the nutrients) and organoleptically (i.e., the taste/texture/odour) into edible products that are culturally acceptable to the maker and consumer.

Fermented foods can be fried, boiled or candied, or consumed in curries, stews, side dishes, pickles, confectionery, salads, soups and desserts. They can be in the form of pastes, seasonings, condiments, masticators, and even colourants. Fermented drinks can be either alcoholic (such as beer and wine) or non-alcoholic, like butter milk, certain teas, or things that contain vinegar.

However, though most fermented foods have health-promoting benefits, their global consumption is declining as traditional food systems give way to the influence of a western diet and fast foods.

A world of therapeutic food

Many of the fermented products consumed by different ethnic groups have therapeutic values. Some of the most widely known are fermented milks (i.e., yoghurt, curds). Containing high concentrations of pro-biotic bacteria, these can lower your cholesterol level.

Kefir is easily digested and provides beneficial micro-organisms that contribute to a healthy immune system.

One fermented food that has received much attention is the viscous, acidic, mildly alcoholic milk beverage produced by fermentation of milk with a particular grain in Eastern European and Middle Eastern countries. Kefir is easily digested and provides the human body with beneficial micro-organisms that contribute to a healthy immune system — a boon to patients suffering from AIDS, chronic fatigue syndrome, herpes and cancer.  Traditionally it has been used for the treatment of tuberculosis and cancer. Another naturally fermented dairy product, koumiss, found in the Caucasus region, is used in the treatment of pulmonary tuberculosis. 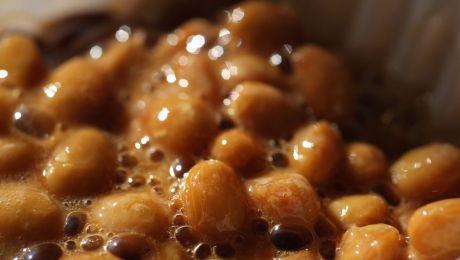 Antioxidant and other properties are reported in foods such as natto, a sticky Japanese dish high in protein. Photo: MF Corwin.

Other widely-eaten types of health-boosting sustenance include fermented soybean products found around Asia. Antioxidant and other properties are reported to exist in foods such as natto, a sticky dish high in protein and popular at breakfast in Japan, that may help prevent people from having brain haemorrhages. Natto is also rich in vitamin K2, which stimulates the formation of bones and might help to prevent osteoporosis in older people. Similarly, consumption of Indonesia’s tempe reduces cholesterol levels and, like China’s douchi, lowers high blood pressure.

Korea’s famous accompaniment, kimchi, may take the prize for most benefits however, reportedly helping to prevent constipation and colon cancer and reduce serum cholesterol, as well as possessing anti-stress effects and the ability to ameliorate depression, osteoarthritis, liver disease, obesity and atherosclerosis.

In the Himalayas, a fermented leafy vegetable product called gundruk and a fermented radish tap-root (sinki) have large amounts of lactic acids, ascorbic acid, carotene and dietary fibre, which have anti-carcinogenic effects. In order to gain strength, ailing persons and post-natal women in the Himalayas consume bhaati jaanr extract (a fermented rice food-beverage) and kodo ko jaanr (a fermented finger millet product) due to their high calorie content.

One of the important outcomes of food fermentation is the enrichment of food with essential amino acids, vitamins, mineral and bioactive compounds. For example, during tempe fermentation, vitamins like niacin and riboflavin are increased by using the starter culture Rhizopus oligosporus. Similarly, thiamine and riboflavin increase during fermentation of idli, the fermented rice and black-gram (a type of legume) product of India and Sri Lanka. 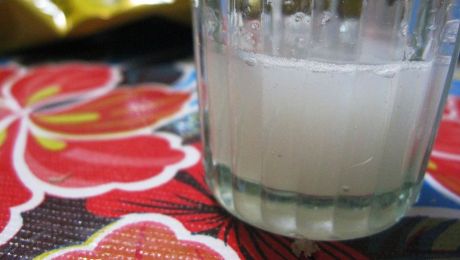 Pulque is one of the oldest alcoholic beverages and is prepared from the juices of cactus plants in Mexico. Photo: Shira Golding.

These clever processes developed by humans to extract additional nutritional value from food, are not only found in Asia. Pulque — one of the oldest alcoholic beverages prepared from the juices of cactus plants in Mexico — is rich in vitamins such as thiamine, riboflavin, niacin and biotin.

Another important reason to ferment foods is to coax micro-organisms into producing enzymes that also provide very useful services. These enzymes degrade anti-nutritive compounds and thereby make edible, with enhanced flavour and aroma, things that otherwise would be indigestible and/or unpalatable. Bitter varieties of cassava tubers contain a potentially poisonous substance that can be detoxified via lactic acid bacteria, as in gari and fufu, fermented cassava root products from Africa.

Many people suffer from lactose intolerance or lactose malabsorption, a condition that causes lactose, the principal carbohydrate of milk, to not be completely digested. The cultures used in making yoghurt and curds, contain substantial quantities of ß-D-galactosidase, something that is thought to help alleviate the symptoms of lactose malabsorption. Yoghurt, as a viscous food, may delay the stomach emptying and that way help lessen lactose intolerant symptoms.

Healthy, but not appreciated

Even when fermented foods are being consumed, they are increasingly likely to be from packets in supermarkets, rather than directly from households or a local family run business. This is leading to fewer and fewer people possessing traditional knowledge of fermented foods and the ability to make these from scratch. Reliance on fewer providers of fermented foods is also leading to a decline in the biodiversity of micro-organisms, or ‘microbial-biodiversity’. I will explore these topics in more detail in a follow-up article.

For more on this topic, you may wish to read Fermented Foods and Beverages of the World, which was co-edited by the author of this article. With contributions from 24 seasoned fermentation authorities, this book is an up-to-date review on fermentation practices, covering its storied past, cultural aspects, microbiology, biochemistry, nutrition and functionality.

Professor Jyoti Prakash Tamang is an expert on fermented foods of the world, focusing on food culture, microbiology, nutrition, and functional property. He currently teaches Microbiology in Sikkim Central University, India. Previously he was a United Nations University Fellow and did post-doctorate research at the National Food Research Institute (Japan). Prof. Tamang has authored two books: Himalayan Fermented Foods: Microbiology, Nutrition, and Ethnic Values; and Fermented Foods and Beverages of the World — both published by CRC Press, Taylor & Francis of USA.