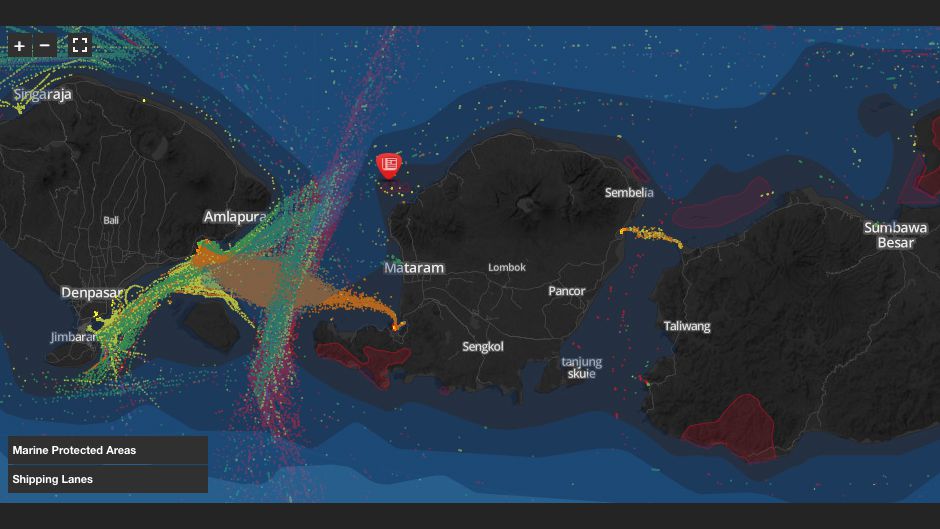 Nearly every local story has a global context. This is especially true when it comes to the environment, and there may be no better way to show that context than through visualization. But in developing countries, where so many important changes are happening, journalists often lack the resources or skills to make data visualization a part of their repertoire.

With this in mind, Internews’ Earth Journalism Network (a project for which I serve as coordinator) and the Brazilian environmental news agency O Eco, worked together to pioneer the concept of “geojournalism” by launching InfoAmazonia at the United Nations Conference on Sustainable Development in Rio de Janeiro.

InfoAmazonia is an interactive mapping platform that hosts richly designed maps about environmental issues in the Amazon basin, serving as a growing center for discussion about the status of the world’s largest rainforest. Maps made on the site can be used as open repositories for current data from a wide-range of stakeholders and can be embedded on partners’ websites and social media. Since launch, it’s grown to become a trusted source for up-to-date visualizations and data focused on the nine countries of the region. 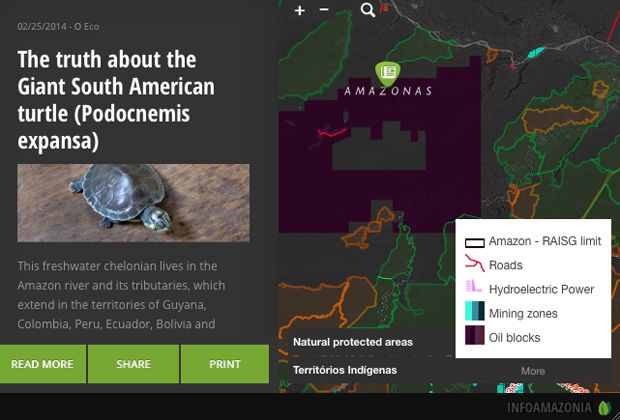 As InfoAmazonia has matured, so has the idea of geojournalism, a story-telling technique that combines layers of geo-tagged stories with data as a form of evidence for journalistic narratives. While for many conventional news stories, data visualization serves as an add-on or side course, geojournalism strives to make it part of the main meal — and easier to produce to boot.

Since InfoAmazonia’s debut in June 2012, the number of sibling geojournalism sites, which emulate the same model and use many of the same tools but focus on different geographic areas, has grown to three plus the GeoJournalism Handbook — a set of online tutorials for journalists looking to learn more about how to incorporate data into their environmental reporting.

The newest of the websites is Ekuatorial, which provides timely news and visualizations about the oceans, forests, and natural disasters of Indonesia. Built in collaboration between the Society of Indonesian Environmental Journalists (SIEJ) and the Earth Journalism Network with technical assistance from ((o))EcoLab, Ekuatorial takes the lessons learned from InfoAmazonia and adapts then to the Indonesian context. Like InfoAmazonia, Ekuatorial provides easy to interpret, up-to-date, and sharable maps about Indonesia’s natural resources overlaid with stories contributed by member journalists from SIEJ and partner media houses.

Among the new strategies Ekuatorial applies is integration with SIEJ’s nationwide network of journalists. Priority has been given to stories from local media houses in areas closest to major environmental changes, enabling journalists to share breaking environmental news between media houses and provide local perspectives to international audiences.

The ability to amplify on-the-ground reporting has become a trademark of geojournalism projects since published stories are location specific and often come from remote areas that may be outside mainstream attention. For example, the Oxpeckers Center for Investigative Environmental Journalism, a group of South African journalists, are tracking rhino poaching in the country’s national parks have applied geojournalism techniques to create stories around each reported instance of poaching in the country.

Similarly, Internews Kenya has recently launched Land Quest to bolster the capacity of Kenyan journalists to report on how both international development and private financing is being realized on the ground. Built by an international team of investigative reporters, Land Quest focuses on two regions in Kenya. The first is Turkana, where newly discovered oil and water in an otherwise barren desert are changing the landscape of some of the country’s poorest people and the humanitarian groups that serve them. The second region is Lake Naivasha where there is confrontation between agro-industrialists, which supply much of Europe’s annual flower imports, and non-profit groups, working to protect water quality, defend labor rights and resettle internally displaced people. 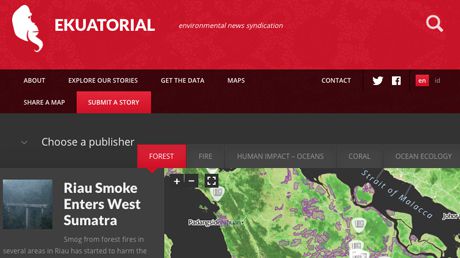 Trying to track changes among this diverse set of actors with any degree of usefulness would be a challenge for even the most statistically savvy. But the Land Quest team devised a unique strategy for making highly granular data about water wells more than unintelligible clusters of dots. As a user clicks through each symbol, Land Quest reveals the area the symbol covers to quickly guide the user to the specific location of a single well.

From Kenya and South Africa to Indonesia and the Amazon, mapping journalistic narratives alongside data about development and the changing environment underscores the relationship between people, power, politics, and place.

Each of these projects springs from the spark of seeing a project like InfoAmazonia realized and imagining the potential for geojournalism to be applied to new and unexpected regions. The team behind InfoAmazonia has provided technical support on each of these projects, and with the further development of tools like the GeoJournalism Handbook and innovations from companies like MapBox and CartoDB, there is more to come.

This Earth Journalism Network post is reproduced with permission.

Data Working for Us, Not Against Us