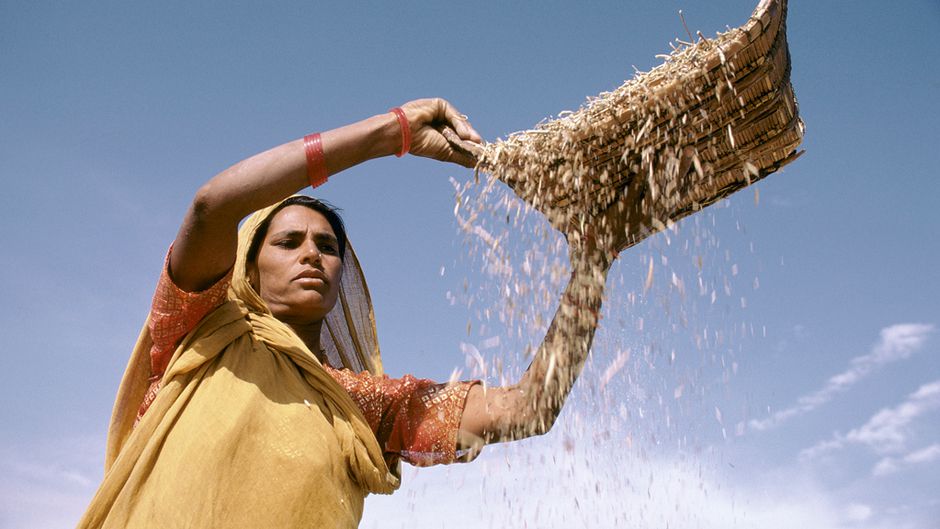 Human well-being implies an overall sense of welfare of people, at both the individual and the social group level.  However, in recent years there is also growing recognition of the vital relationship between biological resources, well-functioning ecosystems and economic development at multiple levels, particularly at that of vulnerable local communities.

The myriad links between cultural and biological diversity are increasingly viewed as key elements in achieving sustainable development and the Millennium Development Goals, according to the United Nations Education, Scientific and Cultural Organisation (UNESCO).

While ways of designing and implementing policies to strengthen/rebuild such bio-cultural links are still being explored, it is increasingly clear that communities are taking proactive entrepreneurial measures to address their needs. Such actions spring from sustainability concerns as well as from a desire to preserve long-standing cultural assets — such as shrines, sacred mountains, etc. — that have long been home for local biological diversity, be it monkeys, birds, tortoises, plants or insects.

At the local level, rural people are usually organized into social groups on the basis of shared ethnicity, religion, interests and activities. They often depend on natural materials, with livelihoods hinged primarily on production activities, making them highly reliant on ecosystems and bio-cultural resources.

These ties local people have to their ecosystem give rise to systems of stewardship, management and governance that are based on local principles, values and norms, but that operate within legal frameworks of their countries.

In a globalising economy, increasing pressures on natural resources generally lead to decreased access and benefit for local communities and augments poverty. This often results in exploitative and unsustainable use of natural resources by communities, often jeopardizing their livelihood options.

However, there are instances where local communities are increasingly breaking with unsustainable use and are becoming more entrepreneurial with the use of resources. In the process, communities are re-emphasising their rights under international, national and customary laws, as well as negotiating and establishing norms that facilitate ‘bottom-up’ development.

Such endogenous (from within) development means that the primary stakeholders — local communities — are determining, leading and controlling initiatives to improve their well-being.

As one example of bottom-up development, Kalavathi — a farmer in Karnataka, India — is conserving a popular, traditional rice variety called Rajmudi. The Rajmudi she cultivates is certified organically and is marketed by Sahaja Organics, a sales initiative of Sahaja Samrudha, an organization established by a group of farmers to “exchange ideas, seeds and share knowledge on sustainable agriculture”.

A major success factor of the Sahaja Samrudha bio-enterprise relates to the fact that it is a civil society partnership of around 140 individual farmers and 30 organisations engaged in direct marketing. Farmer’s groups, women’s groups and consumer groups work together to revive the farming culture and community in South India.

Bio-enterprises are defined as community driven enterprises that depend on natural resources and could result from attempts at self-determination. This aspiration is cognizant of not just economic development but underpins augmentation of natural productive resources, social harmony and in some cases even spiritual fulfilment.

The Convention on Biological Diversity (CBD) has brought concerns related to conservation of biological diversity and ecosystems within a utilitarian framework. While the primary focus is on conserving biodiversity, it clearly recognizes measures for sustainable and equitable use in the supply chain of a biological resource [in Articles 1 and 15(7)].

The CBD also acknowledges the need for respectful interactions with communities with respect to their resources, knowledge, practices and institutions [in Articles 8j and 10c].

While several indicators of relevance to policymaking find resonance in the community context, the communities’ definitions of what constitutes their well-being are often not taken into account.

While health security has been defined as “improved access to health facilities”, some communities have highlighted that they are concerned about preventive and promotive aspects of health, and hence focus more on nutritional security in their activities. These insights have prompted communities to undertake organic agriculture activities, focusing on a diversity of species that are staple to the diet of the community members (as did Sahaja Samrudha), and to immediate domestic markets.

A starker example of differences in worldviews relates to the concepts of equity and autonomy in various community contexts. While equitable partnership with external stakeholders is recognized as an important element of community well-being,
intra-community equity in terms of gender parity or non-discrimination is not a uniformly defined concept.

In many African cultures, for example, men and women play different roles that are accepted in the community as the norm. For instance, traditional queens and their counterpart chiefs in Ghana have different but equally important roles. Whereas the chief is the most visible where it comes to political decision-making, the queen is most visible during king-making of the chief.

[quote quote=”Strengthening endogenous development means facilitating cultural interfacing that could result in a new but acceptable worldview to the community.”  type=”image” image=”3157″ ]

An outsider might see inequity because he or she is using different lenses to view the gender relations and would immediately question why the chiefs and queens are not sitting side by side during political decision-making. Yet, worldviews are dynamic and can be influenced to address negative aspects, if approached from a culturally sensitive perspective. This is what is entailed in strengthening the endogenous development process in communities.

Strengthening endogenous development means facilitating cultural interfacing that could result in a new but acceptable worldview to the community. Some communities have gained from women-led initiatives or by achieving the right to certain degrees of autonomy and self-determination within or independent of state governance systems. This generally involves some form of rights based movement that requires the involvement or consent of all members in their community.

While communities prefer to have rights of autonomy and governance over their resources and activities, countries seek to ensure that these are subsumed within national priorities. The degree of autonomy legally deployable by communities then plays out in terms of assertion of human rights, rights to resources, native lands and ecosystems and traditional knowledge and practices.

Communities engaged in bio-enterprises identify easy access to biological resources, ecosystems, and knowledge as important factors in the establishment of an enterprise activity. Most communities further demonstrate a preference for balancing reciprocity relationships with nonmonetized economies, where practicable.

Customary values, beliefs and norms inform local peoples’ well-being and the process of priority-setting in bio-enterprise development. Generally, all try to assert their cultural and spiritual mores. Even when the activities of local and indigenous peoples include modern systems, processes and technologies, they generally are linked to the underlying principles behind such mores.

Linkages with modern systems can be seen in production activities for profit, catering to external markets, use of inputs like new seeds or credit systems — all of which are usually considered exogenous to their contexts. However, these may well fit with the traditional ways of seed development, trade and subsistence economies that are cognizant of the spiritual and social values of a community.

One example comes from a case study done by AGRUCO (an agro-ecological centre of Bolivia’s San Simon University). Each year, on the seventh Friday after Easter, a special fair takes place in the small Town of Sipe Sipe near Cochabamba, Bolivia. Farmers from different agricultural ecosystems exchange their recently harvested produce in one of these three ways:

In the Andean culture, there are three levels of the reciprocity economy:

This example and others illustrate that while community actions and thinking in the quest for development are dynamic and constantly evolving, there is a strong sense of ‘rootedness’ that guides their actions. This ‘rootedness’ is steeped in cultural values and a sense of identity.

For instance, the preferential maintenance of sacred areas over other land uses underlines the importance of these areas in determining local communities relationships to their land and resources. Other examples such as the practice of traditional arts or crafts and similar also relate to this sense of identity.

Community bio-enterprises could provide a viable and effective option to achieve these same objectives. However, this would require a sensitive and clear policy approach that is mindful of local priorities and aspirations.

This article is derived from a United Nations University Institute of Advanced Studies (UNU-IAS) policy brief written by Suneetha M. Subramanian, Wim Hiemstra and Bas Verschuuren and forms part of a larger study on assessment of community well-being being led by UNU-IAS in collaboration with UNEP, COMPAS and UNDP Equator Initiative.

Wim Hiemstra is senior advisor at ETC Foundation, the Netherlands, a not-for profit foundation  facilitating innovative international networks in participatory rural development, energy and health. He has edited and authored many articles and books on sustainable agriculture and bio-cultural diversity. He is currently the international coordinator of the COMPAS – Comparing and Supporting Endogenous Development, a programme operating in 15 countries in Africa, Asia and Latin America.

Bas Verschuuren is associate coordinator with the ETC-COMPAS Network. He is the co-Chair of IUCN’s Specialist group on Cultural and Spiritual Values of Protected Areas and works as a Biocultural Researcher and Consultant with Earth Collective’s Cultural Values and Nature Initiative. Bas has experience in working with local and indigenous communities on conservation and development issues in North, Central and South America, Asia, Africa and Australia. Bas has authored and edited several scientific and popular articles and books and particularly enjoys doing applied multidisciplinary research in support of management and policy making.

Suneetha M. Subramanian is Research Fellow at the United Nations University’s Institute of Advanced Studies, Japan. She has been researching on bio-enterprises, benefit sharing and their socio-economic-political implications. Her current research interests pertain to ecosystem services valuation from a multi-stakeholder and multi-scalar perspective, and in identifying policy-practice linkages that improve the well-being of local communities and their ecosystems.