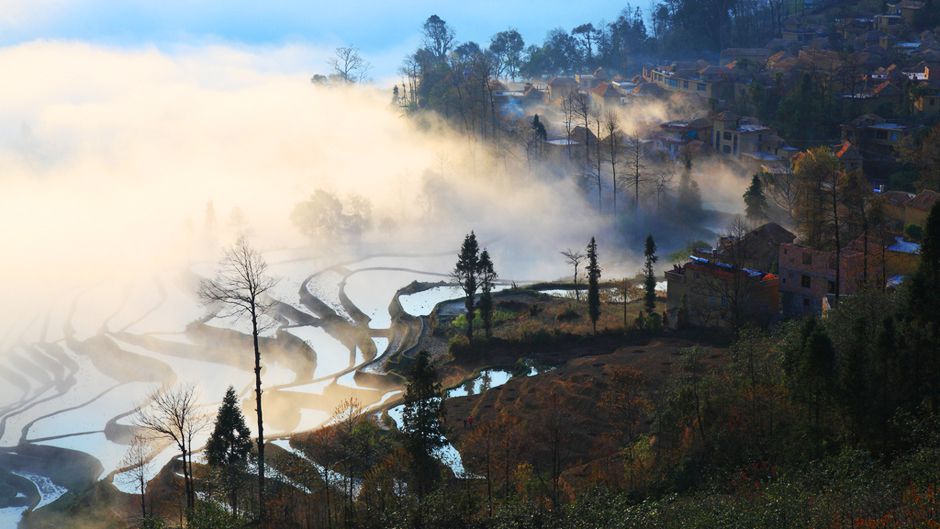 Much of the Earth’s land is now used for production of food, fibre and timber.

Cropland and pasture together account for 38 percent of the world’s land area. While forests cover another 30 percent, two thirds of that is used for forestry. Conservation of biodiversity must therefore go beyond the protected areas that account for only a small percentage of the earth and begin covering dominant forms of land use.

Although agriculture is often named as a major cause of biodiversity loss, many agricultural systems do embrace it, including through crop choice and also via management of land, water and biota as a whole. Relying upon acquired local knowledge, there are communities around the world that respect the limits and understand the secrets of their surroundings. Biodiversity helps farmers adapt to environmental uncertainty and constraints. When integrated with agricultural practices, biodiversity thus allows them to reap an enduring bounty.

This article discusses how the Hani people of Yunnan’s Ailao Mountains have harnessed the products and services of the ecosystems they inhabit to sustain their livelihoods over generations.

Most of the Hani in China live in the mountainous area between the upper Yuan-Red River in the north, and the upper Lancang-Mekong River in the south of Yunnan. The Hani in the northern part of this mountainous area have a long tradition of rice terrace agriculture. The local climate consists of a wet season from June to October and a dry season from November to May. The nursery and transplanting of rice seedlings take place in the latter part of the dry season and the early part of the wet season when the rainfall is unreliable. 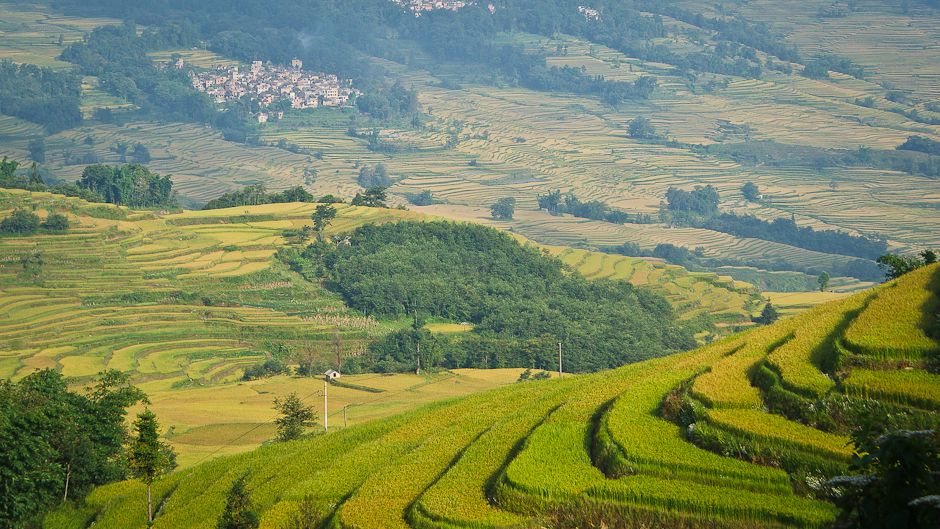 The Hani people of Yunnan’s Ailao Mountains have harnessed the products and services of the ecosystems they inhabit to sustain their livelihoods over generations.

The elevation of the Ailao Mountains, home to numerous Hani and other ethnic villages, ranges from some 100 meters in its deep valleys to some 3,000 meters. This huge topographical relief results in a vertical diversity of ecological zones — from tropical in the valleys, to subtropical, to temperate and finally, to alpine zones on the mountain top.

The Hani proverb “Bush meat is hunted in the high mountain, rice cultivated in the low mountain, and children born in the middle mountain”, illustrates how the people have embraced vertical diversity through their traditional livelihoods.

The mountaintop, where the climate is wet and cold, consists of forests, grassland and ponds and provides a variety of goods and services, such as wood, wild food plants and game, herbal medicine, fodder, fish cultures and watersheds. In this zone, tea gardens are also distributed and cardamom is cultivated as an understory crop.

Below this forest zone, where the climate is mild, villages have been built at an elevation of 1,800-1,900 meters. Below the village (middle mountain) zone sits the warmer agricultural zone. Here, at an elevation of 800 to 1,800 meters, extensive rice terraces are distributed across the low mountain slope and dry fields are kept for production of maize, wheat, potato, beans, buckwheat and vegetables. In addition, numerous patches of natural and artificial forests for production of wood and conservation of water and soil are scattered in this agriculture zone. 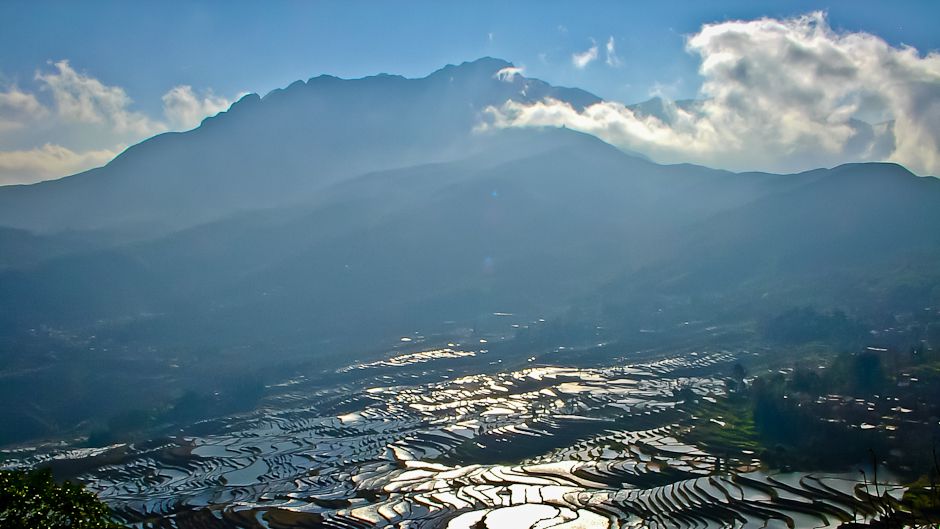 At an elevation of 800 to 1,800 meters, extensive rice terraces are distributed across the low mountain slope and dry fields are kept for production of maize, wheat, potato, beans, buckwheat and vegetables.

The hot valley is mainly inhabited by the Dai people who practice intensive rice cultivation, with two to three crops a year, and often have rice surpluses. Taking advantage of each other’s strengths, the Dai people have a tradition of exchanging rice for firewood with the Hani people. The Hani and the Dai also share buffalo and spread the burden of buffalo husbandry between them.

Forests, the lifeblood of water

Extensive natural forests are protected on the mountaintop in order to conserve water. Forests intercept rainfall and enhance the ability of soil to store water and allow groundwater to be recharged during the wet season. With little rainfall over the dry season, the forests help harvest dew from the heavy fog. In addition, the forests along streams and rivers are preserved and planted, and many tree areas are preserved in the rice terraces. 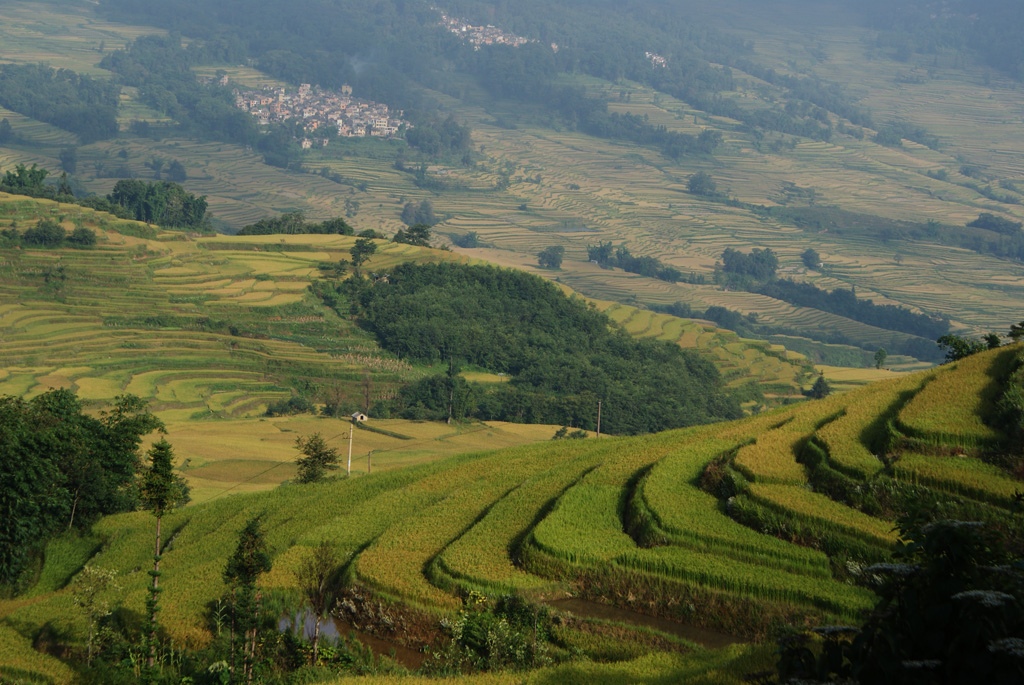 The Hani protect and plant trees around their villages through scenic forests that separate human space from “ghost” space, and protect villagers from strong winds and landslides. In contrast, other forests in the Ailao Mountains contain hundreds of edible plants (like wild mushrooms, vegetables, nuts, fruits) and insects, and medicinal plants, which are important to local livelihoods.

Finally, forests are not only essential to rice cultivation, but also to the Hani people’s spiritual well-being. The Hani believe that their village deity lives in the forests. Every village has or shares a patch of natural forest under strict protection for the village deity. The ritual for worshipping the village deity is held annually in order to educate younger generations about how to care for the forests.

To grow their staple crop, rice, the Hani people select gentle slopes with access to water sources in the Ailao Mountain and convert them to vast terraced areas. Since it is rather difficult to use water flowing from the Red River in the deep valley, instead, the Hani, over centuries, have developed a complex irrigation system to harvest and divert springs, seepage, creeks and streams towards the rice terraces.

Long ditches constructed to control water flows are distributed into secondary and tertiary-level ditches through stones or wood, within which small openings are cut. The volume of water flow is determined by the size of the opening, which is dependent on the amount of rice requiring irrigation. Surplus water is drained from the upper rice fields to the lower rice fields through sluices that include a bamboo sieve to prevent large fish from escaping. Rice terraces also operate as artificial wetlands, helping to store water and contain erosion. Water in the rice fields is not drained in the dry season in order to save water for the next crop.

Fish not only provide farmers with an important source of protein and income, but also help control insects and weeds, and enrich the soil in the rice fields.

In addition to water distribution, the Hani people also use the irrigation system to transport fertilizers like forest litter and livestock manure, thereby saving time and input costs. This customary management of the irrigation system ensures that water resources are shared among villagers and that the systems are well maintained.

The rice terraces are also used to raise and collect a variety of aquatic species, including various fish (e.g., carp, eel and loach), ducks, snails, shrimps and crabs for food, and wild plants for fodder. Local people cultivate soybeans and a popular Yunnan herb known as the “fishy-smell” herb (Houttuynia cordata).

In order to support the fish culture in the rice fields, families breed fish in small ponds built along the creeks and streams in the watershed. After rice seedlings are transplanted, the breeding fish are taken to the rice fish to produce fish fry that will then grow in rice terraces. Fish not only provide farmers with an important source of protein and income, but also help control insects and weeds, and enrich the soil in the rice fields. Another benefit is that when there is a shortage of water, local farmers may switch from rice cultivation to dry farming of other crops, such as maize and vegetables.

The Hani people have embraced forest, rice and fish biodiversity and ecosystem services in the Ailao Mountains to meet their different needs. Their agricultural system has withstood the test of history and is outstanding example for others to learn from. Appropriately, it is now listed as one of the UN Food and Agriculture Organisation’s Globally Important Agricultural Heritage System.

The spectacular landscape of the Hani rice terraces and their unique ethnic culture attract increasing number of tourists from other parts of China and abroad. Nevertheless, the potential impact of global climate change may stretch the capacity of traditional systems.

In response, the United Nations University Institute for Sustainability and Peace (UNU-ISP) is initiating a new study over the next few years as part of the University Network for Climate and Ecosystems Change Adaptation Research (UN-CECAR) to assess the potential impacts of climate change and identify an adaptation strategy that will be built on traditional ecosystem-based approaches, in order to meet future challenges. The adaptation strategy is expected to emphasize the role of traditional knowledge, including forest and watershed protection,  crop diversity in climate change adaptation, as well as propose new on-site measures to reduce the risk of climate change induced floods and droughts.

Our hope is that by working together to blend traditional and scientific knowledge, the Hani will continue to be able to live sustainably.

The author wishes to thank Ms. Zhang Hongzhen and Mr. Zhang Hongkang at the Honghe Prefecture Bureau of Hani Terrace Management, Dr. Jiao Yuanmei of Yunnan Normal University, Prof. Wang Qinghua of the Yunnan Academy of Social Sciences and local officials and farmers for sharing their knowledge and information as well as for their hospitality during a field visit.

Biodiversity in the Hani Cultural Landscape by Luohui Liang is licensed under a Creative Commons Attribution-NonCommercial-ShareAlike 3.0 Unported License.

Luohui Liang is an Academic Programme Officer of the Global Change and Sustainability Section at the United Nations University Institute for Sustainability and Peace (UNU-ISP), Tokyo. Previously he was the Managing Coordinator of the UNU global initiative on People, Land Management and Environmental Change (PLEC) (1998 to 2002), an Honorary Research Fellow at the University of Aberdeen, Scotland (1995-1996) and a Land Use Planning Officer at the Yunnan Bureau of Land Management, China (1987-1998). His research interest covers sustainable management of land and biodiversity in agricultural landscapes.