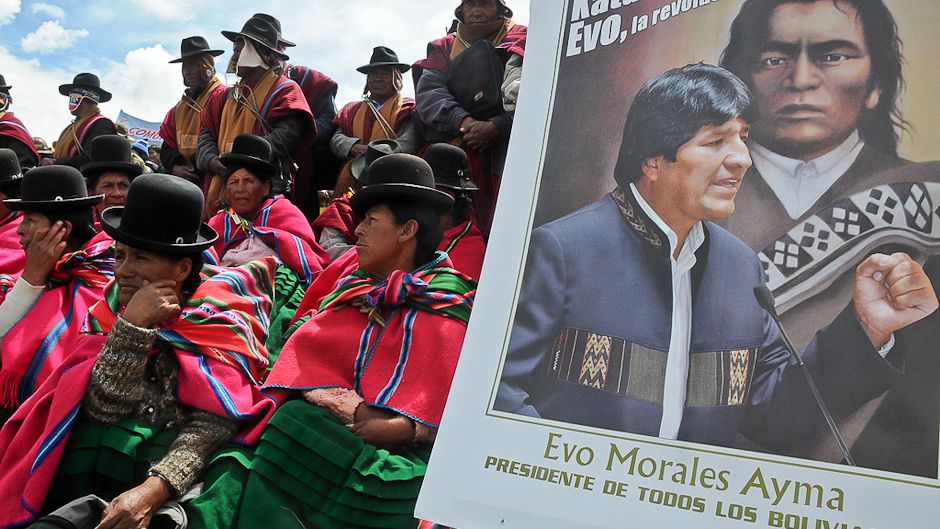 Photo: Presidency of the Republic of Ecuador.

It was 11 a.m. and Evo Morales had turned a football stadium into a giant classroom, marshalling an array of props: paper plates, plastic cups, disposable raincoats, handcrafted gourds, wooden plates and multicoloured ponchos. All came into play to make his main point: to fight climate change “we need to recover the values of the indigenous people”.

Yet wealthy countries have little interest in learning these lessons and are instead pushing through a plan that, at its best, would raise average global temperatures 2°C. “That would mean the melting of the Andean and Himalayan glaciers,” Morales told the thousands gathered in the stadium, part of the World People’s Conference on Climate Change and the Rights of Mother Earth. What he didn’t have to say is that the Bolivian people, no matter how sustainably they choose to live, have no power to save their glaciers.

Bolivia’s climate summit has had moments of joy, levity and absurdity. Yet underneath it all you can feel the emotion that provoked this gathering: rage against helplessness. It’s little wonder. Bolivia is in the midst of a dramatic political transformation, one that has nationalised key industries and elevated the voices of indigenous peoples as never before. But when it comes to Bolivia’s most pressing, existential crisis – the fact that its glaciers are melting at an alarming rate, threatening the water supply in two major cities – Bolivians are powerless to do anything to change their fate on their own.

That’s because the actions causing the melting are taking place not in Bolivia but on the highways and in the industrial zones of heavily industrialised countries. In Copenhagen, leaders of endangered nations like Bolivia and Tuvalu argued passionately for the kind of deep emissions cuts that could avert catastrophe. They were politely told that the political will in the north just wasn’t there.

More than that, the United States made clear that it didn’t need small countries like Bolivia to be part of a climate solution. It would negotiate a deal with other heavy emitters behind closed doors, and the rest of the world would be informed of the results and invited to sign on, which is precisely what happened with the Copenhagen accord.

When Bolivia and Ecuador refused to rubberstamp the accord, the US government cut their climate aid by $3 million and $2.5 million respectively. “It’s not a freerider process,” explained US climate negotiator Jonathan Pershing. (Anyone wondering why activists from the global south reject the idea of “climate aid” and are instead demanding repayment of “climate debts” has their answer here.)

Pershing’s message was chilling: if you are poor, you don’t have the right to prioritise your own survival. When Morales invited “social movements and Mother Earth’s defenders … scientists, academics, lawyers and governments” to Cochabamba for a new kind of climate summit, it was a revolt against this experience of helplessness, an attempt to build a base of power behind the right to survive.

The Bolivian government got the ball rolling by proposing four big ideas: that nature should be granted rights that protect ecosystems from annihilation (a “universal declaration of Mother Earth rights”); that those who violate those rights and other international environmental agreements should face legal consequences (a “climate justice tribunal”); that poor countries should receive various forms of compensation for a crisis they are facing but had little role in creating (“climate debt”); and that there should be a mechanism for people around the world to express their views on these topics (“world people’s referendum on climate change”).

The next stage was to invite global civil society to hash out the details. Seventeen working groups were struck and, after weeks of online discussion, they met for a week in Cochabamba with the goal of presenting their final recommendations at the summit’s end. The process is fascinating but far from perfect (for instance, as Jim Shultz of the Democracy Center pointed out, the working group on the referendum apparently spent more time arguing about adding a question on abolishing capitalism than on discussing how in the world you run a global referendum). Yet Bolivia’s enthusiastic commitment to participatory democracy may well prove the summit’s most important contribution.

That’s because, after the Copenhagen debacle, an exceedingly dangerous talking point went viral: the real culprit of the breakdown was democracy itself. The UN process, giving equal votes to 192 countries, was simply too unwieldy – better to find the solutions in small groups.

Even trusted environmental voices like James Lovelock fell prey: “I have a feeling that climate change may be an issue as severe as a war,” he told the Guardian recently. “It may be necessary to put democracy on hold for a while.” But in reality, it is such small groupings – like the invitation-only club that rammed through the Copenhagen accord – that have caused us to lose ground, weakening already inadequate existing agreements. By contrast, the climate change policy brought to Copenhagen by Bolivia was drafted by social movements through a participatory process, and the end result was the most transformative and radical vision so far.

With the Cochabamba summit, Bolivia is trying to take what it has accomplished at the national level and globalise it, inviting the world to participate in drafting a joint climate agenda ahead of the next UN climate gathering in Cancun. In the words of Bolivia’s ambassador to the United Nations, Pablo Solón: “The only thing that can save mankind from a tragedy is the exercise of global democracy.”

If he is right, the Bolivian process might save not just our warming planet, but our failing democracies as well. Not a bad deal at all.

Naomi Klein is the award-winning author of the international bestseller, No Logo: Taking Aim at the Brand Bullies. Translated into 28 languages and with more than a million copies in print, The New York Times called No Logo “a movement bible.” She writes an internationally syndicated column for The Nation magazine and the Guardian newspaper. Her articles have appeared in Harper’s Magazine, The Globe and Mail, and The New York Times. A collection of her work, Fences and Windows: Dispatches from the Front Lines of the Globalization Debate, was published in 2002. In 2004 she wrote and co-produced “The Take,” an award-winning documentary about Argentina’s occupied factory movement. She is a former Miliband Fellow at the London School of Economics and holds an honorary Doctor of Civil Laws from the University of King’s College, Nova Scotia. Her book The Shock Doctrine: The Rise of Disaster Capitalism was published worldwide in 2007.