On the outskirts of Rio de Janeiro lies the world’s largest trash dump, receiving more than 9,000 tonnes of garbage per day. Jardim Gramacho (Gramacho Gardens) is literally overflowing with garbage. Fractures in the dump site’s structure were noticed several years ago, but no decommission strategy has yet been successful because of illegal dumping and other issues.

Research has found that each day, Gramacho emits 800 cubic meters of liquid containing organic and inorganic compounds from domestic refuse, rubble, hospital and industry waste that drains into the Guanabara Bay. This leachate contains high levels of ammonium, nitrogen, chloride, sodium, and potassium and is considered highly toxic.

Despite the horrible environmental conditions, catadores (waste recyclers) have been collecting high-value recyclables found amongst the trash and selling it for profit for the past 30 years. 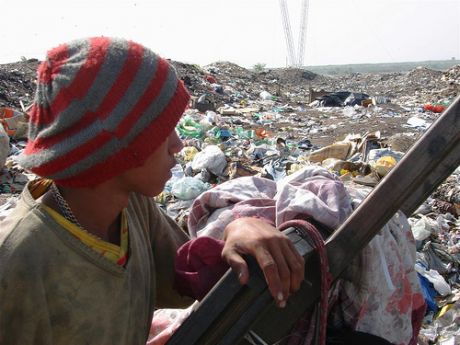 At the end of 2012, this dump and others across Brazil will close due to a law passed by the national parliament in 2010 that eradicates open dumps. But instead of celebrating the end of this environmental disaster, the city is faced with the search for a new home for 70 percent of Rio’s waste, plus all the refuse produced by neighbouring cities, as well as the 15,000 people that earn a living from the income generated by the dump.

Despite the horrible environmental conditions, catadores, or waste recyclers, have been collecting high-value recyclables found amongst the trash and selling it for profit for the past 30 years. When the dump closes, 3,000–4,000 people will be forced off of the landfill grounds and will no longer have the income to support their families that live in the nearby favelas, or slums.

Traditionally, waste recycling cooperatives in Brazil have had little influence upon legislation. However, this new law does give recognition to the work of the catadores and prescribes integrating them into the recycling industry, while also attempting to regulate their working conditions to improve their health and safety.

One example of how the cooperatives in the network cooperate is how, in the case of paper, all the materials are brought to a single cooperative, CRUMA (an acronym for the Portuguese of “Recycling Cooperative United for the Environment”), which sells recycled paper in bulk for a higher price and then distributes the income amongst the contributing cooperatives. Another cooperative, formed of members from a local favela, has raised money to invest in a machine that makes brooms out of recycled plastic soda bottles.

In Arujá, a small city just outside of São Paulo, a cooperative called CORA (Association of Collectors in Arujá and Region) not only collects and sorts 80–100 tonnes of recyclable materials per month, but also supports environmental education within the local community by holding lectures. The cooperative now employs about 20 catadores, operates large collection trucks donated by the city, and will soon be moving to a larger site that is currently being constructed. 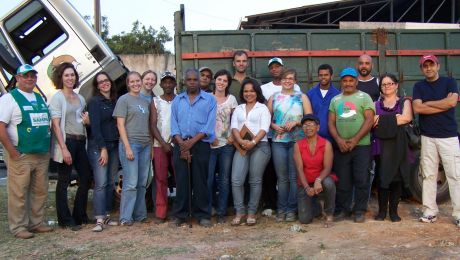 The unique approaches of Brazil’s waste recycling cooperatives are attracting international attention. In May 2011, a group of students from the Massachusetts Institute of Technology (MIT), the University of São Paulo, the Institute of Aeronautical Technology, and the State University of Campinas, worked with one cooperative to install an inexpensive waste vegetable oil filtration system in order to raise the value of the waste vegetable oil they collect. Started at MIT in January of 2010, the Green Grease Project’s aim is to find uses for the waste vegetable oil (WVO) that São Paulo’s catadores collect. The team was formed of MIT students from the Biodiesel Group, who recycle WVO into biodiesel using the processor that the group had installed on campus.

Although the tranesterfication process (which reacts an alcohol, like methanol, in the presence of a catalyst, usually a strong alkaline like sodium hydroxide, with the triglycerides contained in vegetable oil) required to neutralize the free fatty acids in the WVO is relatively straightforward, it requires hazardous chemicals and proper knowledge and training. With this in mind, the group of students, advised by Libby McDonald from MIT’s Community Innovators Lab, elected to focus on a more traditional technology — running a diesel engine on unconverted WVO using only excess heat from the engine.

After a pilot workshop at CRUMA, the group converted two diesel vehicles using recycled and locally-available materials. This technology dates back to the invention of the diesel engine, which Rudolf Diesel, its inventor, intended to run using vegetable oils so that farmers and artisans could utilize a locally-available fuel. The technology today, however, is severely limited by the lack of accessible information and regulations on WVO as a fuel. Although this technique is not as complex as biodiesel production, it does require careful maintenance and properly filtered WVO, both of which require specific infrastructure and communication.

Compared to other recyclable materials, waste vegetable oil poses several challenges, particularly in terms of storage and safety. Unlike paper or plastic that can be easily salvaged from other waste, litres of WVO are often lost down the drain, where they have the potential to pollute water very quickly. According to BioAuto, a waste vegetable oil recycling company in Sao Paulo, one litre of improperly disposed WVO can contaminate up to 23,000 litres of water, so diverting this from the waste stream to more productive uses, such as biodiesel production or direct combustion, reduces water pollution and also has the potential to reduce dependence on fossil fuels.

São Vicente cooperative, located in São Jose dos Campos, collects WVO from other cooperatives in order to have larger quantities to sell to biodiesel manufacturers. The catadores distribute containers to oil suppliers, collect the oil using an efficient suction technique, and then filter it in a sophisticated system with a capacity of 250,000 litres. This system was partly donated by the city authorities, and the rest was purchased using a loan. The cooperative must collect 40,000 litres of WVO per month in order to break even, but are currently only collecting 10,000 litres per month.

Although WVO is still not recognized as a fuel by the Environmental Protection Agency in the United States, these initiatives are influencing others throughout the world.

After seeing this filtration system, the Green Grease Project team decided to develop a smaller, inexpensive system using recycled and locally-available materials. The system they installed at CORA has a capacity of 200 litres, effectively removes 86 percent of the water from the WVO and all particulates larger than 5 microns, and costs only 150 reais, or about US$80 — more than 1,000 times less expensive than the system São Vicente operates. Since its installation in May 2011, the cooperative has been able to double the value of their product.

Although WVO is still not recognized as a fuel by the Environmental Protection Agency in the United States, these initiatives are influencing others throughout the world. The Green Grease Project itself was inspired by a Boston-based company, Green Grease Monkey, that collects WVO and converts diesel vehicles to run on WVO. Another group of students from MIT is now working with a local worker-owned cooperative, Roxbury Green Power, to increase the collection of WVO throughout the Boston area and to optimize the cooperative’s profits by selling the oil to biodiesel manufacturers and “grease car” owners.

The collection of WVO for alternative fuel sources won’t clean up dumps like Jardims Gramacho overnight, but the establishment of systems founded on environmentally and socially sustainable practices can begin to change our concept of waste. If initiatives like the Green Grease Project can take root in Rio de Janeiro, catadores can operate WVO-powered collection trucks and sort recyclables in safe and sanitary working conditions. As the amount of waste we generate only continues to grow as our population does, such initiatives have the power to draw attention to the incalculable value that lies in our landfills.

Angela Hojnacki is a mechanical engineering student at MIT, focusing on energy and environmental issues. Through her involvement with Biodiesel@MIT, a student-run initiative to recycle waste vegetable oil into biodiesel for campus use, she helped form the Green Grease Project with the support of the Community Innovators Lab and the IDEAS Competition. She is currently taking a year off from school to further develop waste-to-energy projects, including waste vegetable oil as a fuel in Boston and Sao Paulo, Brazil, and biodigesters in Nicaragua and India.