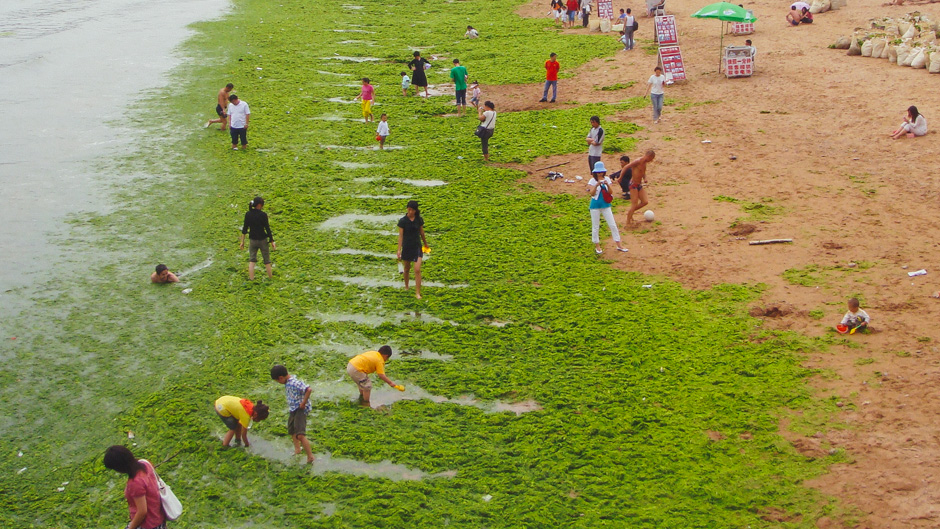 Startling videos began to emerge in early July 2013 of an ocean that had quite literally turned bright green. Green waves, heavy and thick with slimy strands of algae, were breaking against a coastline extending off for miles into the distance. Even the beach was carpeted with it, and China’s coastal city of Qingdao was using bulldozers to remove over 7,000 tons of the stuff.

Algal blooms have become an annual occurrence off the coast of Qingdao over the past six years, but this year’s 28,900+ square kilometer (11,158 square mile) expanse was roughly the size of Belgium, and more than twice as large as the previous record set in 2008.

Such large-scale algal blooms have been linked to massive input of chemical nutrients, often from sewage and agricultural runoff. Explosions of algal growth rapidly alter oxygen levels in the water, causing entire ecosystems to collapse as fish suffocate and stationary organisms like oysters succumb. The resulting dead zones have formed around river deltas and along coastlines in locations around the world.

The sheer size of the oceans led marine biologist Rachel Carson, renowned as a pioneer of the conservation movement, to write in 1951 that man “cannot control or change the ocean as, in his brief tenancy of earth, he has subdued and plundered the continents”.

Fast-forward 60 years and the reality seems quite different, even if one ignores the alarming appearance of ‘green oceans’. Take, for example, a 2012 report from the Food and Agriculture Organization of the United Nations (FAO), according to which 87 percent of global fish stocks were either fully exploited or over-exploited.

Or how about the news that in early 2012, a dead sperm whale washed ashore in Spain; its stomach had ruptured from the 17 kilograms of plastic waste it had swallowed, including flower pots, 30 square meters of greenhouse cover material, and nine metres of plastic rope.

Even at a microscopic scale, humans have succeeded in changing the oceans. Within ocean gyres shaped by currents and winds, enormous so-called garbage patches have formed. This is a bit of a misnomer, however, conjuring up images of piles of garbage, while the reality is a vast soup of billions of particles of plastic, many microscopically small. Concentrations of over 5 kilograms per square kilometer have been recorded in the Pacific, outweighing naturally-occurring plankton six-to-one. Remarkably, these bits of plastic have been found to act as a substrate on which bacteria, algae and other tiny organisms are flourishing, forming microbial reefs. The interactions occurring within these new communities, dubbed the Plastisphere, remain largely unknown, and the long-term effects of plastic entering the ocean’s food chain even less so.

While it seems that we have very successfully changed the ocean, Carson’s point about our inability to control the oceans is as relevant as ever.

Dr. Rachendra Pachauri, Chair of the Intergovernmental Panel on Climate Change (IPCC), recently underscored the vulnerability of cities to rising sea level, explaining that 60 percent of the world’s metropolises with populations of over 5 million people are located within 100 kilometers of the coast.

Considering the fact that many of the most vulnerable metropolises are located within the Asia-Pacific region, the setting for Dr. Pachauri’s presentation — the Fifth International Forum for Sustainable Asia and the Pacific (ISAP2013) — was especially appropriate. An annual event, ISAP2013 was co-organized by the Institute for Global Environmental Strategies (IGES) and the United Nations University Institute for Advanced Studies (UNU-IAS) and took place from 23–24 July 2013 under the theme “Paving the Way for a Sustainable Asia-Pacific: Regional Perspectives on Green Economy”.

A series of presentations by an impressive range of representatives from the private sector, government agencies, UN organizations and NGOs emphasized the urgent need for a green economy, described by the United Nations Environment Programme as one that results in improved human well-being and social equity, while significantly reducing environmental risks and ecological scarcities.

While it is difficult to ignore the negative impacts that business-as-usual promises to deliver to the world’s marine and terrestrial ecosystems, just how do we transition to a green economy?

A recurring theme throughout the presentations at ISAP2013 was the positive role that the government can play. Governments could create greater incentives for business and industry involvement, could become more proactive in establishing positive public-private partnerships, and could take on a leading role in promoting the transition to a green economy.

At the same time, governments around the world seem faced with an almost impossible challenge. After all, transitioning to a green economy is a huge undertaking and governments may always struggle to prioritize the longer-term forward-looking green economy over clear short-term gains, particularly in the face of a series of fiscal crises. And despite the optimism inherent in a green economy, “economy” seems to consistently trump “green” in public opinion polls, with The Guardian citing a study in early 2013 that public concern for the environment was at a 20-year low.

Many governments already seem to be facing increasingly disappointed and apathetic voters — take, for example, the US Congress’s 83 percent disapproval rating, the European Union’s falling favourability rating (45 percent as of 2013), or Japan’s stream of Prime Ministers (seven in the past seven years). In light of these statistics and the precedence that economic concerns take over the environment, it seems a tribute to the Herculean efforts by environmental organizations around the world that such issues are on the political agenda at all.

Reasons for optimism after all

“The sea hath fish for every man,
And what would you have more?” (George Gascoigne, 1573)

The resilience of ecosystems and the strength of local communities to make positive change are causes for optimism. For even in cases where national or global policy discussions collapse into gridlock, dynamic action can build from the bottom up and eventually feed into these discussions with success stories and lessons learned at the local level.

Consider, for example, the apocalyptic and seemingly hopeless image of a river catching fire and burning uncontrolled. In 1969, a fire on Ohio’s heavily polluted Cuyahoga River, which had been described as the river that “oozes rather than flows”, spurred public outcries that eventually led to the passage of a whole range of environmental legislation at the local level, and ultimately contributed to the establishment of the United States Environmental Protection Agency. Recent surveys have now identified 60 fish species in stretches of the river that had previously lost their entire fish populations.

Likewise, building on strong local stakeholder involvement, Japan’s Toyooka City has been working to reintroduce the Oriental White Stork, which had gone extinct in the country in 1971 due to a combination of over-hunting, habitat loss, and overuse of chemical inputs for farming. As presented during ISAP2013, a captive breeding system and innovative branding of rice grown using stork-friendly methods have led to a growing population, with the first chicks hatching in the wild in 2009.

Indeed, the resilience of ecosystems to recover from seemingly catastrophic collapse is impressive. Returning again to the algal blooms and dead zones mentioned earlier, overuse of fertilizers had once created a dead zone in the Black Sea. Due in part to a massive drop in fertilizer use caused by the fall of the Soviet Union in 1991, and concerted international efforts, within a decade the dead zone had largely disappeared. Once an area void of all non-bacterial life, fishing stocks have now rebounded and constitute a major sector of the economy for the area.

The full program and outcome reports of ISAP2013 are available online.

Building a green economy before the oceans turn green(er) by Robert Blasiak is licensed under a Creative Commons Attribution-NonCommercial 3.0 Unported License.