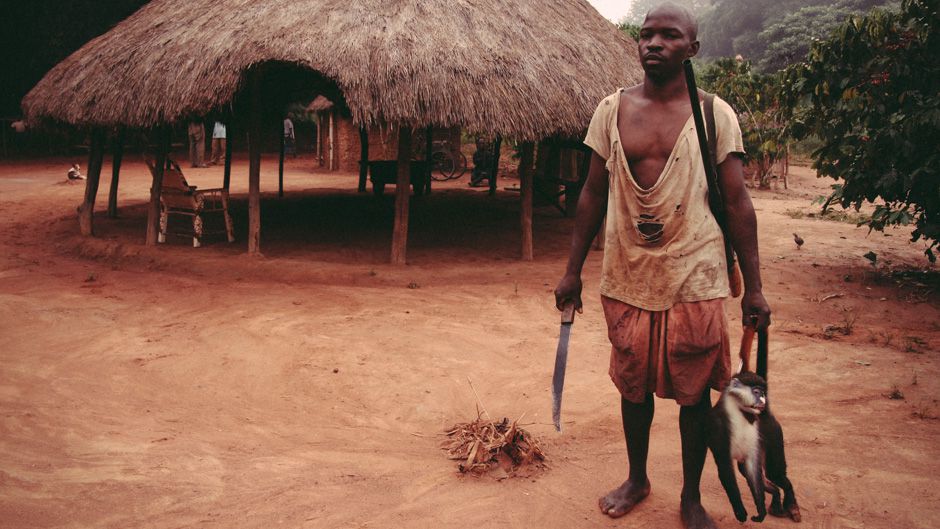 In Africa, the forest is often referred to as ‘the bush’ and the meat derived from wildlife is referred to as ‘bushmeat’. According to an alliance called the Bushmeat Crisis Task Force, commercial, illegal and unsustainable hunting of wild animals for meat is causing widespread local extinctions in Asia and West Africa.

This has reached crisis proportions, the Task Force says, because bushmeat hunting has rapidly expanded to countries and species which were previously not at risk. The expansion is largely due to an increase in commercial logging which brings infrastructure that links forests and hunters to often growing cities and swelling numbers of consumers.

Research by the Center for International Forestry Research (CIFOR) has found that though hunters, traders, scientists and conservationists all view bushmeat differently, they agree on one thing — the animals are indeed disappearing.

The account below outlines the different points of view and the video embedded at the end of the page helps put it all in perspective.

Armed with a long spear, a machete and a wire for setting traps, Tamanga Ekwayoli is chasing wildlife.

Ekwayoli lives in a village bordering the Lac Tumba–Lediima Forest Reserve near Lukolela in the Democratic Republic of Congo. He has been hunting for most of his life.

“I love hunting because I can earn money quickly,” he says. “If God helps me today, I can catch some animals, like monkeys, wild boar or antelopes.”

Ekwayoli uses a twig to pin a lethal loop of wire to the ground, then covers it with leaves. A living sapling bent over by another wire provides the spring that pulls the noose tight.

When he’s hunting, Ekwayoli sets 50 to 100 such traps each day.  “I need to leave them alone for two weeks because it takes some time for my human odour to leave the trap,” he says. 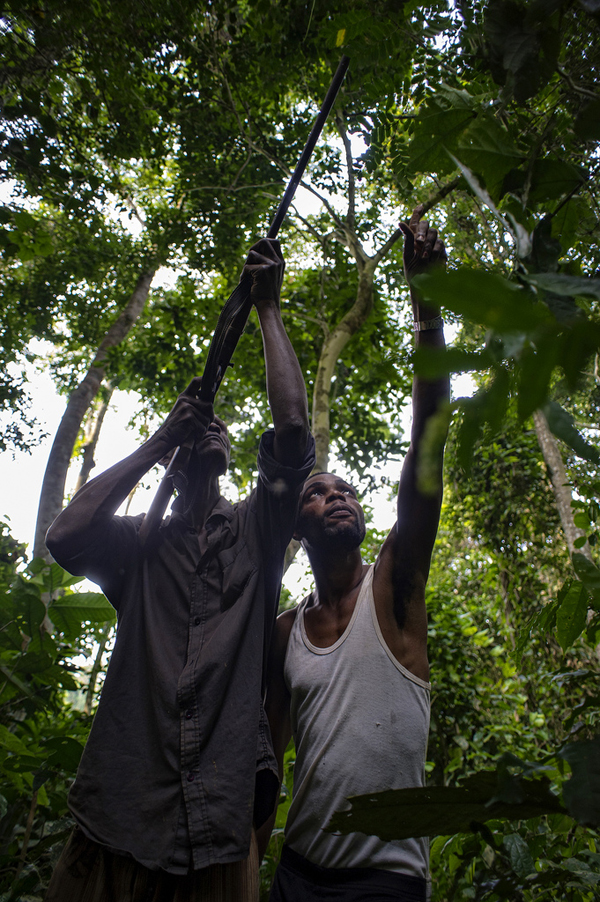 Pangolin populations are declining as they are subject to widespread and often intensive exploitation for bushmeat and traditional medicine, according to the IUCN Red List of Threatened Species. Photo by John Friel

Hunters, Zorro Ndeli and Tamanga Ekwayoli in the Tumba–Ledima Reserve, Democratic Republic of Congo. Photo by Ollivier Girard for CIFOR.

When he returns two weeks later, he says, on average he will find half a dozen small antelopes and a couple of porcupines or wild boar.

But too often, he says, he doesn’t have any surplus.

“When I started hunting, there were a lot of animals.”

“I used to catch more monkeys, wild boar, porcupine, chimpanzee and antelopes to sell in the village. These are the types of animals villagers prefer.”

“But they are becoming harder and harder to find.”

“Every Tuesday or Wednesday we take our canoe and spend two days travelling to Manga,” she says, jamming her knife into an antelope’s hairy thigh. “We buy bush meat and bring it here.”

“We source our animals from hunters who have been in the forest. In these forests, there are crocodiles, monkeys, antelopes, squirrels, porcupines — and sometimes, we get elephants.”

Some animals are reserved for men only, according to tradition. But everyone has a favourite.

This might just be marketing — as she talks, Mwakembe prepares chunks of crocodile for customers, wrapping them in fresh green banana leaves.

“In our village, a lot of people eat bush meat,” she says.

But the prized animals are getting rarer.

“With just two animals, one can make a lot of money,” Mwakembe says.

“But now, sometimes I travel for two days, leaving my husband and children at home, and I still come back empty handed.”

“We are very worried.”

Jean Mapima is the Chief Administrator of the Lac Tumba–Lediima Forest Reserve, a new protected area created in 2006.

Mapima says there’s been an increase in the amount of hunting in and around the reserve.

“Traditionally, hunting was done mainly for subsistence, for family consumption. However, people are increasingly engaging in commercial hunting, which is progressing fast — we see this as something very, very dangerous,” he said. 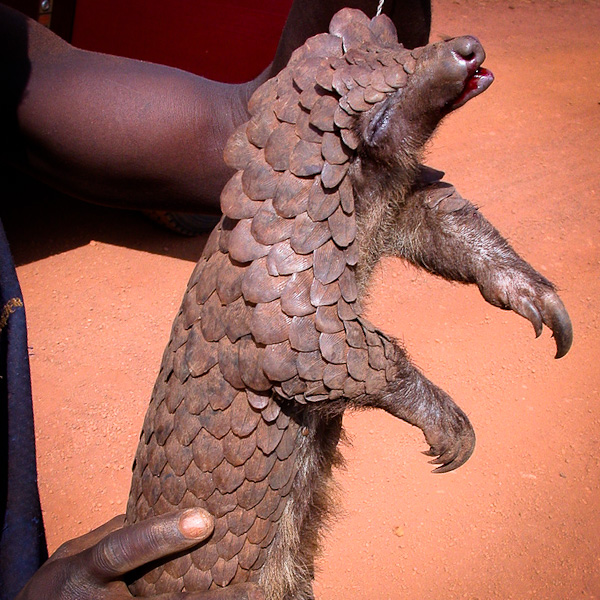 Pangolin populations are declining as they are subject to widespread and often intensive exploitation for bushmeat and traditional medicine, according to the IUCN Red List of Threatened Species. Photo by John Friel.

“Commercial hunting’s origin can be traced to poverty, to lack of other means of livelihood for the population. That’s why the people are hunting, to buy medication for the children, to buy clothing.”

“But with that, we stand the risk of the extinction of some species.”

Mapima has confiscated an arsenal of spears, guns and traps. He says Congo’s ongoing conflicts have had an impact on the kinds of arms used.

“There is an increase in sophisticated hunting firearms. There is also the sale and trafficking of bullets for these firearms.”

“We have even seized some weapons of war from people hunting in the reserve,” he said.

But Mapima’s tough stance hasn’t endeared his team to the surrounding population. The forest guards face the threat of violence from villagers angry about the restrictions, and access to food has become a problem.

“The people in the village have refused to sell fish to us. They say that since we stop them from hunting and having meat, they will retaliate by not selling fish to us,” Mapima said.

In practice this means Mapima is vegetarian. Bushmeat is the only available meat and he refuses to eat it.

“Within my conscience, it’s painful for me to eat meat while I am stopping people from hunting. It is not honourable for me to eat it,” he says.

“The animals have become like my children, my friends, and so it’s very difficult for me to eat meat.”

Robert Nasi, a scientist with the Centre for International Forestry Research (CIFOR), says bushmeat hunting in the DRC and across the Congo Basin is becoming increasingly unsustainable.

“The main trends have been an increase in the amount of animals caught, mainly linked to the increase in population in the region,” he said. “There is clearly an overharvesting in some places, so we can say that it is unsustainable, yes.”

This has consequences for both people and the environment, he says.

“If the resource disappears, people will not be able to hunt and there will be a food shortage, there will be a protein gap somewhere. And secondly, many of the animals that are hunted have a significant role in seed dispersal, seed removal or seed predation, so that that may trigger some change in the long term in the type of forest.”

But, Nasi says, CIFOR research has shown that an outright ban on hunting isn’t the solution – because rural people have very few alternative ways to get essential protein, and will continue to hunt illegally.

“In rural areas in the Congo basin people rely up to 60 or 80 percent on bushmeat for their protein intake. And the rest comes from fish, from grubs, caterpillars, you name it — there are no livestock.”

“If there is no alternative, this sort of blanket regulation doesn’t work.”

In fact, Nasi says, replacing the 6 million tonnes of bushmeat consumed each year in the Congo Basin with beef, for example, would have environmentally catastrophic consequences.

“Six million tonnes is about the beef production of Brazil, which people estimate has been responsible for 60 to 70 percent of the deforestation in the Amazon basin,” he said.

“So we are talking about 20 or 25 million hectares of forest wiped out to put cattle — because cattle cannot live in the forest, they need pasture.”

Nasi suggests one solution would be to ban hunting of vulnerable species — the gorillas and elephants — while allowing people to hunt more resilient species, like duikers (small antelopes) and porcupines.

“A significant amount of the animals harvested by the people are rodents, something like 60 or 70 percent of the catch. And many of these rodents, they are like rats. They reproduce pretty fast, they are resilient to hunting.”

In addition, he says, consumption needs to be addressed, especially in urban areas, where people have access to domestic sources of meat.

“As long as there is someone willing to buy, people will hunt, that’s what you see with any illegal trade.”

Bushmeat stories: Voices from the Congo Basin by Kate Evans is licensed under a Creative Commons Attribution-NoDerivs 3.0 Unported License.

Kate Evans is a Kiwi/Australian freelance journalist. After studying journalism at the University of Sydney and international relations at the Australian National University, she worked as a multi journalist at the Australian Broadcasting Corporation for three years…and then ran off to West Africa armed with a video camera and a love of African dance. She is now an independent video journalist focussing on environmental issues – and a communications consultant with CIFOR.

Hunting for a Solution