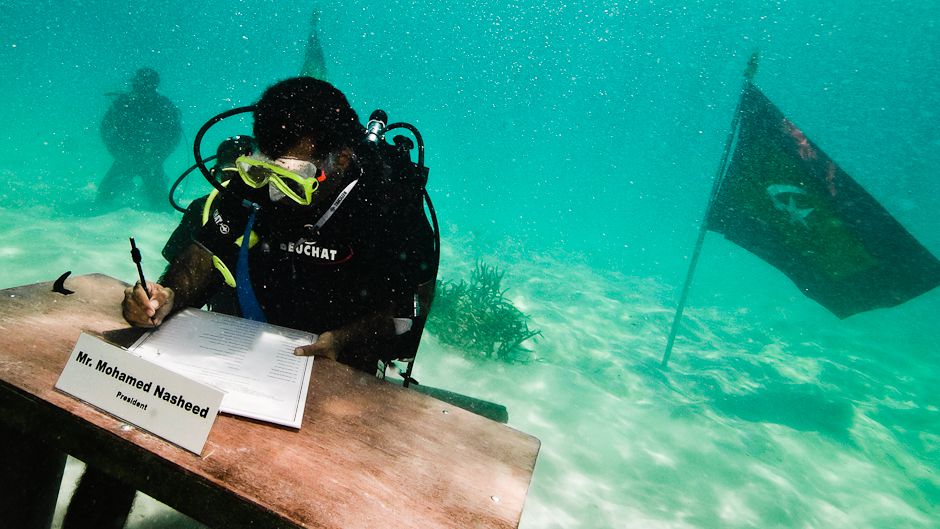 The Copenhagen Accord and outcomes from last winter’s Cancun climate summit envision halting global warming through climate change at a 2°C temperature rise by the end of this century. In order to do that our carbon space, the amount of anthropogenic CO2 that we can emit from now to 2050, is limited. And our current emissions are too high to achieve that goal — hence the need for a dramatic reduction.

In 2009, the world emitted about 9.5 giga tons of carbon (GtC) from fossil fuel and land use changes (equivalent of 34.8 Gt CO2). To reach the 2°C goal, our average annual allowable carbon per year for 2010-2050 is 7.6 GtC. And then still, the probability of exceeding the target is about 50%, as the figure below illustrates. To increase this probability to 75%, annual emissions would have to decrease to 4.6GtC, less than half the annual level emitted in 2009. As the Intergovernmental Panel on Climate Change (IPCC) has shown, planetary CO2 emissions should peak soon and start declining rapidly in order to achieve the global 2°C policy target.

Asia is a key region in this regard. The continent accounts for a large and growing share of the word’s carbon emissions of currently about 41%. Per capita emissions in Asia however, are generally still relatively low (excluding a few exceptions such as Japan and South Korea). For example, India has around 17.5% of the world’s population but emits only around 6% of the total fossil CO2 emissions. But recently, China overtook the United States as largest emitter in absolute terms (China accounts for 19.7% of world population and 24% of world fossil CO2 emissions).

With growing populations and economic development in Asia, per capita and absolute emissions are set to rise. In particular, emissions will tend to increase rapidly in the coming years in the urban areas of Asia, which will contribute to the acceleration of climatic changes and can potentially lead to irreversible consequences. Hence the opportunities as well as challenges for carbon governance in Asia are immense.

However, within Asia, huge differences in welfare, governance systems, and carbon emission trajectories exist, both within as well as between states. For example, governance systems range from less democratic regimes and closed economies in North Korea and Myanmar, to more liberal democracies like Australia and Japan. Welfare varies from agriculture dependent Bhutan to rapidly developing countries like Vietnam and leading industrial countries like Japan. These differences influence agenda-setting and resource allocations by decision makers who have to manage overlapping as well as conflicting environmental and non-environmental policy domains like development policies.

Asia still has immense development challenges, even though the continent has advanced in poverty reduction in the last years. According to the data of the Asian Development Bank, China managed to reduce the proportion of population below the poverty line from over 60 per cent in 1990 to around 15 percent in 2005. Also, progress has been made for example in Bangladesh (from about 67 per cent in 1992 to just below 50 per cent in 2005), but still, about half of its population lives below the poverty line. Large scale global environmental alterations, like climate change, can limit the positive impact of those achievements, as the continent is subject to a great number of threats, such as those posed by sea level rise and increases in climate-related disasters (e.g., floods, droughts and typhoons).

[quote quote=”With growing populations and economic development in Asia, per capita and absolute emissions are set to rise, contributing to the acceleration of climatic changes and potentially irreversible consequences.” type=”text” ]

It is thus in the region’s own interest to manage carbon effectively and govern the necessary economic, societal and environmental transition in a timely, equitable, and effective manner. This poses a huge challenge but also presents opportunities to research and policy communities.

The regional differences are also the result of different pathways of regional and local development. Pathways are sequences of interrelated changes in social, economic and governance systems. They vary from place to place and over time, in ways that are likely to have different net consequences for carbon stocks and fluxes. In turn they may constrain or in other ways feedback upon development processes.

Thus, the climate problem is not just a cumulative and systemic problem at the global level but has different features and causes, and impacts at different levels of governance. New forms of governance at all levels, from the local, the national, and the regional level, in coordination with efforts on the global level are urgently needed. Not only to mitigate climate change but also to adapt to those changes in natural systems already occurring such as sea level rise, biodiversity loss, extreme weather events that can no longer be halted even when the global 2°C policy target will be reached.

The mutual interdependencies and feedbacks in the carbon cycle, as well as in the management of carbon, places demands on the science community to establish a common, mutually agreed upon knowledge base to support policy debate and action, and to develop integrated systems of governance toward sustainability, from the local to the global level — and on the regional level. A better understanding of the carbon governance challenges across multiple scales is necessary for Asia, which is less understood as of now. Such understanding will provide important insights to design an optimized overall carbon governance structure. Future research in the region on this needs to be integrative and should take into account the interlinkages between carbon governance and other fields of governance, be it other environmental governance challenges like biodiversity loss or ocean acidification, or non-environmental policy areas like social policies and economic policies.

In November 2010, leading scientists, policy-makers, and early career researchers from 10 countries in the Asia Pacific region met in Yokohama, Japan to discuss the challenges and opportunities for carbon governance in Asia. The workshop, which was held immediately prior to and in the same venue of the meeting of the Asia Pacific Economic Cooperation (APEC), alerted APEC about the risks of the lack of climate governance in the continent, and urged APEC leaders to use the APEC meeting as an opportunity to coordinate action to tackle climate change in the region.

However, climate change was not a major issue in the APEC discussions, which focused on trade and economic crisis and recovery — important as well — and on the long-term they are intrinsically linked with and dependent upon climate change and carbon governance. Although climate governance is recognized in many places, in fora like APEC it has not yet been addressed seriously, beyond non-binding statements.

[quote quote=”A more bottom-up approach to govern carbon emissions at regional, national, sub-national and sectoral levels will be fundamental to avoid the least desirable climate outcome with unprecedented impacts, particularly on the poor and most vulnerable.” type=”text” ]

An important message from the workshop scientists is that pathways of regional development need recognition and emphasis when developing efficient and fair carbon governance. In other words, climate change is linked directly to development goals in Asia. But its lack of prioritization at the highest level of policy debates, such as APEC, makes the consolidation of regional carbon governance regimes in Asia and the Pacific difficult, despite their key role in ensuring carbon emissions targets are reached.

Carbon governance is a multilevel governance challenge that includes actors and agents at all levels: local, national and regional. These actors are increasingly non-state actors like environmental advocacy groups, businesses, and scientific networks. This multilevel characteristic requires a better scientific understanding and political awareness of norms, like that of a common but differentiated responsibility or the precautionary principle, or more technical standards on carbon trading and emission allocation in carbon governance. Norms that are compatible between levels and policy domains should in parallel reflect that carbon governance is embedded in different cultural, social, economical, and political contexts. This understanding is fundamental to activating political interest and action at the various levels, particularly at the highest policy level in Asia.

The outcomes from Cancun do not point to a clear agreement post-Kyoto. It is likely that voluntary commitments and decentralized carbon regimes, possibly without a global carbon cap, will be the path of carbon governance in the future. Thus, a more bottom-up approach to govern carbon emissions at regional, national, sub-national and sectoral levels will be fundamental to avoid the least desirable climate outcome with unprecedented impacts, particularly on the poor and most vulnerable.

New forms of governance, such as those emerging in forests — linked to Reducing Emissions from Deforestation and Degradation (REDD+) — need to emerge quickly to frame a minimum governance structure to manage carbon emissions. Asia is at the forefront of generating emissions and thus needs to also be in the forefront of solutions, creating unique governance regimes that take into consideration the region’s social, cultural and economic conditions.

The Carbon Governance in Asia capacity building workshop was organized by the Global Carbon Project, the Earth System Governance Project, and the United Nations University Institute for Advanced Studies, with the support of the Asia Pacific Network on Global Change Research. This article reflects solely the views of the authors and not their institutions.

Ruben Zondervan is the Executive Director of the Earth System Governance Project. The Project is the largest social science research network in the area of governance and global environmental change that takes up the challenge of exploring political solutions and novel, more effective governance systems to cope with the current environmental change. Zondervan is based at the International Project Office hosted by Lund University, Sweden. He is a political scientist with a focus on environment and resource management and has worked in diplomacy and industry before joining the project. His current interests include amongst others the governance of geo-engineering.

Shobhakar Dhakal is one of the two Executive Directors of the Global Carbon Project, an international scientific program dedicated to global carbon cycle and carbon management based at the National Institute for Environmental Studies, Japan. He is an expert on urban and global carbon analyses. He is one of the Coordinating Lead Authors of the Working Group III report of IPCC’s Fifth Assessment Report and Lead Author of several other international assessments such as Global Energy Assessment and Assessment Report on Cities and Climate Change. He is a senior editor of Carbon Management, an international journal and has authored several contributions in scholarly journals, books and others.