Chasing Bullets in the Democratic Republic of Congo 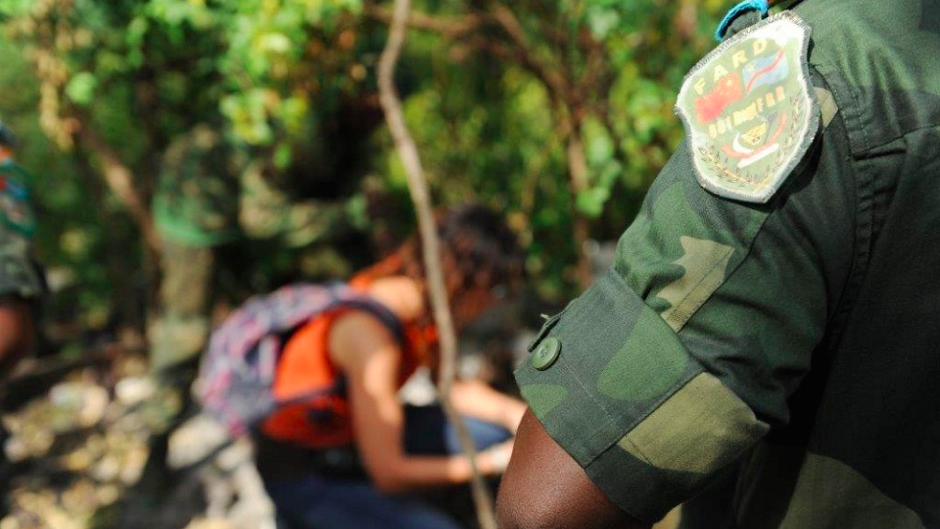 An investigator with the NGO Conflict Armaments Research sifts through bullets left behind at an armed group’s base after the DRC national army over ran the position in the Virunga National Park. Photo: © Guy Oliver/IRIN.

Her job is to track and trace small arms and ammunition in Africa’s conflict zones.

Each bullet, assault rifle, mortar, rocket or other item of military hardware she documents forms a piece of a huge jigsaw being created by the United Kingdom-based nongovernmental organization Conflict Armaments Research (CAR) to map the precise flows of conflict weaponry in Africa.

Moving within the ebb and flow of the Democratic Republic of Congo’s (DRC) conflict, the investigator, who asked not to be identified, tells IRIN: “Ideally, it’s best to be following up the fight, so you can get there as soon as it is over [to verify the types and origin of ammunition and small arms].”

The UN Stabilization Mission in the DRC’s (MONUSCO) Force Intervention Brigade (FIB) has been handed a “robust” UN Security Council mandate to neutralize the country’s armed groups, in partnership with the DRC’s national army (FARDC), and operations are in progress against a variety of militias.

The Forces Démocratiques pour la Libération du Rwanda (FDLR, Rwandan Hutu rebel group) position in the Virunga National Park was recently overrun by FARDC and Malawian FIB elements. Two FDLR fighters were killed, FARDC told IRIN, and the remainder, about 20 or so, were thought to have scattered into the bush.

Documenting a find as quickly as possible in situ is imperative. After military positions are captured, any weaponry and ammunition is often distributed among the victors and a link lost in piecing together the supply chain.

Juggling two cell phones, the investigator makes a flurry of calls and is granted permission by some of the FARDC military hierarchy — and denied it by others — to visit the captured FDLR bush camp, known as Kilometre Nine.

“It’s best to just go there and speak with them [FARDC],” she says. “We need to get there before the [FDLR] ammunition is taken by the FARDC.”

Documenting the find as quickly as possible in situ is imperative. Armed groups and national armies, more often than not, share the same firearms. After military positions are captured, any weaponry and ammunition is often distributed among the victors and a link lost in piecing together the supply chain.

From the volcanic rock road there are no signs of the militia base that provided FDLR an income from the US$0.21 toll for travellers bisecting the park from Kalangera and Tongo in Rutshuru Territory, North Kivu Province.

In search of “head stamps”

However, a few metres into the dense brush, an area opens up revealing the detritus of living: Bush meat hangs from trees, the smell of poor sanitation pervades; there is a bed made from branches, with straw as a mattress, and a poncho strung above it as a barrier to the rain — and an ammunition box.

Taking each round, she begins photographing the “head stamp” on the base of the cartridges. To the untrained eye the ammunition markings may appear meaningless. For the investigator, it reveals a telling story.

A cartridge head stamp is impressed at the point of manufacture and “more often than not there is the country of origin and date of manufacture,” James Bevan, director of CAR, tells IRIN.

“For example, the Bulgarian identity number is 10. Uganda’s Luwero Industries use Chinese manufacturing equipment, so have the same font. LI at the 12 o’clock position and the two digit year at the 6 o’clock position,” he said.

“There is Sudanese ammunition in the DRC. The Khartoum government supplied a fair bit of it” The identity for Zimbabwean munitions is ZI, while some in Sudan carry an SU or SUD moniker.

There are other tell-tale signs on the head stamp that may help confirm origin — but are not sufficient on their own to determine it — such as the colouring of the primer annulus lacquer, or the “primer stakes” configuration — small indents around the primer (the ignition point at the base of the cartridge). 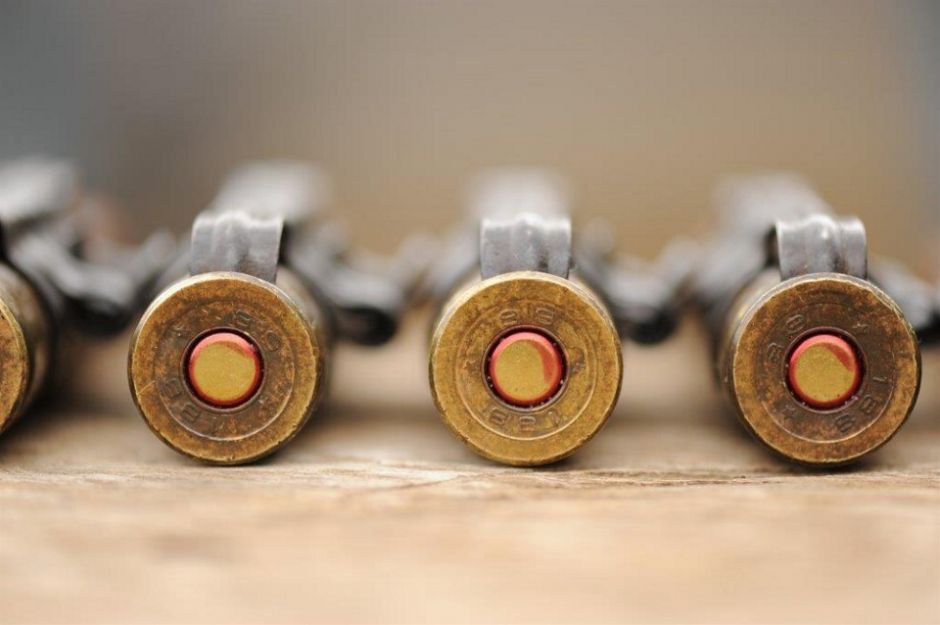 2.7 x 108 mm cartridges in use by the DRC national army (FARDC). The head stamp shows the ammunition was manufactured in Novosibirsk, Russia. One of the bullets was produced in 2008 and the other two in 1988. Photo: © Guy Oliver/IRIN.

“There is Sudanese ammunition in the DRC. The Khartoum government supplied a fair bit of it. M23 [an alleged proxy force of neighbouring Rwanda] also had a lot of it. We are trying to resolve how it got there. It’s also not great quality,” Bevan said.

CAR, established in 2011, is monitoring arms flows in Mali, Somalia, Sudan and South Sudan, and recently begun doing the same in the Central African Republic.

“[From initial research] it appears Sudan is supplying state and non-state forces across the region, from east to west Africa,” Bevan said.

The report on arms flows from Sudan is expected for release in June 2014. The NGO will also launch an open-source database at the UN in New York the same month, called iTrace. It is envisaged the publicly available information will be used by national arms export control authorities, NGOs and investigative journalists, among others.

A report published by the Small Arms Survey in May 2014, “Following the Thread: Arms and Ammunition Tracing in Sudan and South Sudan” found during the research period between April 2011 and July 2013 that “Sudanese security forces are the primary source of weapons to non-state armed groups in Sudan and South Sudan, through deliberate arming and battlefield capture.”

The UN General Assembly on 2 April 2013 adopted the Arms Trade Treaty (ATT) to regulate the estimated US$70 billion annual trade in conventional weapons. Iran, Syria and North Korea voted against the treaty. By the first anniversary of the adoption of the treaty, 118 states had signed and 31 had ratified it. The ATT enters into force after ratification by 50 states.

CAR is documenting both militias and government forces’ armouries, as “the illicit and legal trade [in weapons and munitions] is linked. The primary legal conduits feed into [the] illicit market,” Bevan said. 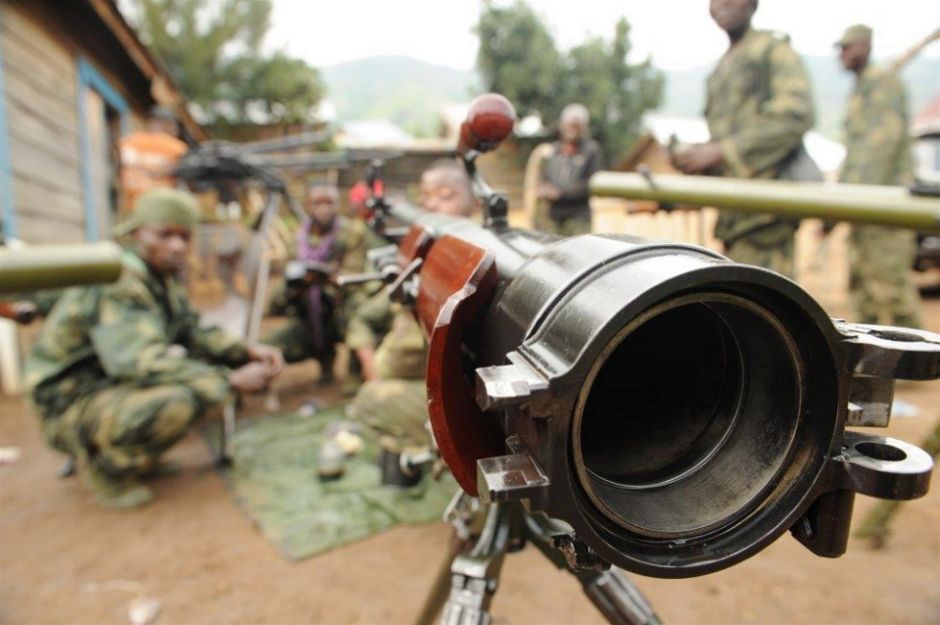 A recoilless rifle in use with the FARDC and captured from the DRC armed group M23 during operations in 2013. The weapon is now being deployed for use against the FDLR in Tongo, Rutshuru Territory, North Kivu province. Photo: © Guy Oliver/IRIN.

Pytlak said controls over ammunition in the ATT were opposed by many states “and it is now only included when it is an export — on the grounds that it is too difficult to implement and manage… The overwhelming majority of states that export military equipment already have controls for ammunition through their arms export control systems.”

CAC is planning to establish a civil society watchdog publication to monitor the ATT’s implementation, similar to the Landmine and Cluster Munition Monitor, which provides oversight for the Mine Ban Treaty.

“African arms markets are evolving, with new suppliers and new supply vectors — both legal and illicit… However, the international community is currently hampered in its responses to illicit weapons’ proliferation, primarily because it lacks the monitoring capacity to understand illicit transfers fully,” says a report by CAR published in 2012 following a nine-country investigation.

In Tongo, FARDC soldiers were cleaning their weapons ahead of a planned offensive against FDLR. Among the array of weaponry was a recoilless rifle, captured from an M23 position during fighting last year.

A FARDC unit had commandeered the weapon, something that illustrates how materiel can be quickly lost as weapons change hands within such fluid environments. Documenting the weapon provides another point to determine at a future time — how the weapon may have moved through a maze of military actors, both government and militia.

CAR published a report in 2012 following a nine-country investigation, entitled “The Distribution of Iranian Ammunition in Africa“, and found “African governments appear to be the main vectors in the supply of Iranian ammunition [and weapons] to illicit markets in Africa — whether as a result of loss, theft or deliberate policies of arming civilians and insurgent forces.”

In one incident “there is clear evidence of direct, illicit supply by Iran to the continent”, in violation of the 2007 UN sanctions on export of Iranian weapons. “Transfers of Iranian ammunition also contravened UN sanctions on Cote d’Ivoire and plausibly violated UN embargoes on the DRC and Darfur. There is no evidence to suggest the direct involvement of Iran in these violations,” the report said.

The report notes that “African arms markets are evolving, with new suppliers and new supply vectors — both legal and illicit. However, the international community is currently hampered in its responses to illicit weapons’ proliferation, primarily because it lacks the monitoring capacity to understand illicit transfers fully, and on this basis, to develop appropriate counter-proliferation strategies.”

Bevan said the ATT “is strong on export controls, but there is currently no independent monitoring component to it. That is what we [CAR] are doing.”