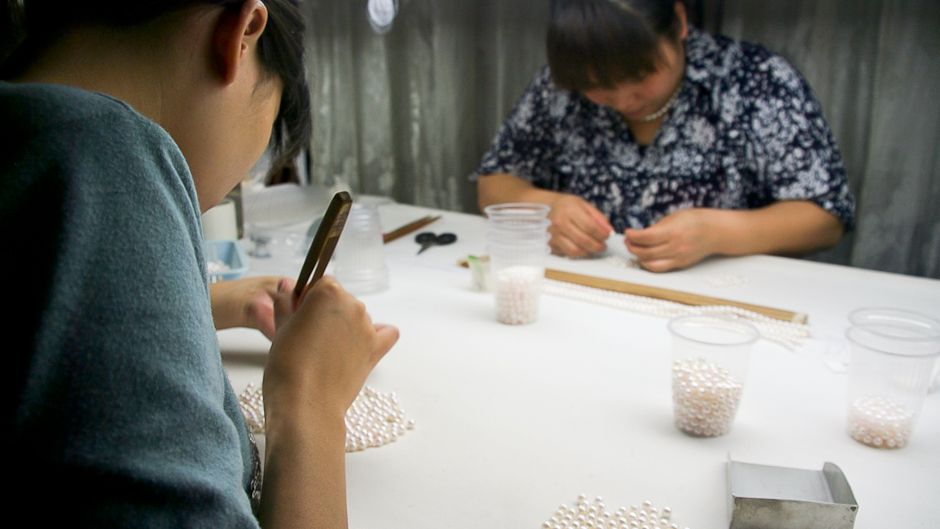 China is the largest producer of cultured pearls in the world. But pearl farmers are now raising questions about their future as they are facing increasing ecological problems and are being excluded from industrialization strategies.

The country has a long and rich history in pearls coming from saltwater oysters and freshwater mussels. The region of Hepu and Behai had active marine pearl fisheries as early as the Han dynasty (3rd century AD). Reports of pearl finds in rivers and lakes date back to the 4th millennium BC.

Marine pearl oysters are cultivated in the coastal waters of Guangxi and Guangdong whereas freshwater pearl mussels are farmed in rivers, ponds and lakes in Zhejiang, Jiangsu, Hunan and Anhui provinces. Juvenile oysters and mussels for culture are obtained through hatcheries, reducing the impact on natural populations. Whereas marine oysters can produce one or two cultured pearls at a time, freshwater mussels can produce 30–50 cultured pearls. This also explains why freshwater cultured pearls are so much cheaper.

Although very much different in their ecologies and production practices, the waters of these molluscs share common threats and opportunities. As the production of pearls continues to rise and intensify, and rapid economic development increasingly reaches these pearl producing regions, problems — largely of an environmental nature — loom.

The vast majority of freshwater mussels are cultivated in old rice paddies that have been excavated and flooded to become artificial lakes (usually 2–3 metres deep) for cultivation. Mussels remain five years in these ponds before they are harvested for their pearls. 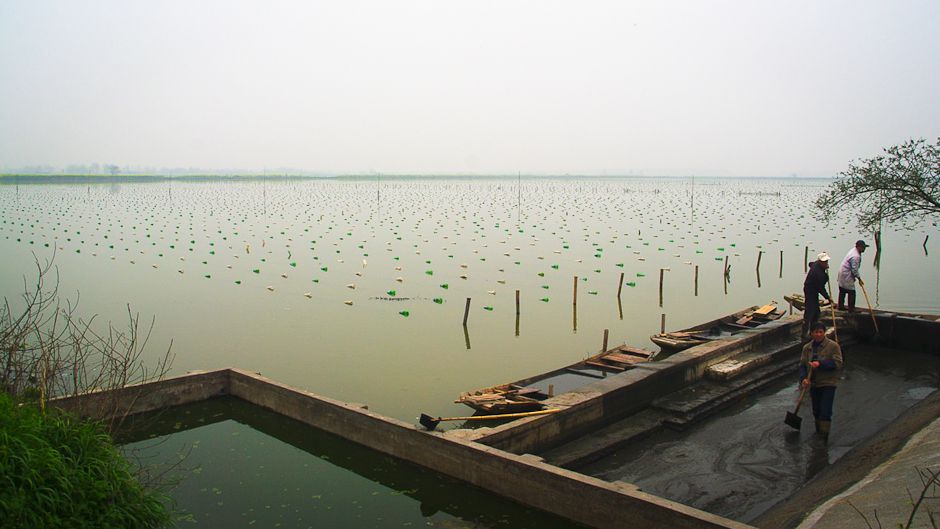 These ponds are enriched with manure or animal waste to produce as much algae (the phytoplankton food source of mussels) as possible. Filter-feeding carp are added to the ponds, to improve food quality for the mussels. In their symbiotic relationship with the freshwater mussels, the carp filter phytoplankton and prevent potential euthrophication and algal blooms.

However, these steps can lead to nutrient impoverishment of soils and waters. In one case in 2007, pearl mussel farming was temporarily banned in Hubei province because of concerns with the levels of manure and fertilizer used in pearl production.

In Zhuji, the birthplace of freshwater pearl mussel cultivation, many farmers have either ceased pearl production or shifted production to less polluted waters in central China.

On the one hand, freshwater pearl farming requires clean water and is affected by pollution from surrounding activities (e.g., farming, construction, wastewater). On the other hand, it too, if not responsibly managed, can engender ecological problems. As one pearl farmer puts it, “we need to keep a Confucian balance with nature — that is the traditional Chinese way”.

In Zhuji (250 km from Shanghai), the birthplace of modern freshwater pearl mussel cultivation, many pearl farmers have either ceased pearl production (for more lucrative alternatives) or shifted production to less densely populated and less polluted waters in central China (e.g., Hunan province). In light of the rapid development of the Zhuji region, government has even begun paying pearl farmers to relocate. Zhuji remains an important pearl centre, as many actors have climbed up the value chain to become traders, wholesalers and jewellery manufacturers.

Marine pearl oysters are much more sensitive than their freshwater cousins and the farmers cultivating them are much more aware of issues such as carrying capacity and the influence of external pollution on oysters. A collapse of the ecosystem would also mean the collapse of their livelihoods. And in great contrast to other industries, this becomes immediately apparent because oysters are quick to react. Even slight ecological modifications can have important adverse effects on the oyster’s ability to function and secrete mother-of-pearl.

Coastal regions of China have experienced intense economic development, construction and industrialization, and it is here that pearl farms are slowly being forced out. In many cases, local governments’ priorities are large-scale commercial developments.

“There is not enough space and natural capital to support a thriving pearl sector and lots of industry in coastal China,” says a pearl farmer in Guangdong province. This does not bode well for the future of Chinese pearls. Marine pearl oysters are more prone to environmental change than freshwater mussels. Marine pearl farmers are already beginning to migrate to cleaner waters in Vietnam, Philippines or Indonesia because of too much pollution in China.

The recent global economic crisis had a large effect on the Chinese pearl industry. The overproduction of low-quality freshwater cultured pearls coupled with low demand and spiralling prices for these pearls, has meant that many pearl farmers could no longer cover their production costs. A number of farmers decided to quit the activity choosing to move into more lucrative economic activities (e.g., manufacturing, property development, fish aquaculture).

The pearl sector is not only a microcosm of China’s socio-economic rise but is emblematic of the many environmental issues surrounding development.

Consolidation of the industry is underway and with it comes the question of how pearl qualities can be improved. The quality of a pearl is defined by the techniques of the farmer and environmental parameters of the host waters.

Fundamentally, pearl farmers can improve both pearl quality and profits through cleaner production. Whereas a farmer can choose to adopt sound environmental practices, he is not the master of his destiny in terms of controlling external pollution. 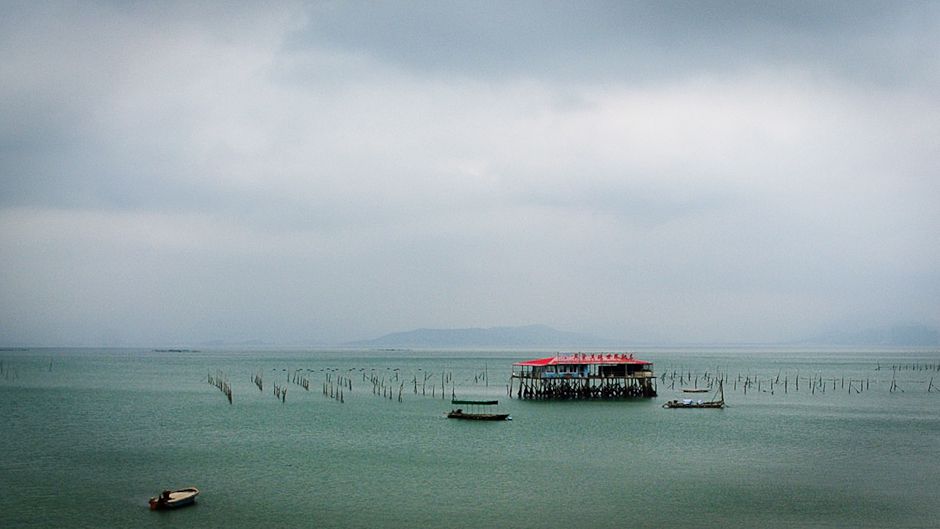 Presently, pollution and competition for water resources present more risk for a pearl farmer than the longer-term effects of climate change and ocean acidification. Arguably, local problems can be better quantified and regulated than globally influenced environmental ones. Ultimately, these external sources of pollution can only be regulated and managed at a regional level but this challenges authorities to take these issues more seriously. China has many laws on the books but enforcement in remote areas is difficult and local officials remain beholden to industrial patronage.

A recent article put forward that “China’s pearl industry is a microcosm of how the country is moving beyond low-wage jobs and imitating foreign producers”. However, the pressures of rapid industrialization are evident in pearl farming areas of Hunan, Guangxi or Guangzhou. Unconstrained growth and associated consequences might well impede improvements in pearling practices, pearl profits and ultimately the future of the Chinese pearl industry.

Pearl farming is characterised by two trends, which are also central to the development trajectory of modern China. Firstly, that quality and profits (of pearls) can only rise through cleaner production and innovation. Secondly, that short-term pollution is bound to have serious long-term consequences. Because pearl molluscs are good environmental indicators, these dynamics become much more visible and evident today. The sector is not only a microcosm of China’s socio-economic rise but also emblematic of many environmental issues surrounding coastal and inland development.

The country is set to become the largest jewellery market in the world by 2015. The hope is not only that its millennial pearling tradition can continue to innovate and prosper, but also that its pearls can provide an impetus for raising environmental awareness in China. 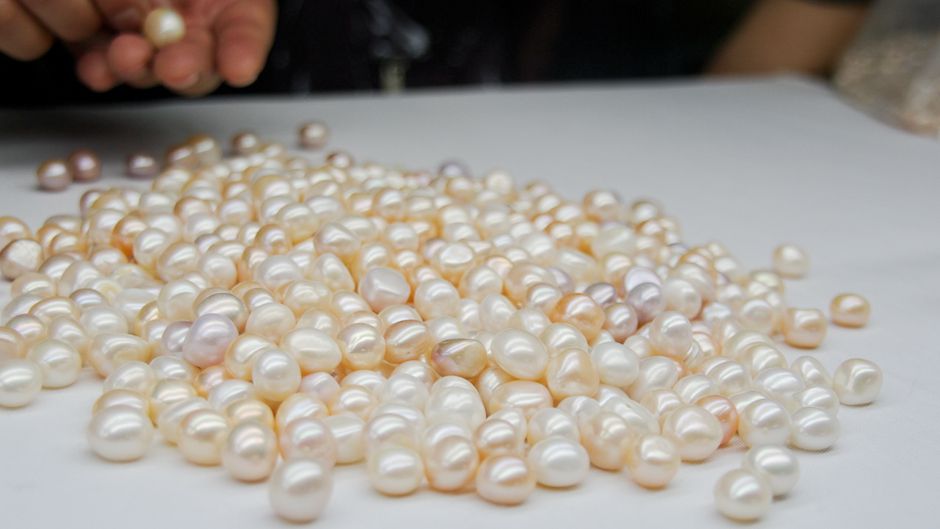 Acknowledgments: Laurent Cartier is grateful to the Gemmological Association of Hong Kong and Arthur and David Wong for help with visiting pearl farms in China.

For more information about pearls and sustainability, and to contact the authors, visit sustainablepearls.org.