Cities Rally Around the Paris Deal, a Reminder that Global Problems Can Have Local Solutions 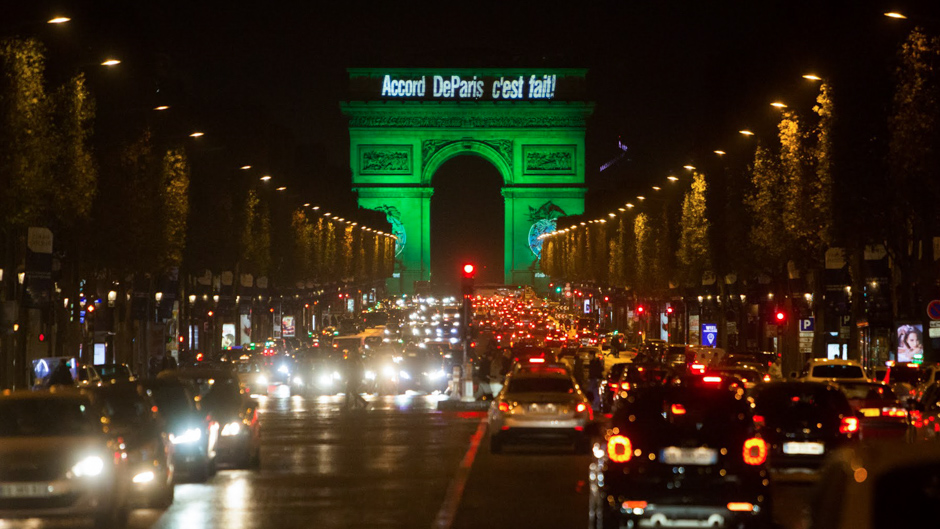 When President Donald Trump withdrew the United States from the Paris agreement, the landmark climate accord signed by 196 nations that came into force in November 2016, the decision caused a significant negative backlash among other signatory countries.

Given that the US is one of the world’s largest greenhouse gas emitters, its June 1 reneging on the deal delivered a blow to the global agreement. But, as many commentators were quick to point out, as long as other leaders didn’t follow Trump’s lead, it was largely a symbolic one.

So far, the international response has confirmed this: a chain reaction of support for climate change mitigation, from grassroots up to the highest ranks of government.

China has reiterated its support for the Paris agreement, and India, the world’s fourth-largest greenhouse gas emitter, seems likely to continue the renewable energy revolution already underway there.

Europe, led by Germany and France, is also stepping into the fray.

In the same speech, Macron also proposed a follow up to the Paris agreement: a global pact on environmental justice, under which states could be held accountable for flouting the rights of a group or individual.

Trump’s environmentalism has also incentivised US stakeholders to play a more central role in holding up the American end of the Paris agreement, which then US secretary of state John Kerry signed in April 2016 with his granddaughter on his lap.

US cities, companies, universities and states are now taking the initiative to cooperate directly with other countries and coordinate initiatives on reducing greenhouse gas emissions via the UN’s Non-State Actor Zone for Climate Action portal (NAZCA), which recognises the importance of sub-national actors in climate action. As of June 24, 331 US cities had adopted the Paris agreement

These pledges may not be legally binding, as they are when countries sign agreements, but the commitments of US cities, states and companies, which will be reported and measured through NAZCA’s data partners, may well have a significant environmental impact.

As former New York City mayor Michael Bloomberg, a billionaire philanthropist who has invested US$15 million in American cities’ effort to engage internationally, said about mitigating climate change in a recent interview on National Public Radio, “Local governments can do something, state governments less and federal governments almost nothing.”

Large cities give rise to the “urban heat island” effect, in which heat-trapping concrete and asphalt replace natural vegetation and water. This steamy situation is exacerbated by heat from cars, subway systems, air conditioners and the like.

According to new research reported in the journal Nature Climate Change, the heat island effect in the world’s most populous cities – a clutch of sprawling megalopolises that includes Chicago, Houston, and San Diego in the US, as well as Shanghai in China and Lagos in Nigeria – is expected to add two degrees to global warming by 2050.

The study by Francisco Estrada, W. J. Wouter Botzen and Richard S. J. Tol provides the first quantitative assessment of the economic costs of the joint impacts of local and global climate change for all major urban centres around the world.

The analysis, which looked at some 1,500 large cities, shows that the total economic costs of climate change for cities could be 2.6 times higher when heat island effects are taken into account than when they are not. For the worst-off cities, losses could reach more than 10% of their gross domestic product GDP by the end of the century.

There are relatively low-cost solutions to this highly localised problem, from cool pavements, which are designed to reflect more sunlight and absorb less heat, to green roofing.

According the the study, converting just 20% of a city’s rooftops and half of its pavements to modern heat-reducing versions could save up to 12 times what they cost to install and maintain, and reduce local air temperatures citywide by up to 0.8°C.

As study author Richard Tol has noted, “City-level adaptation strategies to limit local warming have important economic net benefits for almost all cities around the world. It is clear that we have until now underestimated the dramatic impact that local policies could make in reducing urban warming.”

So, from Pittsburgh to Phuket, cities will be essential for keeping the increase in the average global temperature below 2°C, the main goal of the Paris agreement.

The unprecedented bottom-up commitment to this international climate deal is also in the clear interest of participating states and cities, which are most likely to directly and immediately feel the impact of global warming.

California, for example, has a long-term commitment to reducing emissions, alongside its unique technological strengths in renewable energy and research on autonomous cars. Meanwhile, the island state of Hawaii is particularly sensitive to climate change-related sea level rises.

Mayors and governors are also the public officials responsible for common infrastructural needs that can help population centres mitigate climate change, such as reinforcing dikes and improving public transit – eco-friendly investments that also improve quality of life for residents.

In neighbouring Canada, where Prime Minister Justin Trudeau has made battling climate change a priority for his administration, many provinces, including populous Quebec and Ontario, are now making direct agreements with states and cities on cap-and-trade agreements and other environmental initiatives.

The world’s response to Trump’s withdrawal from the Paris agreement is a powerful reminder that global challenges – not just climate change but also conflict, migration and others – are profoundly intertwined with local and regional issues.

At a time when countries’ openness to the world has become a matter of contention, many of the world’s most pressing problems still require not just active international collaboration between nation states but also engagement on all levels of government, whether the administration in Washington likes it or not.

Paris, in this sense, was just the beginning.

Until September 2016 Luc Soete (15 September 1950, Brussels) was Rector Magnificus of Maastricht University. Before that he was Director of the Maastricht Economic and Social Research Institute on Innovation and Technology (UNU-MERIT) located in Maastricht, The Netherlands and Professor of International Economic Relations and Director-Dean of the Maastricht Graduate School of Governance at Maastricht University. He is a member of the Advisory Council for Science and Technology Policy and the Royal Dutch Academy of Science.

Luc Soete graduated in economics from Ghent University, Belgium. He obtained a DPhil in economics from Sussex University where he worked as senior research fellow at the Science Policy Research Unit in the late 70’s and 80’s. From 1984 till 1985 he was visiting associate professor at the Department of Economics at Stanford University, USA. In 1986 he joined the new Faculty of Economics and Business Administration (now called the School of Business and Economics) at Maastricht University as professor of International Economics Relations. In 1988 he set up the research institute MERIT (Maastricht Economic Research centre on Innovation and Technology) which merged under his direction in 2005 with UNU-INTECH to become UNU-MERIT. In 2010 he became Director-Dean of the Maastricht Graduate School of Governance of Maastricht University. He is a member of the Board of the Maastricht School of Management and the Belgian media company Concentra.

Over the last 30 years, Luc Soete has contributed as (co-)author and (co-)editor to some 11 books, 50 refereed articles and some 100 chapters in books. In 2002, he received the MSM Honorary Fellow Award, in 2007 the Belgian reward Commandeur in de Kroonorde and in 2010 a Doctor Honoris Causa from his Alma Mater, the University of Ghent.