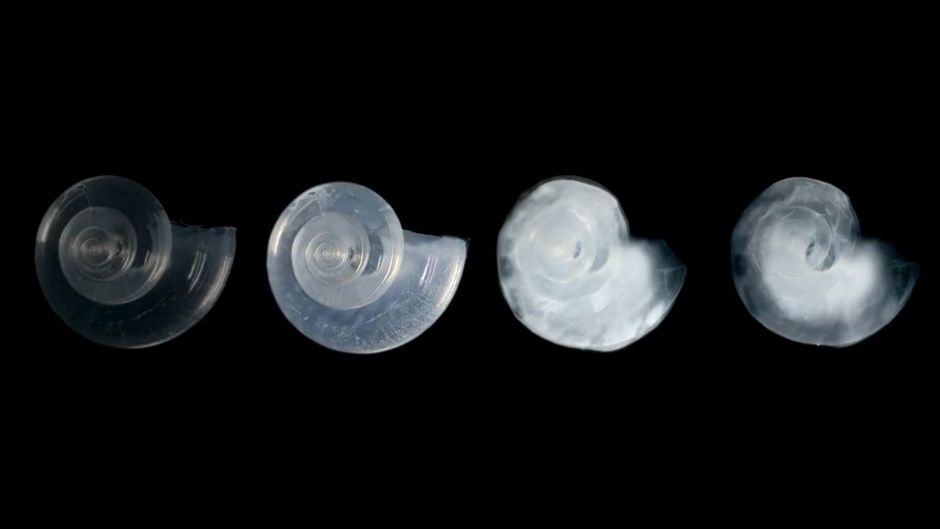 A three-year assessment from a team of international scientists will detail how the phenomenon dubbed “climate change’s evil twin” is shaping up to be a global problem. The rapid acidification of the Arctic Ocean will have widespread impacts to be felt for “tens of thousands of years” even if we stop emissions now, say the scientists.

The primary driver of this acidification is the ocean’s uptake of carbon dioxide. When carbon-rich materials such as coal or oil are burned, some of the CO2 is absorbed by the oceans, slowing its build-up in the atmosphere and the pace of human-induced climate warming, but at the same time increasing seawater acidity. As a result of this process, the average acidity of surface ocean waters worldwide is now about 30 percent higher than at the start of the Industrial Revolution, say the experts.

The assessment’s key scientific findings were discussed last week as part of the Arctic Monitoring and Assessment Programme’s (AMAP) International Conference on Arctic Ocean Acidification that took place in Bergen, Norway. The report and its policy recommendations will be presented to the Arctic Council Ministers at their meeting in Kiruna, Sweden, on 15 May.

The key findings of the study explain that scientists have measured significant rates of acidification at several Arctic Ocean locations. In the Nordic Seas, for example, acidification is taking place over a wide range of depths — most rapidly in surface waters and more slowly in deep waters. Decreases in seawater pH of about 0.02 per decade have been observed since the late 1960s in the Iceland and Barents Seas. Notable chemical effects related to acidification have also been encountered in surface waters of the Bering Strait and the Canada Basin of the central Arctic Ocean.

“Arctic ocean acidification is happening at a faster rate than found in other global regions. This is because climate change such as warming and freshening of the oceans is acting in tandem with the enormous oceanic uptake of C02,” said Bellerby.

Sam Dupont, researcher at the University of Gothenburg, says that “something really unique is happening. This is the first time that we as humans are changing the whole planet; we are actually acidifying the whole ocean today.”

[quote quote=”Even if we stop emissions now, acidification will last tens of thousands of years. It is a very big experiment.” author=”Richard Bellerby, Norwegian Institute for Water Research” type=”text” ]

“Continued rapid change is a certainty,” Bellerby told BBC News.  “We have already passed critical thresholds,” warned Bellerby. “Even if we stop emissions now, acidification will last tens of thousands of years. It is a very big experiment.”

“The most optimistic prediction,” Dupont says, “tells us that within few decades, by the end of this century, the ocean will be two times more acidic. And we also know that it might be even faster in the Arctic.”

Ocean acidification will have direct and indirect effects on Arctic marine life, the findings state. And while it is likely that some marine organisms will respond positively to new conditions, others will be disadvantaged, possibly to the point of local extinction.

Because Arctic marine food webs are relatively simple, Arctic marine ecosystems are vulnerable to change when key species, such as Arctic cod, are affected. But the study notes, the team was not able to “assess the precise nature and extent of Arctic ecosystem vulnerability, as most biological studies have been undertaken in other ocean regions. Arctic-specific long-term studies are urgently needed.”

And despite some knowledge gaps, it is clear that Arctic marine organisms, and the indigenous communities and commercial fisheries (important to northern economies) that rely on them, are experiencing not only ocean acidification but other large, simultaneous changes like climate change, habitat degradation, and pollution.

See more in the Arctic Ocean Acidification video from AMAP:

Climate Change’s ‘Evil Twin’: Ocean Acidification by Carol Smith is licensed under a Creative Commons Attribution-NonCommercial-ShareAlike 3.0 Unported License.
Based on a work at https://www.commondreams.org/headline/2013/05/06.