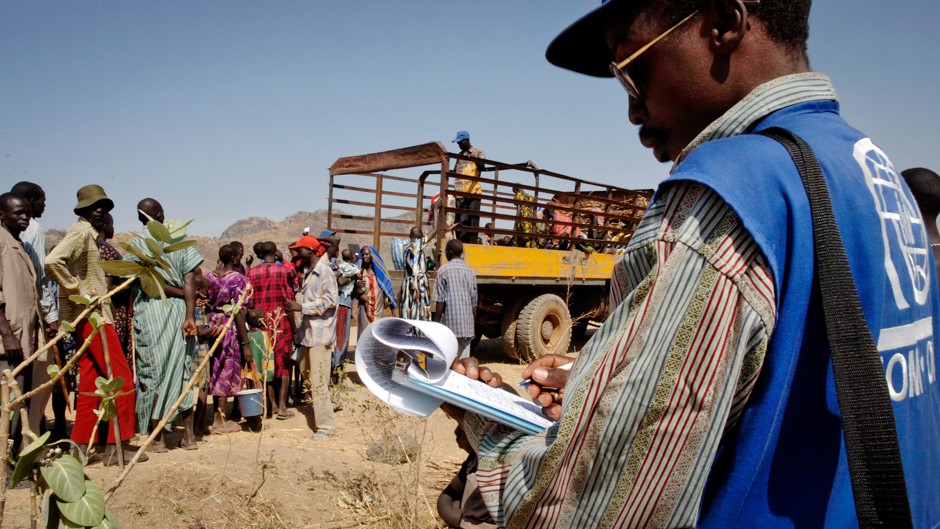 Climate change is forcing people to flee their homes. But when does someone become a climate migrant, and what does the status mean? Dina Ionesco from the International Organization for Migration (IOM), explains.

Ionesco has been working at the IOM since 2011 in the field of climate change and the environment. She coordinates IOM’s participation at international climate negotiations, establishes partnerships with other institutions or training programs and writes for IOM’s publications.

The Geneva-based IOM fights for the rights of migrants around the world. The organization’s predecessor was founded in 1951 to address migration issues following World War II. Today, the IOM includes 151 member states.

Global Ideas: Ms. Ionesco, a man named Ioane Teitiota from the island of Kiribati has sparked a global debate because he’s the first person ever to seek asylum for his family as climate refugees. He says his family has no future in their country because of rising water levels. Now, New Zealand has to decide whether to grant him asylum in a landmark case. You work for the International Organization for Migration (IOM), one of the most important global aid groups for migrants. Would the IOM recognize Ioane Teitiota as a climate refugee?

Dina Ionesco: New Zealand will have to decide based on the case. It’s the prerogative of the state to decide what is considered a reason to grant asylum. Our organization is only there to offer a platform for countries to discuss issues and also to work together to innovative solutions and bring things to the agenda.

We, at the IOM don’t use the ‘climate refugee’ terminology because it’s not directly in the Geneva Convention which officially lays down when somebody is recognized as a refugee. It would be an interpretation and we can’t do that. What matters for us is that in a case like this, the rights of a person are recognized, that the best solution is found for the rights of the migrant. Refugee is a term from the Geneva Convention that has to show persecution for gender, for religion, for conflict, war – it’s very specific.

Still, the IOM does make clear that climate change can be a driver of migration. Your member states agreed back in 2007 to use the term ‘environmental migrant’ right?

Yes, this definition is the result of 20 years of hard work. It’s now used often in the international debate but it’s also criticized a lot. The definition emerged in the run-up to the climate conference in Copenhagen at a time when awareness was growing in the IOM about the impact of the environment and climate on migration patterns. At the same time, the worsening of environmental conditions due to climate change was becoming more apparent.

Who does the IOM consider to be an environmental migrant?

The most common reason why people leave their homes because of environmental factors is floods and droughts as well as changes in precipitation patterns. Our definition includes all kinds of migration caused by changes in climatic conditions – both due to acute natural disasters or because of a slow worsening of environmental conditions, for example, soil and ground degradation. The important thing about our approach is that we see ‘climate refugees’ as those who flee from pressing, immediate dangers as well as those who decide to leave their homes voluntarily.

The IOM maintains that its definition doesn’t carry any normative consequences, but rather describes what an environmental migrant is. If it doesn’t have any consequences, why do you need a term for it?

We need it in order to sensitize people that environmental changes play a huge role in triggering human migration. And we need it as an advocacy tool so that environment matters and migration are given more importance on a political policy level.

Is the IOM fighting to make sure that environmental migrants are legally recognized, for example as part of the Geneva Convention?

We have to be realistic about what countries want. At the moment they’re not interested in changing the Geneva Convention, so we are not trying to push that. It’s important to keep in mind that simply recognizing the climate refugee status would still exclude a lot of environmental migrants, because a large part of migration takes place as internal migration, within a country. Of course, the legal status of migrants who cross borders plays a big role but it’s just one way to support migrants.

What other possibilities are there?

The IOM tries to works towards strengthening all possible instruments. That could, for instance, be bilateral agreements on a temporary taking on of people after a natural catastrophe in a neighboring country, allowing people in as economic migrants or setting up help and aid offices. Actually, the structures to support climate refugees are already in place. They just need to be used and expanded. For instance, we have the so-called Kampala Convention, an agreement among African nations that regulates domestic migration. But countries that are now working on adaptation strategies for climate change should also pay more attention to the issue of mobility on a national level. And of course, you can and must look at the issue from the perspective of human rights and protect the rights of migrants in every situation.

Ioane Teitiota from Kiribati is the most prominent climate refugee, or environmental migrant, right now. Will we see more and more people in that role?

The global polling institute Gallup released a survey in 2011 that one in every ten adults around the world assumes that environmental conditions will be at least one driver for migration in the coming decades.

But you have to keep in mind that the reasons for migration are often very complex. In addition to environmental factors, other factors such as the political situation, conflicts or economic conditions in a country also play a role. Let’s take, for example, the Horn of Africa. Here, drought, hunger and political conflicts have led to a complex form of migration. The environment is just one of many factors.

What does migration have to do with security? In 2011, the UN Security Council first looked into the link between climate change and security.

There is a connection between migration and security. The issue of environmental migration touches on all social aspects. Among other things, migration heightens existing conflicts, for instance when people who are fleeing from drought migrate to a region that’s also suffering from a lack of water. That puts a strain on communities.

With such a complex issue, how can you actually measure how many environmental migrants there are worldwide?

We need to be extremely careful with numbers. The important thing is what these numbers exactly represent. One possibility is to count people who live in regions potentially threatened by climate change. For instance, the so-called Foresight Report in the UK says that 520 million people each year are affected by flooding in coastal zones and 120 million people are exposed to tropical cyclones. These numbers sound dramatic but don’t say anything about how many people are actually affected and how many will as a result migrate.

In addition, it’s difficult to get reliable statistics because a large share of migration takes place within countries. What we have are relatively precise figures on how many people around the world had to leave their homes because of natural disasters – in 2012, that was around 32 million people.

But overall, it makes no sense to be obsessed with big numbers. The phenomenon of climate migration is very complex and big numbers threaten to blur the differences between different migration patterns. One should be careful in viewing migration only negatively. It also holds huge potential for adaptation to climate change.