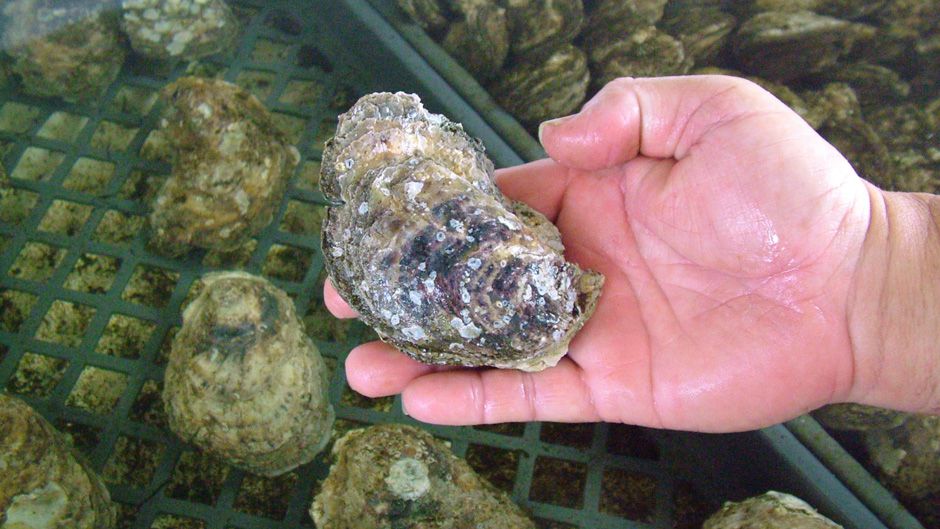 Simply put, this ocean acidification news coming out of Oregon State University in the United States is huge. Scientists have solved the mystery of what’s been killing baby oysters at the Whiskey Creek Shellfish Hatchery, proving that elevated carbon dioxide is the culprit.

It’s the first concrete evidence that ocean acidification — a phenomenon caused by pollution from cars, coal plants and other machines that burn fossil fuel — is harming commercially valuable species and businesses in the northwestern Pacific region of North America.

And unlike laboratory experiments that expose creatures to water that’s been chemically manipulated, the study published in the journal Limnology and Oceanography used real-world conditions encountered by one of the region’s largest independent shellfish hatcheries. As Burke Hales, an OSU chemical oceanographer and co-author of the study, explains:

“This is one of the first times that we have been able to show how ocean acidification affects oyster larval development at a critical life stage. The predicted rise of atmospheric CO2 in the next two to three decades may push oyster larval growth past the break-even point in terms of production.”

[quote quote=”The predicted rise of atmospheric CO2 in the next two to three decades may push oyster larval growth past the break-even point in terms of production.” author=”Burke Hales” type=”image” image=”4598″ ]

“It’s really weird. They just won’t develop any further. They just sort of fade away. You’ll go from having 500 million to maybe 300 and down to 100 and maybe you’ll get a few of them that manage to make it.”

At first, they thought the massive mortalities were caused by a bacteria. But after the hatchery addressed that problem, the oyster larvae continued to die. For nearly a year, they had virtually no decent production, creating a bottleneck in the region’s oyster growing industry that generates $273 million in economic activity every year.

That’s when workers started thinking about ocean chemistry, which is becoming more corrosive as humans pump increasing levels of carbon dioxide into the atmosphere. Globally, our oceans have become roughly 30 percent more acidic since we began burning fossil fuels in abundance during the Industrial Revolution. On top of that, the Pacific Northwest coastline also experiences seasonal upwelling events that draw colder, carbon-dioxide rich water from the deep towards shallow beaches and shorelines.

Adding more carbon dioxide to seawater does two things: decreases its pH and makes calcium carbonate ions less available. That’s a key building block that thousands of different species need to build shells and skeletons — from tiny plankton that salmon and whales depend upon to mollusks like clams and oysters.

In slightly more acidic conditions, those creatures have to expend more energy to build their shells and skeletons. That may make it more difficult for them to find food, reproduce or compete with other marine animals. Think about a restaurant that suddenly has a 30-percent rent increase. The owner may have to use lower quality ingredients or cut back on wait staff, which makes it harder to survive in the marketplace.

As water becomes even less saturated in calcium carbonate, those shells, skeletons and protective structures can actively begin to dissolve. Sticking to the restaurant example, it would be like losing the walls and roof, one brick at a time.

How scientists solved the mystery

Whiskey Creek employee Alan Barton eventually began to notice that the die-offs coincided with upwelling events in Netarts Bay. But no one was sure exactly what it was about the water that was so lethal.

By continuing to rear oysters in water samples taken at different times from Netarts Bay, researchers tested different theories. In the end, they clearly linked the production failures to higher carbon dioxide levels in the water in which the larval oysters are spawned and spend the first 24 hours of their lives. That’s the critical time when the oysters develop from fertilized eggs to swimming larvae, and build their initial shells.

But the the OSU researchers also found that larval oysters could have a delayed response to compromised water chemistry, which may cast new light on other experiments looking at the impacts of acidification on shellfish. In their study, they found that larval oysters raised in water that was acidic, but non-lethal, had significantly less growth in later stages of their life.

As George Waldbusser, a benthic ecologist in OSU’s College of Earth, Ocean, and Atmospheric Sciences, explains:

“The takeaway message here is that the response to poor water quality isn’t always immediate… Short-term experiments of just a few days may not detect the damage.”

Unfortunately, scenarios like those found in a hatchery — where water chemistry and animals’ responses can be so precisely monitored and measured — are rare. And the universe of marine creatures that may also be affected by acidifying oceans is vast. So we’ll need to continue to rely on laboratory experiments to give us an idea of how many other shelled creatures may fare poorly in future conditions.

To be sure, some creatures may do just fine or thrive in more acidic seas. Others will likely die. Now that we have evidence that carbon dioxide emissions are helping kill local Northwest species — especially one that supports thousands of rural jobs and is a cornerstone of local dining experiences — it’s even more important to start figuring out who the other losers and winners will be.

This article appears with permission of Sightline Institute, an independent, nonprofit research and communications centre that aims to help make North America’s Pacific Northwest region a global model of sustainability with strong communities, a green economy, and a healthy environment.

Jennifer Langston is a researcher and Sightline Daily editor. She combs through thousands of headlines day to bring you the region’s top sustainability news. She also writes about issues such as energy, oceans, and riding the bus with her toddler. Previously, she worked at the Seattle Post-Intelligencer and other papers in Washington and Idaho.