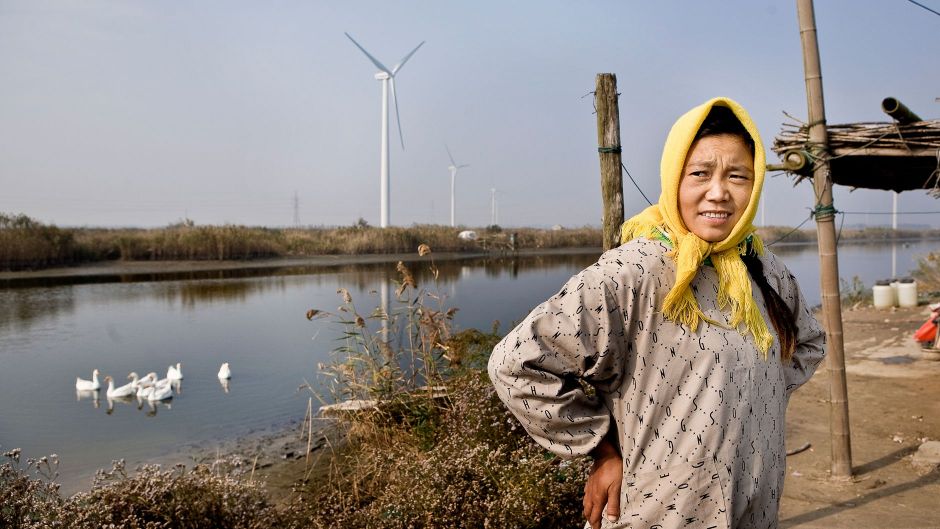 These days, it might be safe to say that most people in the industrialized world know that burning fossil fuel contributes not only to air pollution but to global warming. Indeed, news travelled fast recently when the amount of carbon dioxide in the atmosphere exceeded 400 parts per million for the first time since “horses and camels lived in the high Arctic” during the Pliocene Epoch.

With a growing global population and the spreading of aspirations for consumption-oriented economic growth, this problem is a complex one.

In order to improve living conditions in developing countries, providing access to energy to large numbers of people who formerly did not have it is an essential goal. To mitigate the effects of this swelling demand, the United Nations set up the Sustainable Energy for All initiative that aims to boost access to “energy that is accessible, cleaner and more efficient”.

The provision of modern, clean sustainable energy for all would increase global energy demand by a mere one percent in 2030 and CO2 emissions by 0.6 percent. However, at the same time there is a need to tackle the continuing growth in fossil fuel use in non-OECD countries and the associated increases in global CO2 emissions.

Emerging economies are painfully conscious of emissions in this age of burgeoning carbon awareness and international pressure, but their citizens too require access to energy. In China, rapid economic growth and booming energy consumption have brought escalating greenhouse gas (GHG) and air pollutant emissions. It has thus become the largest emitter of CO2 in the world, pushing emissions reduction up on the country’s list of most important long-term policies.

In response, the Chinese government has set a carbon intensity (CO2 emissions per unit of gross domestic product) reduction target of 40–45 percent relative to 2005 levels and a non-fossil primary energy target of 15 percent by 2020. In addition, on 18 June, the country launched the first of seven regional emissions-trading schemes, in its first attempt to cut emissions using market mechanisms. Moreover, air pollution has become a major problem and the government has made combating it one of the main priorities of the next several years, particularly in major cities.

Finding the win-win of wind in China

Understanding the possibilities of meeting the Sustainable Energy for All goal in cities without further stressing our global and local environments is one of the objectives of a UNU Institute of Advanced Studies project called Urban Development with Co-Benefits Approach (with the support of the Ministry of the Environment Japan). The project looks at the multiple opportunities for win-win situations between climate change and other developmental goals in cities.

As part of this project’s work, a recent paper, led by the Institute of Applied Ecology of the Chinese Academy of Science in Shenyang and co-authored by UNU-IAS’s Jose A. Puppim de Oliveira, focused on China’s energy/emission challenges. The paper notes that despite actions to mitigate emissions and improve air quality, limited economic resources are slowing efforts to implement measures to control both types of emissions. This type of situation can benefit from an approach that uses resources efficiently to solve multiple environmental problems. While various studies have shown that there are beneficial linkages (co-benefits) to tackling climate change and air quality together, the research has lacked economic analysis of the perceived co-benefits.

Published in the Renewable Energy Journal, the paper took just that novel approach. The study estimated the reduction in CO2 emissions and air pollutants, and the amount of water saved through use of wind power in China’s largest administrative division — the Xinjiang Uygur Autonomous Region. Further, the team also analyzed the cost-effectiveness and economic benefits of wind power in Xinjiang, which is already the largest base of wind power in China.

The authors point out that though the political rhetoric may at times acknowledge that issues of climate change, air quality and energy supply are intertwined, policy synergies are lacking and these issues often compete against each other in practice. The paper argues that policymakers need to develop a deeper appreciation for the multiple, far-reaching benefits of low carbon initiatives and, in particular, the strategic strength of using climate change mitigation policy as a starting point for advancing a society’s multi-dimensional objective of energy sustainability.

At a time when China’s worries about energy security and climate change are compelling the country to focus on developing renewable energy alternatives, the paper gives policymakers a clear picture of how the mitigation of CO2 and air pollutant emissions and the conservation of water achieved with wind over coal-fired power are notable and that the total economic co-benefits are substantial.

Xinjiang Uygur Autonomous Region, like many regions in China, suffers from severe environmental problems and has seen a dramatic rise in fuel consumption, the authors found. The region’s GDP grew from approximately US$26 billion in 2004 to US$103 billion in 2011. This increase, the paper explains, was primarily thanks to the central government’s boosting of economic development in western China through exploration of the region’s abundant fossil fuel reserves such as coal, crude oil and natural gas.

Based on the region’s fuel consumption data from 2001 to 2010, the study team calculated the emissions of CO2 and air pollutants from Xinjiang’s main economic activities: industry, heating and the thermal power generation sectors. Selected for the study were sulfur dioxide (SO2), nitrogen oxide (NOx) and inhalable particles (PM2.5, particulate matter smaller than 2.5 micrometers) because these air pollutants severely affect sustainable development in China.

In order to put a price on the reductions brought by wind power to both those types of emissions, the researchers also calculated the net annual cost of a case study wind power project. Another main equation in the research was to find the emissions reduction and water saving achieved by use of wind power compared to coal-fired power (calculated using annual fuel consumption from coal-fired power, emission factors of coal for CO2 and air pollutants, and water consumption).

The goal was to calculate the cost-effectiveness of wind power generation by taking the net annual cost of the wind project and dividing it by the project’s annual reduction in the amount of air pollutants and CO2 or water savings as compared to coal-fired power.

Prior to doing the final calculation of the co-benefits of wind power, the team looked at possible alternatives for reducing emissions from coal-fired plants.

Firstly, they note, is that China requires coal-fired power plants to install desulfurization and dust removal systems. However, these desulfurization systems can only reduce emissions of sulfur oxide, thus necessitating the installation of end-pipe technologies to address greenhouse gasses and air pollutants and posing an economic burden for the coal-fired power plant companies.

Next, the authors address carbon capture and storage (CCS), with the paper stating that currently, there is only one coal-fired power plant that applies the technology (Gao Pai Dian, located in Beijing). This plant releases four million tons of carbon dioxide every year, of which the CCS system captures 0.075 percent of CO2 emissions; in addition, energy consumption of the CCS system accounts for 30 percent the plant’s total energy consumption. (For more about CCS, see another recent UNU-IAS paper.)

Further, the paper points out that studies have identified potential problems with maintaining the integrity of a CCS reservoir because of chemical reactions following carbon dioxide injection. The authors give the example of how injection of carbon dioxide can acidify the fluids in a reservoir, dissolving minerals like calcium carbonate and thus possibly increasing permeability, which could allow carbon dioxide-rich fluids to escape the reservoir and contaminate aquifers used for drinking water.

The research therefore found that the total cumulative mitigation in emissions of CO2 and air pollutants (shown in Figure 1) and the amount of water saved (1116 x 104t) make wind power more cost-effective than coal-fired power in all areas (as shown in Figure 2).

Finally, the team analyzed the economic co-benefits (ECB) of wind power. This was calculated by multiplying the cost-effectiveness (CE) of emissions reduction using wind power by the annual reduction in amount (ARA) of emissions of CO2 and air pollutants, and water used.

Underlining the potential of this clean energy source to save expenditure and tackle multiple environmental problems all at once, the study notes that the total economic co-benefits of wind power from 2006-2010 accounted for 0.46 percent of Xinjiang’s GDP.

The paper closes with a discussion of the region’s wind power scene. While Xinjiang Uygur Autonomous Region is replete with large fossil fuel reserves, it is also home to abundant wind resources. The available exploitation area for wind power is approximately 0.156 million km². In 2012, the on-grid electricity production was 3.33 TWh from January to September.

Of course, wind power faces some typical challenges surrounding energy consumption patterns and variable wind conditions. Changes in wind turbine electricity production do not always correspond with the electricity demands of consumers: when wind turbines generate massive amounts of electricity, consumer requirements might be low. However, the study indicates that responses to such problems are already in the works for Xinjiang.

The State Grid Corporation of China promotes the development of the national standards for wind power. Since 2006 it has published 20 guidelines for maintaining optimal wind power standards. These include wind power access, working schedule, and network monitoring. Further, the construction of a regional transmission grid (400 kV) and bulk transmission grid (above 400 kV) to prevent wasted wind power is underway in Xinjiang. The Electric Power of Xinjiang Company is also investing in setting up transmission grids and will focus on incorporating wind power into the power network before the implementation of wind power projects so as to limit wasted power.

Finally, China’s grid plans for the whole country are very ambitious. The authors note that the State Grid Corporation will construct several transmission grids, including from south Hami to Zhengzhou Province, from north Hami to Chongqing Municipality (directly under the Central Government), from Zhundong to Sichuan Province and from Xinjiang to China’s northwest region.

Indeed the study may foreshadow a boom; at the China-Eurasia Expo in the region last September, reports say a large number of clean energy project contracts were signed.  Indeed, a manager at a Xinjiang turbine manufacturer (the world’s third largest), Goldwind Global, said, “We have seen a 100 percent increase of sales every year between 2000 and 2010.”

The use of wind power could thus prove to be a promising and multi-beneficial enterprise in Xinjiang.