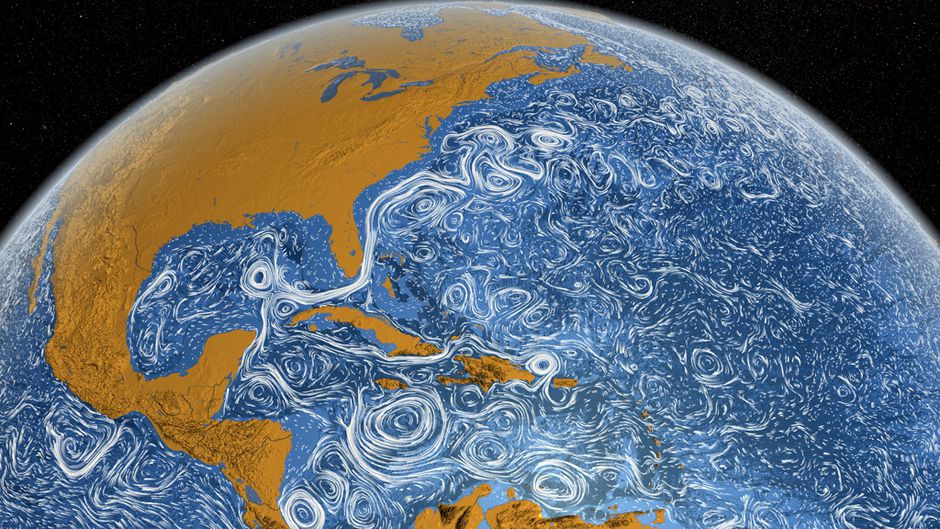 Climate scientists have once again confirmed an alarming slowdown in the circulation of the Atlantic Ocean — the process that drives the current that warms Europe, and powers the planetary climate.

And this time, they are prepared to say that the changes are recent — and may be linked to global warming.

The Atlantic Conveyor is a great invisible river that flows in two directions at the same time. The equatorial surface waters — warm, and therefore less dense — flow towards the north in the form of the Gulf Stream. Around Greenland, the denser and colder Arctic waters sink to the ocean bottom and begin their progress towards the south.

It is the difference in temperatures that maintains the turnover and keeps the climate engine going.

As a consequence, the two-way traffic of warm and cold water redistributes heat around the planet and keeps Britain and maritime Europe in relatively mild conditions.

But as global average temperatures rise, and the Greenland ice sheet melts, ocean scientists have warned that the speed of the ocean turnover could be put at risk.

Stefan Rahmstorf, an ocean physicist at the Potsdam Institute for Climate Impact Research in Germany, is lead author of a report in Nature Climate Change that says they now have evidence of a slowdown during the 20th century, and greater weakening since the first alarms 40 years ago about the possible effects of greenhouse emissions.

The paradox of the Atlantic current is that, in a warmer world, it could slow down or halt, which would deliver uncomfortable consequences for maritime Europe.

Fears of such an effect provided the scenario for the 2004 climate disaster movie, The Day After Tomorrow, which predicated a frozen Britain and a glaciated US.

“Now we have detected strong evidence that the global conveyor has indeed been weakening in the past hundred years, particularly since 1970.”

No such extreme outcome was ever likely, but the Gulf Stream certainly makes a big difference to Britain. A former UK chief scientist once calculated that it delivered 27,000 times the warmth that Britain’s power stations could supply and, as a consequence, the UK is on average 5°C warmer than it might be, given its latitude.

At a number of points in the last two decades, researchers have wondered about the strength of the Atlantic current, but since systematic oceanographic record-keeping began only relatively recently, they had no way of distinguishing between a natural oceanic cycle and real change.

So the Potsdam team used all available data, and “proxy temperatures” derived from ice-cores, tree-rings, coral, and ocean and lake sediments, to reconstruct the story of the Atlantic current — and, in particular, the phenomenon called the Atlantic meridional overturning circulation (AMOC) — for the last 1,000 years.

The changes happening now have no precedent since 900 AD, they say. And the increasingly rapid melting of the Greenland icecap — bringing an increased flow of water that is less saline and also less dense, and therefore less likely to sink — could disturb the circulation.

The consequences of all this could, they say, “contribute to further weakening of the AMOC” in the coming decades.

This is not the first such alarm. The same weakening was identified last year, but at the time researchers could not be sure they were not looking at a natural fluctuation.

Now they are sure, and they suspect that the cooling of the north Atlantic that they now observe is even stronger than most computer simulations have so far predicted.

“Common climate models are underestimating the change we’re facing, either because the Atlantic overturning is too stable in the models or because they don’t properly account for the Greenland ice sheet melt, or both,” says one of the co-authors, Michael Mann, professor of meteorology at Pennsylvania State University in the US.

“That is another example where observations suggest that climate model predictions are in some respects still overly-conservative when it comes to the pace at which certain aspects of climate change are proceeding.”

Another of the authors, Jason Box, professor of glaciology at the Geological Survey of Denmark and Greenland, adds that “the human-caused mass loss of the Greenland ice sheet appears to be slowing down the Atlantic overturning — and this effect might increase if temperatures are allowed to rise further”.

If the Atlantic conveyor system continues to weaken, ocean ecosystems will change, fishing communities will be affected, and some coastal cities could be hit by additional regional sea level rises.

The stakes are high. If the Atlantic conveyor system continues to weaken, ocean ecosystems will change, fishing communities will be affected, and some coastal cities — such as New York and Boston in the US — could be hit by additional regional sea level rises.

The 2004 Hollywood version — promoted with a huge poster of New York’s Statue of Liberty all but covered by ice — is not likely to happen. But if the ocean circulation weakens too much, there could be a relatively rapid and difficult-to-reverse change in the world’s climate system.

The Intergovernmental Panel on Climate Change estimates that there is a one-in-10 chance of this “tipping point” happening within the 21st century.

But the evidence from the Potsdam team is now likely to prompt other climate scientists to go back to their calculations and re-evaluate the risk.

Concern as Climate Impacts on Gulf Stream Flow by Tim Radford is licensed under a Creative Commons Attribution 4.0 International License.