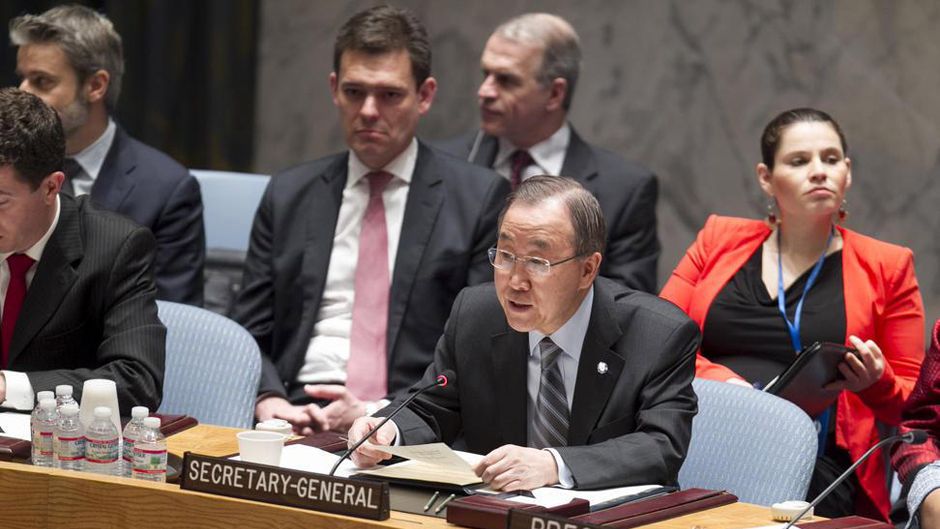 Despite the current unprecedented political will to eliminate sexual violence in conflict, hold perpetrators to account and support victims, the reality is that raping a woman, child or man is still a largely “cost-free” crime, United Nations officials warned today, appealing to all States to strengthen their cooperation to end impunity and protect the vulnerable.

“This grave human rights abuse is as destructive as any bomb or bullet,” UN Secretary-General Ban Ki-moon said, opening the Security Council’s day-long debate on sexual violence in conflict, a serious crime, which, he said, inflicts unimaginable suffering on victims, impedes peace and contributes to enduring poverty and insecurity.

The Council, through successive resolutions, has created a strong global framework for prevention. “Grievous violations still occur too often, but we are beginning to make tangible progress,” Mr. Ban said, referring to his latest report on issue, the focus of today’s debate. Covering 21 countries of concern, the report makes concrete recommendations, both to the affected States themselves and to the wider international community.

Compiled by Mr. Ban’s Special Representative on Sexual Violence in Conflict, Zainab Hawa Bangura, who also briefed the Council today, the report outlines concerning trends, including the acute vulnerability of refugees and internally displaced persons, and the need for justice and assistance for all victims, regardless of gender. The plight of children born of rape, and the links between sexual violence, displacement and organized crime are also highlighted.

The Secretary-General in his remarks noted the progress made by several countries, including the Democratic Republic of the Congo (DRC) and Somalia, where “just a few years ago, rape in these conflicts seemed intractable and inevitable.” He explained that the DRC is developing new legal structures to end impunity, and Somalia has shown commitment at the highest level to end sexual violence, including signing a joint communique with the UN.

“Every day more countries are building the technical capacity to prevent and redress sexual violence,” said Mr. Ban, adding that another key element in political and peacekeeping missions has been the deployment of Women Protection Advisers. “Their expertise on human rights, gender analysis, and peace and security is helping to mainstream the prevention of conflict-related sexual violence into peacekeeping and special political missions,” he said.

In line with the principle of “Delivering as One,” UN Action against Sexual Violence is an inter-agency network of 13 UN entities. Chaired by Ms. Bangura, this coordination mechanism ensures the Organization’s response avoids duplication, leading to a measured, sustainable and coherent strategy that makes the best use of limited resources and the strengths of each agency.

“Prevention is our collective responsibility. Only through coordination and partnership can we succeed in protecting the most vulnerable,” said the UN chief, underscoring the importance of the Security Council’s continued leadership and support as stakeholders work together to eliminate sexual violence in conflict.

In her remarks, Ms. Bangura presented harrowing reports of wartime rape and other forms of conflict-related sexual violence, labelling such abuse a “great moral issue of our time” and declaring: “This crime, in its utter destruction of the individual and the pervasive way in which it undermines the prospect of peace and development, casts a long shadow over our collective humanity.”

Recalling her visit last year to Bosnia and Herzegovina, where she witnessed first-hand “the long-term implications of war-time sexual violence left unaddressed,” she said that an estimated 50,000 women were targeted with sexual violence during 4 years of conflict.

“But 20 years after the peace was made, impunity for these crimes still reigns. The truth, most likely, is that most of the survivors will see no justice, because the evidence is long lost and the perpetrators have long since ‘fled the immediate scene of the crime,’” she said.

Yet, the irony is that those same perpetrators never really went away. “They still walk among the women and their families, occupying positions of authority and power that shield them from justice,” Ms. Bangura said, emphasizing that for those victims, the perpetrators are “a daily reminder of their broken lives.”

“But the impunity that the perpetrators continue to enjoy is also a reminder to all of us – a reminder of our commitment to justice and accountability.”

At the same time, she emphasized that there have also been positive developments. “While the road ahead to eradicate sexual violence in conflict remains long and hard, there is some light on the horizon. Never before in history have we seen such a level of political will and momentum,” she said, echoing the Secretary-General’s acknowledgment of the respective steps taken by the DRC and Somalia to address the issue.

Ms. Bangura stressed however that most perpetrators of wartime rape are never brought to justice, and emphasized that unfortunately, the unacceptable reality is that today it is still largely ‘cost-free’ to rape a woman, child or man in conflict. “Sexual violence has been used through the ages precisely because it is such a cheap and devastating weapon.”

Thirty-four armed groups from countries on the Security Council’s agenda that are credibly suspected of rape and other forms of conflict-related sexual violence are named in the annex of the report. The annex also points to an unknown number of armed elements on all sides of the Syrian conflict. The list includes both government security forces and rebel groups.

Special Representative Bangura ended her statement with a message directly to the perpetrators: “There is no hiding place. If you commit, or command, or condone such crimes against humanity, humanity will pursue you relentlessly, and eventually you will be held to account. This is our solemn promise to the survivors.”