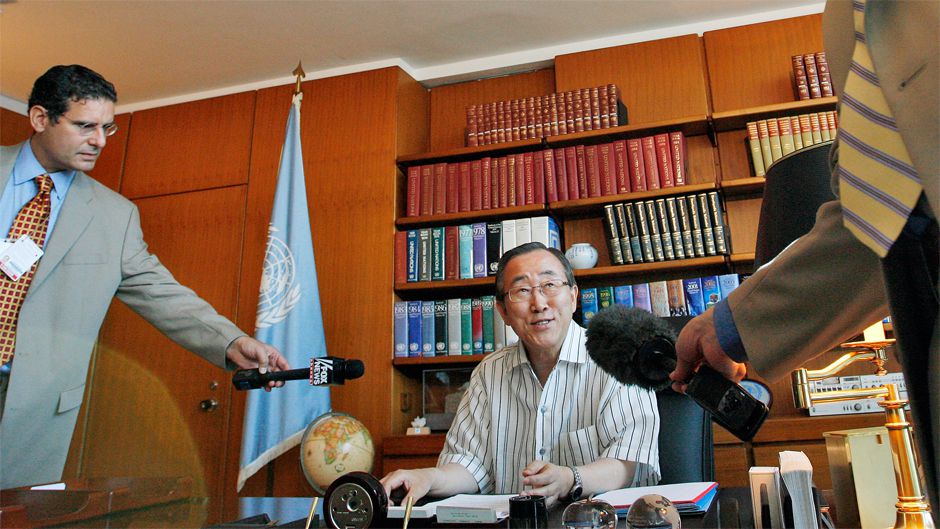 Cool is becoming the new buzzword in global efforts to reduce our carbon footprints and tackle climate change.

On 30 July 2008, UN Secretary-General Ban Ki-moon launched the “Cool UN” initiative to reduce energy consumption and the carbon footprint of UN Headquarters in New York. The campaign is designed to cut down on the use of air conditioning, thereby reducing greenhouse gas emissions and saving money.

As part of this campaign, UN employees are encouraged to adopt a casual dress code. Additionally, heating, ventilation and air conditioning systems are shut down during weekends.

When launching the campaign, the Secretary-General explained that “We have succeeded in moving climate change to the top of the international agenda for action, and this means that the UN must take action itself. We must lead by example, and if we are to ask others to take action, we must do so as well”.

The initiative is expected to cut 300 tons of carbon dioxide, which is equal to a 10 percent reduction in energy consumption. It would also produce cash savings estimated at US$100,000. In the winter months, there will be a 5°C reduction in heating. This will lower energy costs by about US$1 million and reduce carbon dioxide emissions by 2,800 tons for the year 2008.

The Cool UN campaign is modelled on the Japanese Team Minus 6% Cool Biz campaign. In 2005, the Japanese government launched a nationwide campaign called “Team Minus 6%” to raise awareness of global warming. The goal is to use team work to meet the minus 6 percent reduction commitment stipulated in the Kyoto Protocol.

In the summer of 2005, then Prime Minister, Koizumi Jun’ichiro, appealed to business leaders to allow office workers to remove ties and jackets, and to work in short-sleeve shirts from June to September.

By removing jackets and neckties, body temperature is reduced by up to 2°C. With this casual dress code, the office can then reduce the air conditioning and raise the room temperature up to 28°C. Compared to the Cool UN, the original Cool Biz in Japan is 3°C higher, making it a bigger challenge.

Prime Minister Koizumi and his cabinet led by example and took off their neckties and jackets during the first Cool Biz campaign in summer 2005. Surprisingly, the “Cool Biz” dress style has become a fashion trend in Japan during the summer season.

Warm Biz, on the other hand, encourages offices to keep the heating temperature at 20°C in order to save energy during winter.

The idea is to promote fashionable business clothes that are comfortable for work and not to depend too much on heating during the cold of winter.

Has Team Minus 6% had an impact?

Certainly a lot of people know about Cool and Warm Biz. As of August 2008, Team Minus 6% individual participants reached 2,335,140, while the number of organizations participating in the programme is 23,457. Japan’s powerful business association, Keidanren, which represents about 1,300 major companies, says 70 percent of its member companies now keep their air conditioners set to 28°C.

Team Minus 6% has conducted evaluation surveys after each Cool Biz and Warm Biz campaign. Their results show that more than 90 percent of respondents knew about these two campaigns and almost one third put them into action. In the 2007 Cool Biz campaign, the estimated CO2 reduction was 1,400,000 tons, equivalent to 3 million households’ CO2 emissions in one month. This was also a 50 percent increase from the level of the first Cool Biz campaign in 2005.

Cool Biz outside of Japan

The success of Japanese Cool Biz has attracted worldwide attention. In the summer of 2006, the Cool Biz campaign was introduced regionally as “Cool Asia. ”

Similar movements have started in other countries, such as Hong Kong, China and South Korea. In 2006, the UK’s Trade Union Congress called for a Cool Biz campaign during the summer heat wave.

Technological innovation alone won’t solve our climate change problem. We need to realize that the current modern, comfortable and super convenient lifestyles are partly to blame. For some, the idea of making sacrifices is really unappealing. If you work hard, you want to pamper yourself. In the end, why bother?

But many more people, and the number grows each day, feel that we need to change how we live and work. We need to change our mindset and think more about the daily things we do.

Innovative campaigns such as Cool Biz and Cool UN are excellent examples of how, through some simple changes, we find people taking actions that make a difference. What is more is that they actually enjoy wearing more comfortable and causal clothes in the office during those long hot summer days.

In responding to threats to the future of humankind, it is important for everyone, including world leaders to “say it and do it”.