A new solar electricity generation system that developers claim is the most efficient in the world, is being tested in South Africa’s Kalahari desert.

The Swedish company behind the project — which combines military technology with an idea developed by a 19th-century Scottish engineer and clergyman — says it is on the verge of building its first commercial installation.

In the remote Northern Cape province, huge mirrors reflect the sun across the brown Kalahari sand. This is the test site for Swedish company Ripasso, which is using the intense South African sun and local manufacturing know-how to develop their cutting-edge kit.

“Our whole team in South Africa has been hired locally, and our new systems have all been built with local South African labour. It works great,” says CEO Gunnar Larsson.

This is one of the few operational small-scale concentrated solar energy systems of its kind in the world. 34% of the sun’s energy hitting the mirrors is converted directly to grid-available electric power, compared to roughly half that for standard solar panels.

Traditional photovoltaic panels are able to turn as much as 23% of the solar energy that strikes them into electricity, but the average output for most systems is about 15% directly usable by the grid.

Jean-Pierre Fourie is Ripasso’s South African site manager. His crew has been testing the system in the Kalahari under harsh desert conditions for four years. “What we hope is to become one of the biggest competitors for renewable energy in the world.” 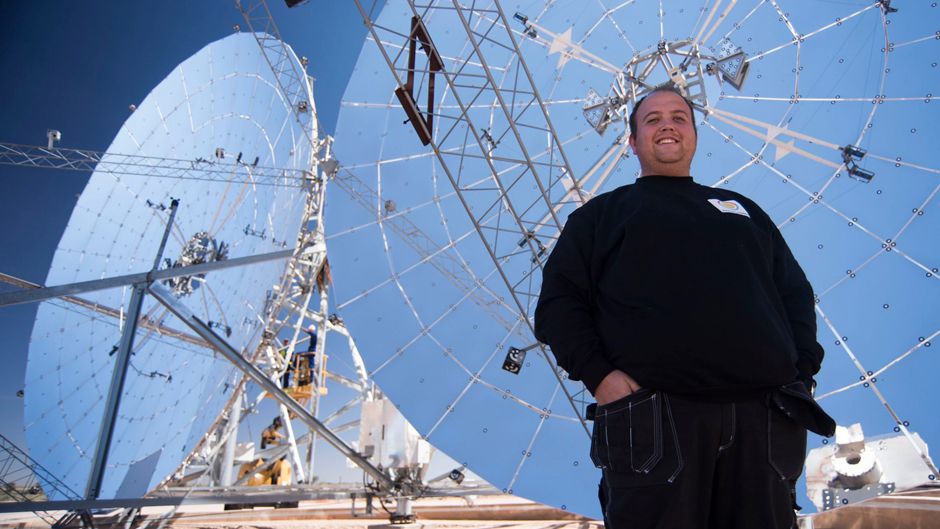 South African site manager Jean-Pierre Fourie, whose team have been testing the system for the past four years. Photo: © Jeffrey Barbee.

Independent tests by IT Power in the UK confirm that a single Ripasso dish can generate 75 to 85 megawatt hours of electricity a year — enough to power 24 typical UK homes. To make the same amount of electricity by burning coal would mean releasing roughly 81 metric tonnes of CO2 into the atmosphere.

Paul Gauche, director of the Solar Thermal Energy Research Group at the University of Stellenbosch has visited the test site many times. “The technology looks good to me. I’ve seen it working and I believe it meets the efficiency goals. The technology is proven with years of performance in the navy.”

He points out that it will be crucial to keep costs low enough to compete with photovoltaics, a significant challenge as their price falls every year. The system is also limited in that it is only useful in areas with consistent bright sunshine.

The technology works by using the mirrors as giant lenses that focus the sun’s energy to a tiny hot point, which in turn drives a zero-emission Stirling engine.

The Stirling engine was developed by Reverend Robert Stirling in Edinburgh in 1816 as an alternative to the steam engine. It uses alternate heating and cooling of an enclosed gas to drive pistons, which turn a flywheel. Because of the material limitations at the time, the advanced stirling engine that Ripasso uses was not commercially developed until 1988, when Swedish defence contractor Kokums started making them for submarines. The dishes constantly move and adjust in order to follow the sun. Photo: © Jeffrey Barbee.

Larsson worked in the Swedish defence industry for 20 years and realised what a clean and efficient generator could mean for renewable energy systems.

He wanted to bring the technology from the depths of the ocean into the sunshine, so he resigned as CEO of Kokums and licensed the technology to start Ripasso.

“When I founded the company in 2008 my youngest son came to me and said, wow daddy I am so proud of you, now I can tell everyone what you are doing, you are going to save the world instead of destroying it.”

The project has not been without its troubles. “Our major challenge over the last couple of years has been to get the technology accepted by the financing community, especially from the banks,” says Larsson.

Although banks have been unwilling to finance such novel technology, Ripasso has now secured private funding to begin their first large-scale installation. “We are very ready to head into the commercial phase,” says Larsson.

* This article was amended on 18 May 2015 to clarify details about the efficiency of traditional photovoltaic panels.

Jeffrey Barbee is a photojournalist and award-winning film producer and director. He works for Global Post, presents the US national TV show Earth Focus for LinkTV and writes and photographs for the Guardian UK, and various other publications. His 2012 film Creating a Climate For Change won best environmental film at the film festival of Colorado. He is the Director of The High Cost Of Cheap Gas, a current feature film exposing the global gas industry. He is the Director of Alliance Earth, a worldwide not-for-profit environmental and scientific reporting initiative and is a board member of the Mezimbite Forest Centre.