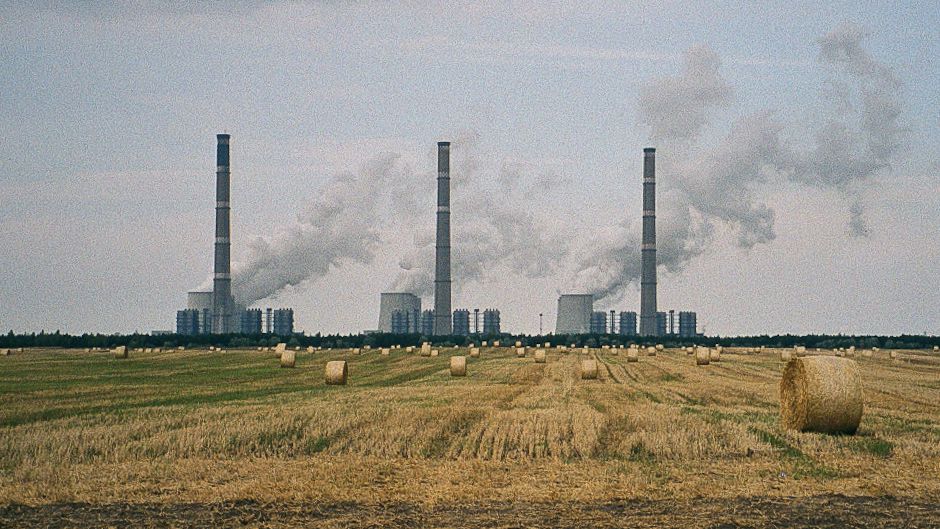 There is an unhealthy tendency to categorise environmentalists and members of the peak oil community as ‘doom and gloomers’ predicting the end of the world.

Most recently, Alex Steffen at World Changing jumped into the debate, claiming that the leaders of the Transition movement talk “cheerfully about passing peak oil, widespread food shortages and the idea of globalization crashing suddenly” or about expecting to see “a big population die-off”.

While there are comments to such effect sprinkled amongst peak oil literature and found in some of the recent documentaries on the topic (End of Suburbia, Blind Spot, etc.), it is unfair and incorrect to associate such ideas primarily with the Transition movement. Indeed, this kind of doom and gloom seems to dominate popular culture via Hollywood today, with a series of end-of-the-world or post-apocalyptic movies about to fill our screens — The Road, 2012 and the Book of Eli.

Rather than criticising the Transition movement, Alex Steffen should perhaps have reviewed the new documentary, featuring Michael Ruppert and entitled Collapse, and used it as the focus of his critique. This documentary is certainly a no-holds-barred, alarm-sounding look at peak oil and other topics, portraying “an apocalyptic future”.

If anything, the movement’s focus is the exact opposite of the world envisioned by Ruppert. Transitioners talk about human ingenuity and creativity, and argue that they will not disappear in the face of adversity and resource scarcity. Rather, ingenuity and creativity will remain the core human qualities guiding and shaping our transition to a better, post-fossil fuel world.

I think you really have to look at the work of one of the originators of permaculture, David Holmgren, to get a clear idea of why this “collapse scenario” can at times get associated with the Transition movement. In his recent book, Future Scenarios, Holmgren outlines four potential ways in which our global society could respond and adapt to peak oil and climate change. 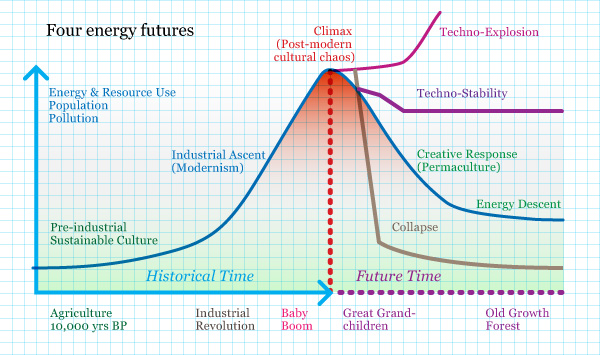 He begins by presenting the idea of a technological explosion, where we find some fantastic new energy source, continue on our current trajectory and go forth to colonise space. This is also described as the Star Trek scenario.

Next, he describes the techno-stability scenario where we shift over to green, renewable technologies and somehow manage to retain pretty much the same quality of life that we enjoy today in the industrialized world. This is by far the predominant scenario in the minds of most of our greener leaders and environmentalist friends.

The third scenario is really at the heart of the Transition movement and is called the energy descent scenario. It involves the reduction of economic activity, complexity and population in some way as fossil fuels are depleted. That “some way” is not a mass die-off in a short period of time. Rather, the timescale of the energy descent could be over decades or indeed centuries, so it could include naturally decreasing birth rates (much like we find in Japan, Russia, Italy and many other countries today).

The fourth scenario is the headline grabber and the one, it appears, that gets the attention of Alex Steffen. It is the collapse scenario (also known as the Mad Max scenario) and it implies that our existing societal and industrial systems breakdown. The collapse is rapid and continuous, there is no time for society to stabilize, an inevitable major die-off of human population occurs, as does the loss of our modern knowledge. No one in the Transition movement, or anywhere else, wants this scenario to visit our future. It should remain in our imaginations, not our reality.

The question here is why Steffen does not give a more measured discussion of the Transition movement and does not discuss the merits of energy descent, the preferred scenario of many in the movement? The answer may be because this scenario is largely ignored. To use Holgrem’s own words, it is a scenario that is seen as “unrealistic, defeatist and politically counter-productive.”

What the Transition movement has done, or is trying to do, is to turn this perception around and view energy descent as a positive process whereby people are freed from the “strictures and dysfunctions of growth economics and consumer culture.” Following this path, what awaits us all is a better world.

The long goodbye to growth economics

The use of emotive language like “collapse” or James Howard Knustler’s “Long Emergency” is designed to try to awaken people to the new reality of a world altered by peak oil and climate change. Most of us are in denial and actively seeking to be further disconnected from this reality.

But as Steffen rightly points out, “collapse is not a social change”. In response, I would say that a global energy transition — a global energy descent — is exactly that and it starts wherever people are aware and active.

Of course, it would be ideal if global energy transition starts with binding international agreements, national energy and climate plans and local action, but why wait for the snail-paced global climate negotiations to deliver? Now is the time to act. Today’s actions could have the benefit of extending the time period over which the descent needs to take place, thereby giving us more to time to adapt and as a result lessening the pain of changing and increasing our opportunities to be creative.

In many respects Jeff Rubin, former chief economist and chief strategist at CIBC World Markets, seems to have captured the spirit of the transition we are all involved in. In his book Why Your World is About to Get a Whole Lot Smaller, he suggests that the market will make a lot of decisions about how the transition will occur. As oil prices rise again to triple digits, it will be the market driving social changes, not the environmentalists.

For as long as possible, we will continue to exploit the available and expensive-to-extract remaining oil. We will employ as much alternative, renewable energy as we can, as quickly as we can. Then our priorities will shift to using what energy we have in the most cost effective and efficient ways. This will be followed by greater efforts to do more with less energy and so on.

The longer term could see a kind of reverse globalisation as everything is grown and manufactured closer to home, which in turn would help reduce our carbon emissions. This might not be a smooth transition and could be characterised by recessions like the current one, followed by recoveries, and if we still have not figured out the mess we are in, followed by new recessions mainly triggered by rising energy costs.

The earlier we wake up to this new reality and the quicker we start pulling in the same direction, the sooner and easier we may be able to ensure a soft-landing in a low carbon, post-fossil fuel world. Hopefully, it will still be a world where we have oil, but treat it carefully and do not use it in the wasteful, mindless way we do today.

This is a matter of evolutionary change that we are talking about. Isn’t evolution something to strive for?

Energy Descent from Peak Oil: Collapse or Evolution? by Brendan Barrett is licensed under a Creative Commons Attribution-NonCommercial-ShareAlike 3.0 Unported License.