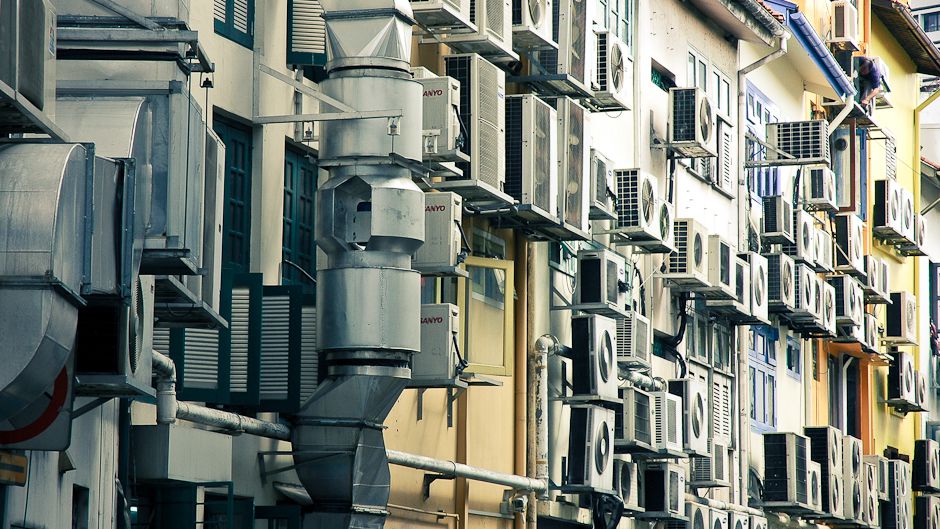 The facts and predictions about the environmental impacts of air conditioning are shocking. First of all, about 500 million metric tonnes of carbon dioxide per year result from air conditioning of buildings and cars.

Then there are other considerations:

Even if you think that scientist and author Stan Cox’s estimates on future air conditioning use could be a little alarmist, there is no doubt that the number of air conditioners across the planet will increase as wealth grows and as people’s willingness to pay for convenience and comfort increases.

More people moving to cities globally means more people living and/or working in stuffy interior spaces all day under the shade of concrete, instead of more traditional wooden houses or even trees. Bear in mind also that the difference in the Global South, as opposed to most developed countries, is that the “need” for cooling can be an economically and environmentally costly 12-months-a-year pursuit.

Just as refrigerators and washing machines have been, and continue to be, a mark of entrance to the global middle classes, so have air conditioners become a status symbol that signify that families, businesses and even government and non-government organizations have “made it”.

People often make sure to point out that “air conditioning is included”, whether it’s when selling a car, staying in a hotel or welcoming a guest to a home.

Those of us working in industrializing countries will be familiar with the normalization of air conditioning and the strange phenomenon, particularly in the tropics, of people said to be “used to the heat”, now enjoying frigid 16-degree temperatures all day long.

And there are other costs that are coming to light including increases in respiratory diseases among people who use air conditioning, whether in the United Arab Emirates or in your country. Have you noticed a link between your health and the amount of time you spend in front of an air conditioner?

The theme of air conditioning having moved from a luxury good to a status quo “necessity” was picked up recently by the Sydney Morning Herald. It reported that Australia, with a population of 22 million, has installed 1.7 million air conditioners in the past five years alone.

These and other examples of staggering growth are occurring in an era when we really should be reducing, not increasing our energy consumption, particularly in areas of our lives where it is easiest to do so (some use the expression “picking the low hanging fruit”) such as using more energy efficient lightbulbs.

Wade’s statement seems reasonable. But is he right? Have you questioned the rise of air conditioning in your life? Is it a need or just something some generations have become accustomed to?

In this Debate 2.0, we ask whether we can realistically continue to be fans of air conditioning, especially in light of the climate challenge that is affecting us all? Or should we be re-conditioned to using simple fans for instance, which are dramatically more energy efficient?

What other ways do you know of that can keep people cool while not warming the planet at the same time? (Here are some ideas to get you started.)