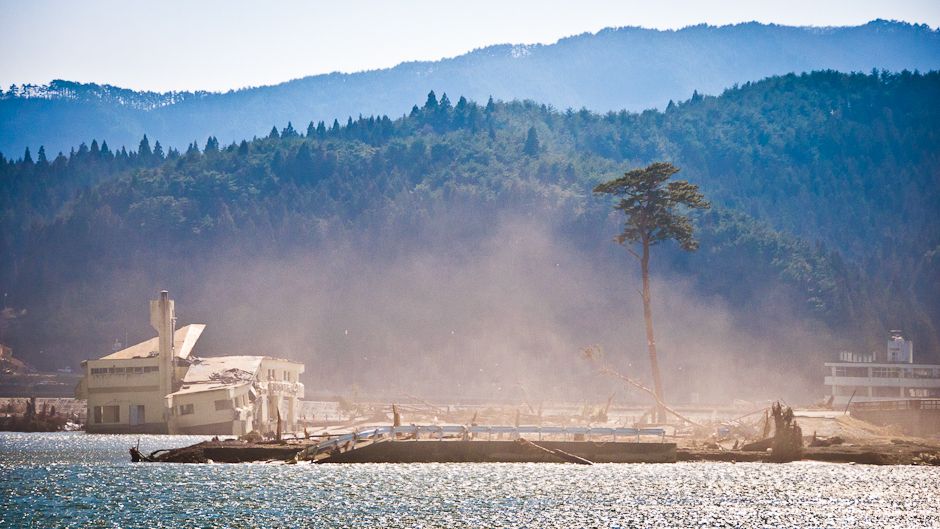 Victor Hugo once wrote that “Religion, society, nature: these are the three struggles of man. These three conflicts are, at the same time, his three needs”. The literature and history of countries around the world seem to provide plenty of evidence to back up Hugo’s words. But in Japan, where prevailing Shinto and Buddhist beliefs are inextricably tied to nature, and traditional society was shaped around harmonious human-nature activities in satoyama landscapes, these three factors seem to have grown together and may provide some explanation for the tremendous resilience that communities in Japan’s Tohoku region have shown in the wake of the Great East Japan Earthquake and Tsunami of 2011.

These are important and timely issues to consider, because resilience is a keyword these days — and rightfully so. It was peppered throughout the Rio+20 outcome document “The Future We Want”, was one of the four themes of last month’s International Forum for Sustainable Asia and the Pacific (ISAP2012) in Yokohama, Japan, and is at the core of the “Nature+” theme of next month’s IUCN World Conservation Congress in Korea.

But just as courage may only become apparent in dangerous situations, perhaps a system’s resilience cannot be observed until it faces some external stress.

There have, however, been some difficulties in describing, quantifying and communicating the concept of resilience. Technical definitions exist, and there is a range of specific descriptions of ecosystem resilience and even community resilience. It has even been claimed that the antonym of resilience is “vulnerability”, which may be easier to identify and measure. In this case, any factors that reduce vulnerability may automatically also be considered as increasing resilience.

But just as courage may only become apparent in dangerous situations, perhaps a system’s resilience cannot be observed until it faces some external stress. The scientific community is predicting that climate change will bring a whole host of increasingly unpredictable and extreme weather events that will soon be testing the resilience or uncovering the vulnerabilities of communities around the world.

Resilience in the face of disaster

On 11 March 2011, the largest earthquake in Japan’s recorded history hit the northeastern Tohoku region, causing a devastating tsunami and widespread destruction. The intense seismic activity in and around Japan is well-known, and extensive steps had been taken to mitigate this vulnerability. The sheer scale of the disaster, however, overwhelmed many of the infrastructural defenses, washing away whole communities and leaving thousands homeless.

In the days and weeks that followed, however, a growing number of heroic stories began to emerge from the region — stories of order in the face of chaos; compassion in the face of devastation; generosity in the face of loss. In short, the infrastructure was broken, ecosystems had been devastated, but the sense of community had remained intact.

At last month’s ISAP2012, a parallel session was held under the Forum’s resilience theme titled “The Satoyama Initiative  and Resilience — Pathways to a Sustainable Society”. During the session, a powerful presentation was given by Mr. Katsuhiko Tada. As President of Tada Organic Farm Company, located in Iwate Prefecture’s Tono City in the affected Tohoku region, Mr. Tada told attendees of how he saw cars bouncing up and down during the earthquake and experienced the tsunami’s devastation first-hand.

His first reflex in the aftermath of the disaster was to immediately share the food and resources of his farm and to mobilize the community. He organized volunteers from across Japan and overseas, and Tono City soon grew to be one of the biggest bases for volunteers on their way to help out in the region’s coastal towns. During the parallel session he screened a short slideshow video that documents some of these efforts.

Indeed, across the region, it seems like the first reflex of many people was to look after the people around them. For example, the tsunami washed completely over one of the Urato Islands off the coast of Miyagi, but not a single life was lost — even though many of the island’s residents were elderly — because everyone knows each other so well and the community worked together to evacuate in a timely manner. These same community bonds are now proving crucial to the area’s ongoing recovery process.

In both New Orleans and Japan’s Tohoku region, well-prepared defences were overwhelmed by natural disasters, but in one case community resilience triumphed, while in the other it seems to have largely collapsed.

Likewise, Kurihara City recorded the highest levels of seismic activity of any place in Japan on 11 March 2012. But building on past experience with earthquakes, the city had strengthened autonomous organizations within the local community, such as neighbourhood councils, or jichikai. This made it possible to minimize potential damage within the city and rapidly collect accurate information after the disaster, thereby enabling a quick and substantial response.

The mathematics of resilience

But what exactly is it that made Japanese communities so resilient in the face of these unprecedented disasters? Take, for example, the aftermath of Hurricane Katrina in New Orleans after the levees broke and a considerable portion of the city was submerged. According to some reports, one-third of the New Orleans police force left town and did not report for duty as the disaster struck. Widespread looting broke out across the city, extrajudicial shootings occurred and in the end the National Guard was deployed to bring order back to the city. There were undoubtedly shining examples of strength and community spirit (e.g., from the tightly knit Vietnamese Christian sub-community), but at some level the very foundations of order in the city were deeply shaken by the flooding.

In both New Orleans and Japan’s Tohoku region, well-prepared defences were overwhelmed by natural disasters, but in one case community resilience triumphed, while in the other it seems to have largely collapsed.

Maybe the multitude of cultural and community linkages existing across Tohoku have given the region its strength in facing this disaster. The isolating anonymity that characterizes many large cities, on the other hand, may be halting such bonds from forming. It might therefore be somewhat unfair to compare the largely rural Tohoku region to the urban centre of New Orleans, and this raises some concerns about how one of Japan’s urban centres would react if affected by a natural disaster of a similar scale.

Governments, NGOs, aid agencies, etc. all seem most comfortable when supporting projects based on a range of measurable indicators and targets. But can strength and leadership in the face of crisis, like that demonstrated by Mr. Tada and others throughout Tohoku, ever be quantified? What indicator, target or statistic can accurately reflect community resilience?

Rubbing away the rough edges

Returning for a moment to Japan’s religious foundations, there is a Buddhist saying (which seems to actually originate from Cambodian Buddhist thought) that people living together are like stones in a bag. Over time, the close contact rubs away the rough edges, leaving behind beautifully polished stones. Perhaps this can also be a metaphor for community resilience in which a group of individuals are constantly strengthening one another through their close interactions.

Thinking again of Mr. Tada’s slideshow of recovery efforts, it is perhaps no surprise that all of the photos show groups of people working together united by common purpose rather than solo efforts by individuals.

If there is an increase in extreme weather events as has been predicted by climate scientists, communities around the world will be increasingly vulnerable. The resilience demonstrated by communities in Japan’s Tohoku region may be one of the best modern-day lessons on what the rest of the world can do to prepare.

Sana Okayasu is an Associate Researcher with the Programme Management Office at the Institute for Global Environmental Strategies in Hayama, Japan.

Ikuko Matsumoto is an Associate Researcher with the Programme Management Office at the Institute for Global Environmental Strategies in Hayama, Japan.