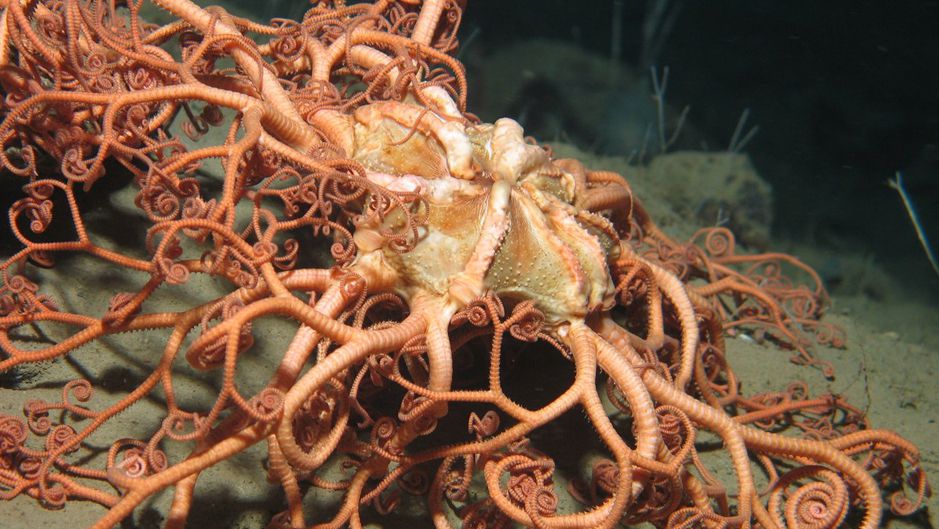 It is vast, dark, remote and much of it is inaccessible to humans, so it has received less attention than other environments. But the deep sea represents 98.5 percent of the volume of our planet that is hospitable to animals and has vital global functions including sequestration of carbon from the atmosphere.

However, as explained in a new review of over 200 scientific papers, the deep sea is facing impacts from climate change and, as resources are depleted elsewhere, humans are increasingly exploiting it for food, energy and metals like gold and silver.

Published today in Biogeosciences, a journal of the European Geosciences Union (EGU), the study clearly shows how the deep sea nurtures fish stocks, serves as a carbon sink and is a massive reserve of oil, gas, precious metals and the rare minerals we use in modern electronics and batteries.

Further, the international team of researchers explains, hydrothermal vents and other deep-sea environments host life forms like bacteria and sponges that are a source of new antibiotics and anti-cancer chemicals. It also has cultural value, with its mysterious species and untouched habitats inspiring myths, literature and popular films.

“Deep-sea’s worth should be recognized so that, as we decide how to use it more in the future, we do not inhibit or lose the services that it already provides,” says lead-author Andrew Thurber, a researcher at the College of Earth, Ocean and Atmospheric Sciences at Oregon State University in the United States.

“This is the time to discuss deep-sea stewardship before exploitation is too much farther underway.”

“The deep sea realm is so distant, but affects us in so many ways. That’s where the passion lies: to tell everyone what’s down there and that we still have a lot to explore,” says co-author Jeroen Ingels of Plymouth Marine Laboratory in the United Kingdom. The research was the result of a workshop at the International Research Institute of Stavanger in Norway, supported by INDEEP (the International Network for Scientific Investigations of Deep-Sea Ecosystems) through a grant awarded by the Total Foundation.

“We felt we had to do something,” says Ingels. “We all felt passionate about placing the deep sea in a relevant context and found that there was little out there aimed at explaining what the deep sea does for us to a broad audience that includes scientists, the non-specialists and ultimately the policymakers. There was a gap to be filled. So we said: ‘Let’s just make this happen’.” 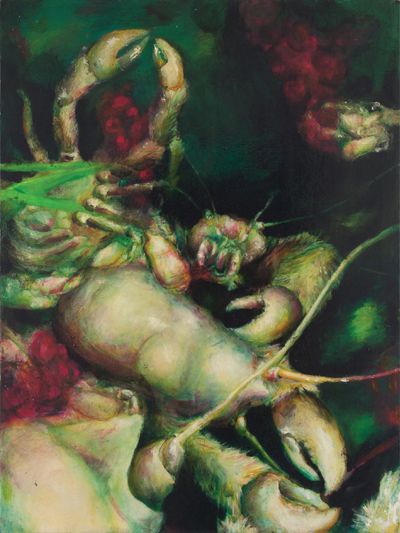 The deep sea has inspired art for centuries. The photographed painting above is by artist Lily Simonson, who uses deep-sea fauna as a muse for her paintings. Photo: Lily Simonson. Creative Commons BY-SA.

Scientists’ understanding of how the deep sea functions is still limited, the authors note, but they do know the deep ocean and seafloor are crucial to our lives through a diversity of supporting, provisioning, regulating and cultural services.

“We all felt passionate about placing the deep sea in a relevant context and found that there was little out there aimed at explaining what the deep sea does for us to a broad audience that includes scientists, the non-specialists and ultimately the policymakers.”

The next key service is the nutrient regeneration provided by all sizes of fauna that live here, which creates the elements necessary for fueling surface productivity and fisheries. Further, microbial processes detoxify a diversity of compounds.

Each of these processes occur on a very small scale, the researchers explain. But, considering the vast area over which they occur, they become important for the global functioning of the ocean.

“While many functions occur on the scale of microns to meters and timescales up to years, the derived services that result are only useful after centuries of integrated activity.”

Thurber gives other examples: manganese nodules, deep-sea sources of nickel, copper, cobalt and rare earth minerals, take centuries or longer to form and are not renewable. Likewise, slow-growing and long-lived species of fish and coral in the deep sea are more susceptible to overfishing. “This means that a different approach needs to be taken as we start harvesting the resources within it.”

“This study is one of the steps in making sure that the benefits of the deep sea are understood by those who are trying to, or beginning to, regulate its resources,” says Thurber. By highlighting the importance of the deep sea and identifying the traits that differentiate this environment from others, the researchers want to offer the tools for effective and sustainable management of this habitat.

The paper “Ecosystem function and services provided by the deep sea” is available online, free of charge.

Deep Sea Crucial to Our Lives, Study Shows by Carol Smith is licensed under a Creative Commons Attribution-NonCommercial-ShareAlike 4.0 International License.