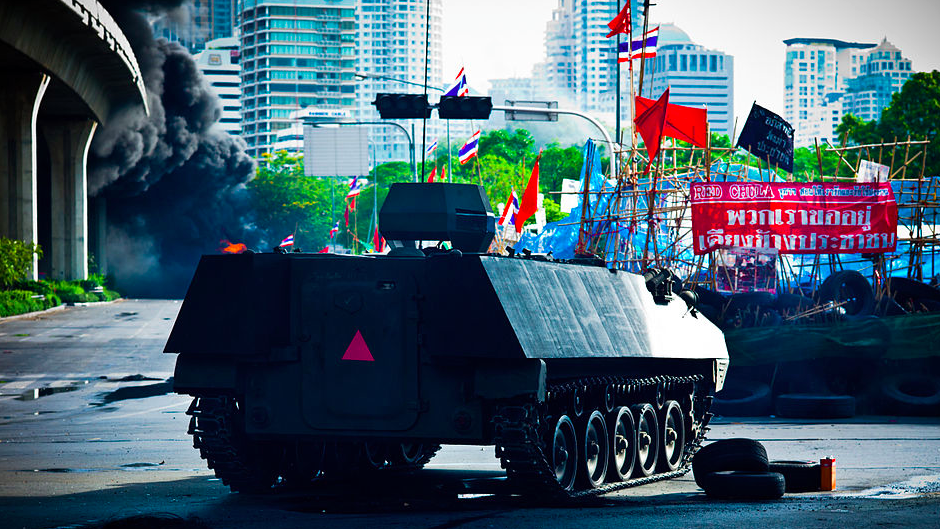 The al-Qaida attack at the World Trade Center in 2001 remains a powerful image of the vulnerability of democratic states to transnational terrorism. Recent mass demonstrations, including the anti-austerity protests in Greece in 2011 and the clashes between security forces, pro-government ‘red shirts’, and protesters in Thailand, also show that violence can be a feature of politics in democratic states. But are democracies really more prone to political violence than other political systems?

Democracies are at a disadvantage relative to non-democracies in two respects when it comes to countering political violence and insurgencies. First, they are accountable to a large citizenship. If terrorist activity succeeds in increasing the risk of death, it can create a widespread feeling of insecurity. Because democratic governments are expected to safeguard the lives and property of all of their citizens, they must respond in some way to this increased risk. At the same time, democracies are legitimate only to the extent that they protect individual freedoms and handle perpetrators through the legal system. Terrorism, then, may also undermine government support if authorities respond to threats too forcefully. Provoking such over-reactions may even be an aim of some terrorist groups.

Well-established democracies such as France or Japan, however, experience considerably less political violence than non-democracies. This is true for domestic terrorism as well as for internal armed conflicts and civil wars. The rare internal conflicts these democracies experience (such as the Basque conflict) tend to lead to fewer casualties, in part because democratic governments are typically more restrained in their use of violence against civilians.

Democratic governments may be at a disadvantage when it comes to countering insurgencies through force, but they also attract less violent opposition. Democratic institutions provide peaceful channels for resolving political conflict and a legally constrained government’s response to a protest is often seen as more legitimate. In such systems, a much smaller segment of the population has a strong motivation to engage in political violence.

Generally speaking, many forms of political violence are most likely to occur in political systems where repression is ‘incomplete’ — where opportunities to organize political violence exist and ineffective institutional channels provide the motivation for doing so. Because democracies rarely outlaw political groups, except for those (such as the Baader-Meinhof group in Germany in the 1970s) that use illegitimate methods, political violence in democracies tends to occur where institutional channels are ineffective. This is why non-state parties to armed conflict in democratic states (such as the IRA in Northern Ireland and the various separatist groups of North-East India) disproportionately seek territorial autonomy rather than to challenge the central government. In some cases, demands for autonomy are made by opportunistic actors with narrow objectives, such as the separatists in Eastern Ukraine. More often, however, these demands are rooted in real grievances that arise because centralized decision-making favors the national majority rather than the local one, as was initially the case with the confict in Sri Lanka.

Internal conflict also tends to be more frequent in low- and middle-income democracies than in high-income ones. While India, Sri Lanka, and Colombia have experienced long insurgencies, the industrialized democracies of Europe have largely been spared. This vulnerability can probably be explained by the combination, in low-income countries, of stronger incentives to use violence for political goals and characteristic deficiencies in democratic governance — including corruption, weaker legal systems, ineffective bureacracies and electoral irregularities.

Insurgencies and other forms of political violence also disproportionately occur in political systems that mix democratic and non-democratic features. Traditionally, these semi-democratic systems — such as South Africa under apartheid and Israel, as long as it retains control over the occupied Palestinian territories — have had well-functioning institutions from which a large part of the population was excluded. In another form of semi-democracy that is becoming more common, leaders and representatives are elected by a majority of the population but face few institutional constraints once in office. The presidents of many African countries rule with little interference from their parliaments or judiciaries, allowing them greater opportunities to reward their political base and enrich themselves. This makes the stakes of elections much higher, and the use of violence to gain office more attractive. The widespread violence surrounding several Kenyan elections, for example, clearly had a basis in such calculations.

If avoiding political violence and civil war were the only criterion for evaluating political systems, auhtoritarianism might be preferable to democracy. Most Chinese, for example, are far better off today than they were 40 years ago, and economic growth and poverty reduction have reduced the risk of violence.

Autocratic government, however, is a poor guarantee of poverty reduction. Although some democratic governments do choose policies that stifle growth, none can compete with the failures of China’s ‘great leap forward’ or the collapses of North Korea or Zimbabwe. Moreover, there is evidence that the tendency for socio-economic development to foster more peaceful interactions between societies is much stronger when their political institutions are democratic. As citizens become better educated and economies more reliant on financial and human capital, demands for popular influence tend to become louder and activists better placed to put real pressure on governments. In middle-income authoritarian systems conflict over the nature of the political system is the dominant motivation for political violence. This is because the repressive tactics that were once effective at silencing illiterate subsistence farmers are less effective against educated but unemployed urban youth.

Although autocratic repression may be effective in the short-run, it tends to increase discontent in the long-run. The most potent example of this is Syria. The brutal Hama massacre in 1982 and the Assad regime’s efficient security apparatus managed to stifle discontent for many years. The long-term shortcomings of these tactics, however, are now quite evident. The regime is still in power, but it has dramatically failed to guaranteed security for Syria’s people. Although Syria is a complex case, it is undeniable that the illegitimacy of Bashar al-Assad’s regime and its manner of handling protests played an important role in triggering the conflict.

The process of democratization is often violent. In order to eliminate political violence in the long-run, however, democratization is better than the temporary ‘peace of the zoo’ that authoritarian states can provide. Today’s established democracies are themselves outcomes of quite violent processes. The British ‘glorious revolution’ followed the wars of the early 17th century, and incidents of political violence continued long after — with several hundred protesters injured and some killed in the Peterloo massacre in 1819. French democracy began, of course, in the terror of the 1790s and witnessed repeated turmoil well into the 19th century. Even Scandinavia experienced political violence after democratization. Tense labor conflicts involving military troops killed some and injured many in Sweden and Norway in 1931. In most cases, however, this violence eventually gives way to non-violent politics — with violence typically bcoming less serious after a few elections have passed.

Democratization and Political Violence by Håvard Hegre is licensed under a Creative Commons Attribution-NonCommercial-NoDerivatives 4.0 International License.
Permissions beyond the scope of this license may be available at http://www.isn.ethz.ch.