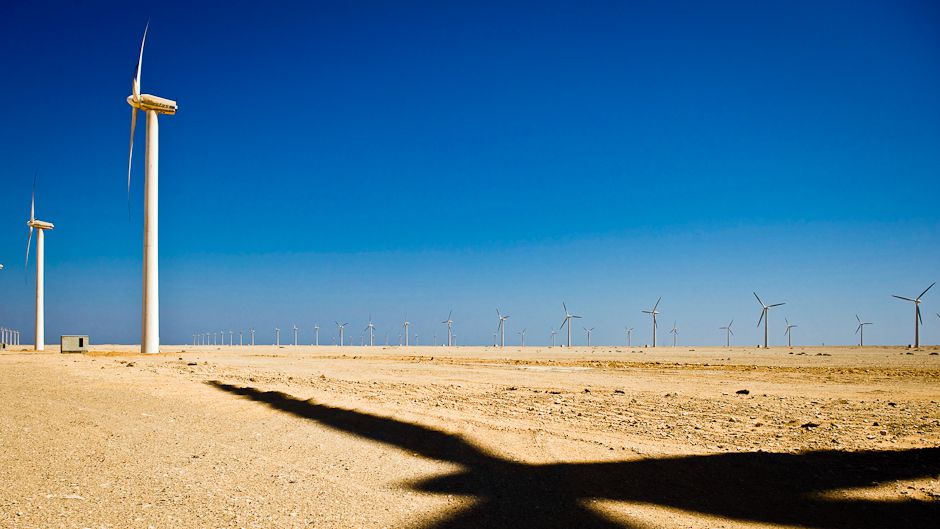 For the time being, Egypt’s future is uncertain. The political landscape is transforming and the nation is witnessing the dawn of a new era.

While the proverbial winds of change are blowing in Cairo, on the coasts of the Mediterranean and the Red Sea, the real wind is helping Egypt switch from fossil fuels to renewable energy. By the year 2020, the country expects to draw 20 percent of its electricity from solar and wind power.

It’s an ambitious target and its feasibility is possibly a moot point. Until now, the lion’s share of electricity used in Egypt is drawn from fossil fuels. With only limited resources of its own, this reliance takes its toll on the environment and the economy. But there are alternatives.

“The considerable potential for use of regenerative energies in northern Africa hasn’t even begun to be tapped,” said Andrea Boehling from Greenpeace. She cites the heavy investment required for solar and wind power plants as the main reason.

Nevertheless, a number of pilot projects are already up and running, such as the Zafarana Wind Farm near the Gulf of Suez which was co-financed by various European governments. The largest wind farm in Africa, it generates an annual 1400 gigawatt hours of electricity. The Red Sea coast is one of the best locations in the world for wind energy with a potential output of up to 20,000 megawatts — the equivalent power generated by 16 nuclear power stations.

Among the investors in the Zafarana Wind Farm is the German KfW development bank. “Further such projects are in the pipeline,” confirms Charis Poethig from the KfW. “A new wind farm is in the cards in Gabal el-Zeit. An agreement has already been signed with the government.”

In fact, the entire region of northern Africa is facing an energy rethink. The population is exploding, industrialization is progressing at a galloping pace – and energy consumption is soaring.

Each country is reacting differently: For example, Algeria has plentiful gas and oil reserves and government-subsidies keep keep prices low. But at high cost to the environment.

Morocco, on the other hand, is exemplary. In the past, like Egypt and Tunisia, it imported most of its electricity at great expense. In recent years this prompted the government to consider the alternatives. Now, thanks in part to European aid, it has successfully introduced a range of regenerative energy sources.

“We’ve helped finance wind farms in Essaouira and Tangier,” says Poethig from the KfW. The wind park in Essaouira opened in 2007 and now produces 210 gigawatt hours of electricity per year.

In the long run, Europe too stands to gain from this burgeoning industry. The DESERTEC Foundation was established in 2009 as a non-profit foundation with the aim of promoting clean power from deserts all over the world. One goal is to see 15 percent of Europe’s energy needs met by the year 2050 by energy generated by solar and wind farms in the Sahara.

“Almost all the technology is in place,” says Alexander Mohanty from the Desertec-Industry Initiative (Dii). “The next step is to establish the necessary political framework.”

Mohanty is quick to point out that the bulk of the electricity generated will remain in the country where it is produced. “The benefit to the producer countries is two-fold: they receive aid to develop the renewable energy sector and moreover jobs are created in a promising industry.”

For the time being, the Desertec concept is just a vision. But a flagship project in Morocco is in planning and is being eagerly awaited.

“The Desertec concept could solve the global energy problem,” says Boehling, but says that transmission lines between Africa and Europe first need to be extended – which she predicts will take around ten years.

Energy experts see the current turmoil in the region as an opportunity.

“A feasibility study in Tunisia is currently on hold,” says Mohanty from Dii. “But our assumption is that the unrest is only temporary and stable political systems will soon be up and running.”

Boehling is equally optimistic. “Many of the north African despots had ties to the oil industry and therefore opposed the development of the renewable energy sector,” she says.

The dust has yet to settle in northern Africa. When it does, the region’s future will hopefully be a green one.

Nele Jensch has worked for Deutsche Welle since 2007 as a photo editor and a reporter. Her articles have also been published in German newspaper Taz and magazine Freitag. In 2010, the 26-year-old joined the Deutsche Welle project “Global Ideas,” aiming to inform readers about developments in the field of climate change. In addition to her journalistic work, Nele Jensch studies cultural anthropology and communication science at the Free University in Berlin. She worked as an editor and author for German student online-magazine Polar for several years. Nele Jensch likes to travel, especially in South America. In 2010, she conducted an ethnographic study in Bolivia on “participative online-media in the context of national identity-building”.