Discovering the Wonders of the Coconut 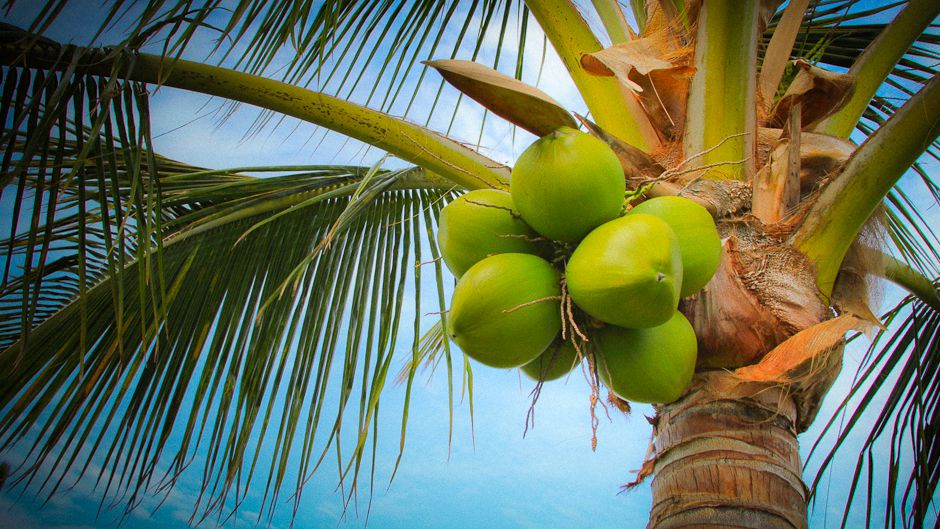 Coconuts offer a wide array of uses from agriculture, energy, construction to medicine. Though research on the fruit is still in its infancy, the versatile palm has been sustaining communities for thousands of years.

In the 1970s, Harry Wilson’s song “Coconut” extolling the wonders of the hairy fruit climbed the music charts in the United States. Just a little lime juice with the coconut and you feel better, went the tune. Now, the American beverage industry has re-discovered the benefits of the fibrous fruit. Coconut water has become a massively popular drink in the US and something of a darling of the natural foods world.   One of the biggest businesses in the industry is Vita Coco. The American company has more than quintupled its sales in the last few years. Faith in the coconut fruit has grown alongside the sales. Coconut milk is considered an effective way to lower blood pressure or cholesterol levels.

Coconut oil in the fight against cancer

Expectations and hopes for the coconut’s multi-faceted usage continue to grow. Naturopathic doctor and coconut expert Bruce Fife says the round, brown fruit has helped him make major advances in cancer research as well.

At his Coconut Research Center in the US state of Colorado, Fife is working on experiments with animals to find out how coconut oil can help guard against cancer. “The feed for all the animals with cancer was exactly the same — except for the oil added to it. We tried olive oil, sunflower oil, rapeseed oil, coconut oil and a few others. The cancer advanced in all the animals in the study except for the ones who were fed coconut oil,” said Fife.

The American Institute for Cancer Research (AICR) has warned against the hype surrounding coconut oil as a possible remedy to cancer. Thanks to its high selenium content, coconuts are rich in anti-oxidants, which slow the ageing process in human cells. But AICR reports that little can be said at this point on how effective coconuts really are in fighting cancer.

Still, coconut milk is an extremely healthy alternative as it contains high levels of potassium, vitamin c and magnesium. A bit of coconut water is far better than any sports drink, in fact. And because coconut water’s pH level is similar to human blood’s level and its salt content resembles that in human cells, it can even be used for infusions in emergencies.

On remote islands around the world, residents who do not have access to water sources often rely on coconut water instead to quench their thirst. Coconut palms grow along the tropical belt on the 26 degree latitude line, north and south. And in some 90 countries, more than 11 million farmers depend on coconuts for their livelihoods.

In the Philippines, coconut oil was until recently used solely for roasting and baking. Now, it’s used to produce vast quantities of biodiesel.

Romulo Arancon, executive director of the Asian and Pacific Coconut Community, says using coconuts to produce fuel cuts down on the high cost of importing fossil fuels. “Using coconut oil instead of diesel will make countries more and more independent. Now we’re trying to increase the coconut harvest without destroying the environment. It’s important that making biodiesel does not compete with food plants,” said Arancon.

The eco-friendly fuel is not only cheaper but also releases a minimal amount of CO2. Plus, coconut-based diesel oil is also said to smell much better than the traditional variety.

Embedded at the top of this page is a Deutsche Welle video (by Kerstin Schweizer) showcasing a project that is an example of using plant waste to protect the climate.

Nature provides us with the a variety of natural resources to spur innovation, and all right at our doorstep: sugar cane remnants are saved from the trash heap and turned into eco-friendly plastic, bamboo becomes an ideal building material because it re-grows faster than any tree, and coconut is a multi-purpose star, used for everything from medicine to green fuel. All it takes is a little imagination and inspiration. Across the world, people are protecting the environment by using resources in a smart and eco-friendly way.

In Cambodia, traditional coal is being replaced by eco-friendly briquettes made from coconut shells.

The outer shell of the humble coconut has the power to save Cambodia’s forests. Wood remains the main energy source in the country as a result of which the country’s virgin forestland is rapidly disappearing. In the last 40 years, forest cover has shrunk from 70 percent to just 3 percent. Coconut shells can be used as a material to produce briquettes, and no trees have to be felled to access them, either. In addition, they’re cheap and burn longer than wood.

Coconut shell briquettes are still in the early phase of development, and the product remains largely unknown. That’s why students are driving through the streets of the capital, Phnom Penh, in rickshaws to get out the word. They introduce the coconut shell briquettes to homes and businesses, like restaurants. And the interest in their product is high — the use of briquettes has quintupled since they started.

Everything is put to use

And it’s not only the inside of the fruit that’s useful. Almost every part of the coconut palm finds use in. The stems and leaves can be turned into building materials for constructing homes, ships and furniture. The hard shell is a valuable material in creating fuel, and the fruit’s husk and fibres serve as a useful insulation material in eco-friendly houses.

Even the waste left behind after a coconut harvest has great potential: one German company called “Coir Project” turned the remnants into a coco substrate, where fruits and vegetables can grow without needing soil.

“In Sri Lanka, coconut palms were mainly used for producing coconut milk and pulp. But when you process the fruit and the shell further into substrate, you complete the circle,” said Klinge.

The coconut palm has been an important source of nourishment and a vital building material for more than 3,000 years. And it appears the amazing plant will be just as important in the future.

There’s only one downside between the usually harmonious relationship between man and coconut: according to a study by the University of Florida, around 150 people die every year after being hit by falling coconuts. That’s 15 times as many deaths as by shark attacks.

This article and video appear courtesy of Our World 2.0 cooperation partner Deutsche Welle Global Ideas. In more than 100 fascinating features, DW-TV, Germany’s international broadcaster, showcases people and projects whose innovative ideas are helping combat global warming in developing and newly industrialized countries — from Thailand to Honduras, Jordan, India and Laos. A multinational team of authors, researchers, TV and online reporters is working on a multi-media presentation of the projects, which are supported by the German environment ministry as part of the International Climate Initiative.

Wiebke Feuersenger studied German literature and African studies. She worked as an assistant producer at a theater and was a creative writing scholar at the “Young Artists Festival Bayreuth”. Since 2010, Wiebke has been a producer and reporter for Global 3000, a TV program on globalization issues by Deutsche Welle, Germany’s international broadcaster.