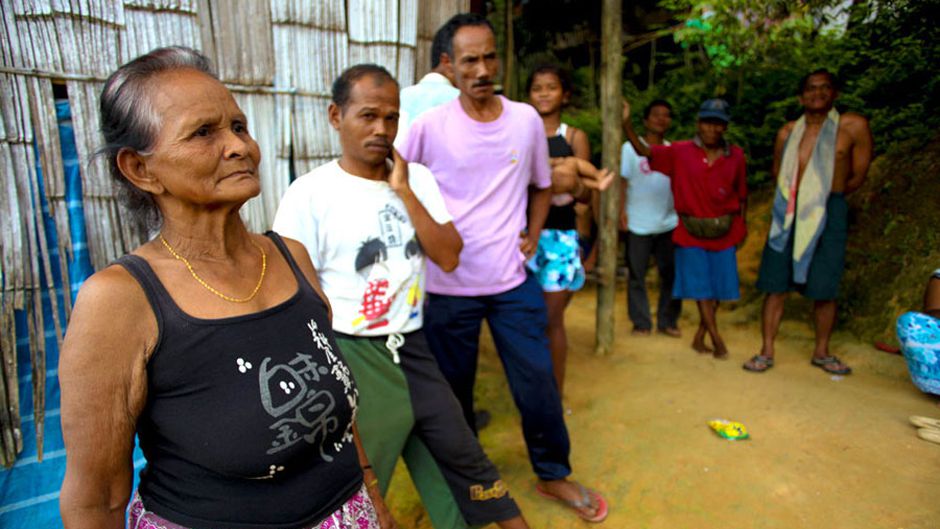 Vast amounts of the rainforest that once covered Peninsular Malaysia have been cut or burnt down for commercial purposes. The country is the world’s second highest producer of palm oil, following Indonesia, and also a major global trader in the timber and rubber industries. Driving across the country one is confronted with a distressing sight — the destruction of a once beautiful landscape.

Many Orang Asli, the indigenous peoples of Malaysia who make their homes within the forest, have been relocated to make way for development and continue to pursue a long and constant battle for land rights. They are resettled in rural and semi-rural locations, or placed on the outskirts of larger cities, where they are encouraged to integrate into mainstream society, often unprepared for the difficulties in doing so. 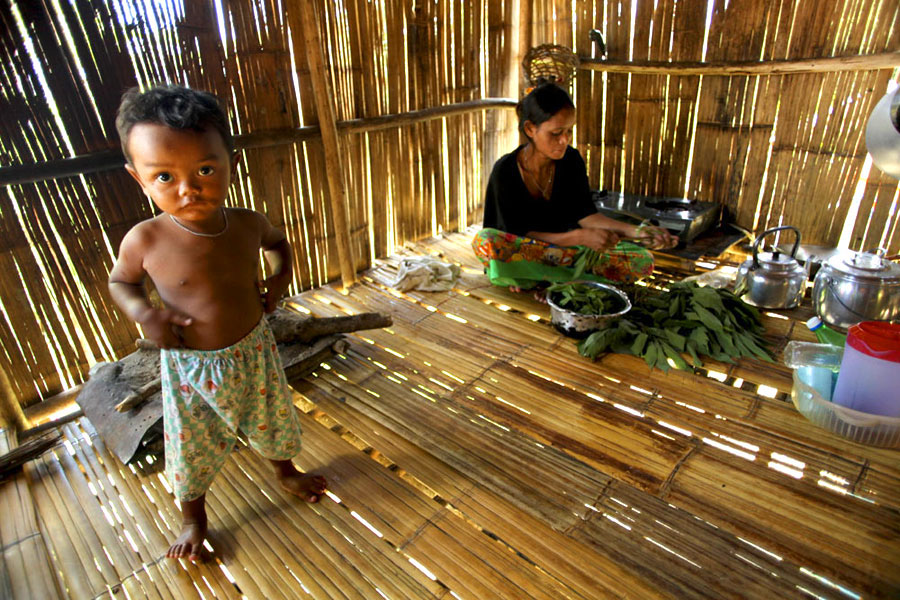 A mother prepares fresh food from the orchards for her family on a simple cooking stove. The destruction of surrounding primary forest means the diversity of available food stocks is gradually becoming more limited. Photograph © Bea Yates 2011 – All rights reserved.

Orang Asli — which in the Malaysian language means the Original or First Peoples — are, as the term denotes, those “whose ancestors inhabited the Malay Peninsula before the establishment of the Malay sultanates”, according to the Encyclopaedia Malaysiana. Though now grouped together by this term for the nation’s aboriginal peoples, they did not see themselves as a homogeneous group. The early Orang Asli, living in remote communities, instead identified themselves “by their specific ecological niche, which they called their customary or traditional land, and with which they developed a close affinity. Much of the basis of their culture and spirituality was derived from this close association with the particular environment that they regarded as theirs”.

But much has changed in the world since then and the Orang Asli have had change thrust upon them.

The community is being relocated from traditional wooden houses to government supplied concrete block structures, around 6 km away by foot.

One particular community in the state of Perak, documented in these photographs, is in the process of being relocated from traditional wooden houses to government supplied concrete block structures, around 6 km away by foot. They were moved to the current village (but soon to be former) site after their original nearby land was used to build a non-Orang Asli village, and make way for commercial plantations. According to the villagers, they have not benefited from the arrival of these plantations and factories, as the companies do not employ Orang Asli workers. Discrimination against them is practised throughout society.

They were also still saddened that their original ancestral land, home to the graves of their ancestors, had been previously developed. In the summer of 2010 when I visited the site shown here, only one or two families had moved over to the concrete houses in the new location (also a part of their ancestral land) and many of the remaining villagers voiced their opposition to the relocation, saying that they would fight to stay where they were.

Now, almost a year later, the village is split in two, with most but not all of the families settled in the new, third, location. For the village to be reunited and to function together as a community, they will have to wait for the rest of the new accommodation to be built.

The villagers have now been led to believe that the site they are moving from, and its orchards, will be kept for their own use (instead of being developed for commercial purposes), and planted with oil palm and rubber trees to support the community. As a result of this, local NGO project workers say that the majority are now positive about the move, but uncertain as to when it will be completed. Given the slow rate at which these government houses are being built, other necessities such as clean water supply, electricity, and an accessible road to enter the new village, could all take some time. The community may have to rely on NGOs to provide these facilities, until the local authorities deliver.

This village, and the Orang Asli in general, are relatively aware of their rights. Having already been subjected to relocation in the past (like many of the country’s Orang Asli), they have said that if any encroachment onto their land occurs, then they will resist.

Countless villages have been displaced due to development and have not received the benefits and compensation they were promised. Land proclaimed as gazetted for the indigenous communities can quickly have that status removed, if its inhabitants are viewed as standing in the way of progress and financial benefit. 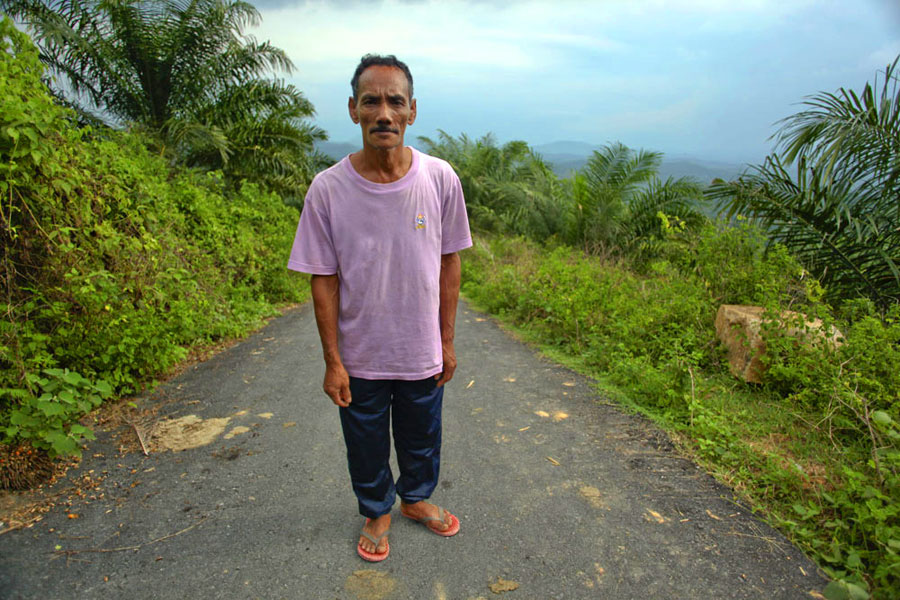 An Orang Asli man stands on the incomplete road that leads to the current village through surrounding palm oil plantations, with the site of his community s previous village somewhere in the background. Photograph © Bea Yates 2011 – All rights reserved.

The track record for supporting the Orang Asli is historically unsatisfactory, and only time will tell where the future lies for these villagers. In the meantime, they and the others that support them remain committed, hopeful, and eager for change and improvements in their rights. The close proximity of the new site allows the villagers more confidence and control in their claim to the old land, as does their determination to fight for it and a supportive network of NGO workers to advise them.

The world’s indigenous peoples sit precariously between Mother Nature and business, and are mostly without a voice that is heeded. Their vulnerability to the actions of others makes it vital for us as consumers to demand ethical products and business models from the companies and agencies with interests in their fertile lands. If these codes of conduct are not implemented and adhered to, it is at the loss of both the Orang Asli and the biodiversity of the Malaysian rainforest, and eventually of the greater planet.

The threats that the Orang Asli face are complex and certainly not limited to those they face from big business and the state, with the growth in commercialism changing their lifestyle and the rainforest around them. Many Orang Asli are now willingly involved in the illegal wildlife trade, or voluntarily converting their forested land into cash crops. General local and global developments have integrated them into a cash economy, and so involvement in the aforementioned trades is often seen as the best way to escape poverty.

Through this union with mainstream society, the Orang Asli are themselves repeating what others have done before them, using their land to their own financial advantage and moving further away from their traditional culture and beliefs. As a result of this modernisation within their indigenous communities, we are left to establish how to improve their human rights whilst protecting them and the forest from the negative aspects of consumer culture.

Though the text of this article is licensed under Creative Commons BY-NC-SA 3.0, please note that the photographs are © Bea Yates 2011 – All rights reserved.

Bea Yates is a freelance British photographer with a particular focus on human rights and social/environmental issues affecting minority groups across the world. She graduated with a degree in fine art photography from London Metropolitan University in 2008 and has since been working with a number of NGOs and newspaper agencies. She has worked on commissions and collaborations with various NGOs including Kurdish Human Rights Project, Afghan Association UK, Refugee Week UK, UNHCR, and Malaysian Care, along with many grassroots organisations in Asia for ethnic refugee groups from Burma. A former Magnum Photos intern and a close member of the Foto8 and Host Gallery team, she is now based in London concentrating on a number of UK based personal projects.