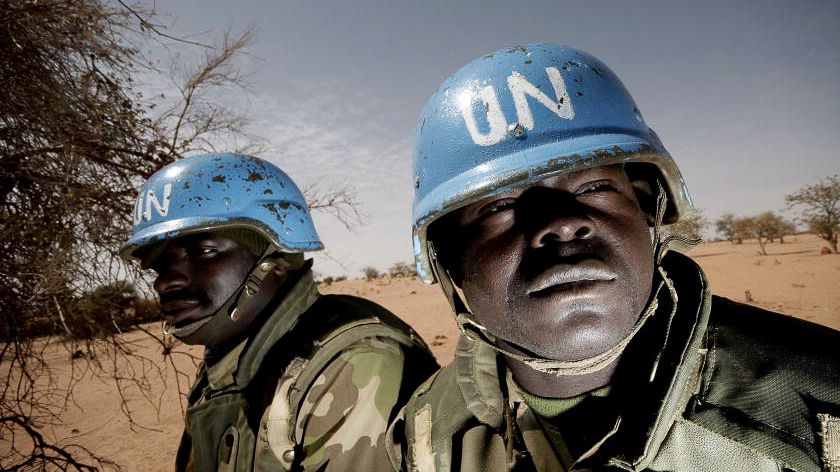 Does climate change cause conflict? It really depends on who you ask.

Warming increases the risk of civil war in Africa is the title of a new research paper tabled in the Proceedings of the United States National Academy of Sciences. The report claims that temperature rises in Africa have coincided with significant increases in the likelihood of war.

But not everyone agrees that there is a direct link between climate change and increased conflict, in an ongoing academic debate that goes all the way to the top of the United Nations.

Increases in the risk of civil war

In 2007, UN Secretary General Ban Ki-moon described the conflict in Sudan’s Darfur region as the world’s first climate change conflict. The assumption was that water scarcity from changed rainfall patterns resulting from climate change contributed to this conflict. His thinking reflects findings to date that the incidence of conflict is likely to be higher in years of lower precipitation.

This week, researchers Marshall B. Burke and his colleagues from several American universities have published what they say is “the first comprehensive examination of the potential impact of global climate change on armed conflict in sub-Saharan Africa”.

From a regression analysis of historical data, the authors find that there is a relationship between past internal conflict in sub-Saharan Africa and variations in temperature (but not precipitation) and that there are “substantial increases in conflict during warmer years”.

In numerical terms, a 1% increase in temperature leads to a 4.5% increase in civil war in the same year and a 0.9% increase in the following year. By the year 2030, based on averaged data from the 18 climate models used, this will translate to approximately a 54% increase in armed conflict incidence in the region.

The researchers argue that conflict will derive from economic uncertainties resulting from temperature-related yield declines in societies heavily dependent upon agriculture. This is because research to date has found that “economic welfare is the single factor most consistently associated with conflict incidence”.

The debate heats up

Much of the doubt about the relationship between climate change and conflict results from the inherent complexities of war and peace. With so many political, social, economic and environmental factors playing a role in either preventing or stimulating conflict, applying quantitative analysis and then trying to predict the chance of future conflict is problematic.

Dr. Vesselin Popovski, Senior Academic Programme Officer and head of the United Nations University Institute of Sustainability and Peace’s Peace and Security Section, argues that there is an indirect link between climate change and conflict.

“There is no doubt that impoverishment and human insecurity may arise as a result of climate change, if preventive measures are not undertaken. However, there is missing evidence that global warming directly increases conflict.”

Popovski cites a prominent study by scholars from the International Peace Research Institute, Oslo that claims that “the causal chains suggested in the literature have so far rarely been substantiated with reliable evidence”.

“The causes of conflict are primarily political and economic, not climatic. Warlords — who foster conflict — may exploit draught, flooding, starvation, agricultural or natural disasters in their strategies, like they did in Somalia and Darfur. But what will drive their fight is not the rain, the temperature, or the sea level — they will always fight for the same goals of power, territory, money, revenge, etc.”

Popovski questions the idea that increased resource scarcity always leads to conflict. He suggests that scarcity of water or other critical resources might do the opposite, encourage cooperation, as it has done in the Lake Chad or Nile Basins.

“When people face climate dangers or scarcity, they may decide to fight, but similarly they may decide to co-operate. If we take the 2004 tsunami in Southeast Asia for example, what it produced was more cooperation among states and peace in Aceh.”

So, what about the suggestion that climate changes will force people to move to less arid or drought prone areas already inhabited by other people, as is predicted in the Horn of Africa, for example?

“It has always been the case that people have moved to places where they can enjoy better livelihoods, either as a result of human or naturally induced pressures. We need to be prepared to meet the challenges of human migration and dislocation, be they produced by civil wars or climate change. Operationally there is not much of a difference — UN humanitarian agencies need to offer people on the move the same elements for survival and safety:  food, shelter, medicines, trauma relief, etc.”

The importance of being cautious

Climate change is increasingly being talked about as a threat to US national security. In the popular media we are warned about “food shortages, water crises and catastrophic flooding” in “vulnerable regions” demanding “an American humanitarian relief or military response”. The military strategists in the Pentagon are certainly taking the idea of climate wars seriously.

As Bradford Plummer cautions in The New Republic, the “security argument” is often employed, without solid analysis and evidence, as a means to convince people about climate change.

At a time when the risk of inaction is growing, fueled by the influence of climate sceptics with increasingly audacious tactics, it is critical that those researching the potential impacts of climate change upon conflict are more careful than ever.

The authors of this most recent paper agree that further research is required to fully understand the relationship between climate change and conflict. The evidence, like that which has been assembled in establishing the case that humans have induced climate change, will probably take many years to compile and require the cooperation of the best experts across a range of disciplines.

“What I would like to see is the five top natural scientists and the five top political scientists together in the same room being asked the same question: how do we develop good governance and reduce both conflict and climate disasters?” says Popovski.

“However, when addressing the root causes of human suffering, it would be better not to confuse armed conflict and climate change. The causes of armed conflict are different from the causes of climate change and need to be accordingly addressed. The consequences of the two could be similar, as many correctly point out — dislocated people — and helping war refugees and climate refugees can and should employ the same management techniques.”

“With the added bonus of knowing about temperature changes in advance, the world has much more time to anticipate future conflicts, deal in preventive diplomacy and develop strategies for good governance.”

Does Climate Change Cause Conflict? by Mark Notaras is licensed under a Creative Commons Attribution-NonCommercial-ShareAlike 3.0 Unported License.