Driving Home the Link Between Gender and Climate Change 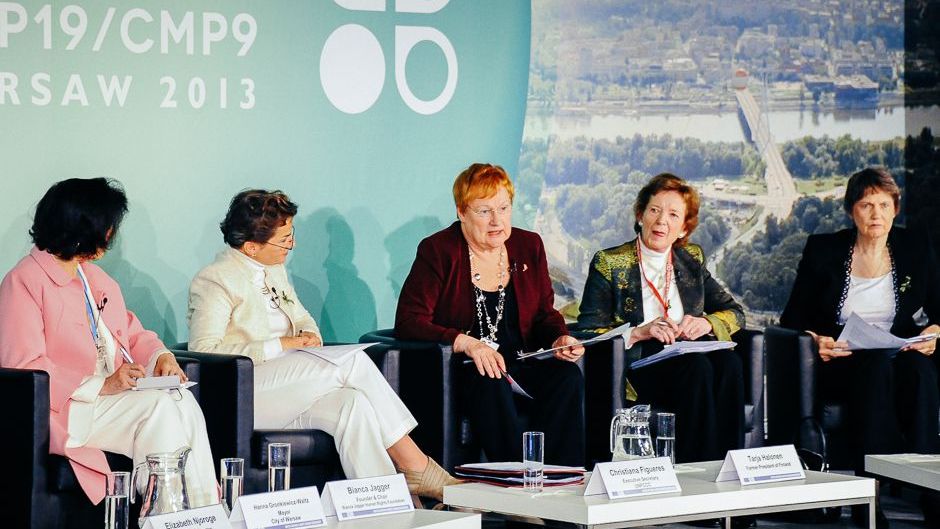 Tuesday was Gender Day at the COP19 climate summit in Warsaw, and many of the events that took place in the National Stadium focused on the topic of gender and its relation with climate change, and tried to shed a light on problems that require action from policymakers.

The day opened with the launch of the Environmental Gender Index (EGI), a project of the International Union for Conservation of Nature (IUCN). Lorena Aguilar, IUCN senior gender adviser, explained it to IPS:

“The EGI is the first index of its kind, bringing together measurements of gender and environmental governance; 72 countries have been rated for six different variables, with each one of its indicators,” Aguilar said at the COP19 United Nations Climate Change Conference running 11-22 November in the Polish capital.

The 72 countries were ranked according to their performance in livelihood, gender rights and participation, governance, gender education and assets, ecosystem and country-reported activities. Each of the variables contains a set of indicators to better define their scope.

For example, the ‘gender rights and participation’ variable looks at whether women enjoy equal legal rights, property rights and balanced representation in the decision-making processes.

The first outcome of this extensive research that should be stressed is that in many cases the highest-income group of countries — the 34-member Organisation for Economic Cooperation and Development (OECD) — recorded rather poor performances in reporting about gender, environment and sustainable development.

This might be due to the “perception that gender equality has already been achieved throughout all spheres in the country, including the environmental sector,” but also to a lack of political will, the report observes.

The top three performers in country-reporting to the Rio Conventions on biodiversity, climate change and desertification and the Convention for the Elimination of All Forms of Discrimination Against Women (CEDAW) are India, Kenya and Ghana, while “at the lower end of the scores, Georgia, Uzbekistan and Italy do not address gender in any of their latest three Rio Convention reports,” the IUCN study says.

Yet, poverty still goes hand in hand with gender inequality, when it comes to environmental issues as well. This translates into an index that sees the first positions all occupied by OECD countries, with Iceland, Netherlands and Norway in the top three, and Italy closing the list in the 16th position.

Latin American and Caribbean countries appear in the middle of the ranking, with the exception of Panama being among the strongest performers, right after Italy and followed by South Africa. Eurasian countries are also all ranked as moderate performers, with the best being Romania in the 22nd position and the last Uzbekistan in the 39th.

The list of weakest performers is occupied mainly by MENA (Middle East and North Africa) countries, with Yemen second to last in the overall ranking; Asian countries, among which India ranks 46th and Pakistan last of the continent in 67th position; and African countries, which account for most of the weakest performers, closing the table with the Democratic Republic of Congo as the worst performer of the sample.

Gaps are widest among the poorest

Gender advocates here at the COP also seem to confirm what the ranking shows. It is in the poorest countries that climate change effects have the most different impacts on men and women.

“Because of the socially constructed roles, women in Uganda are culturally required to provide food, cultivate food, prepare it and serve it to their families,” explains Gertrude Kenyangi from Support for Women in Agriculture and Environment (SWAGEN) in Uganda.

“Food, energy and water are interconnected, and if you don’t have these three things, which are made even scarcer by climate change, then you won’t be able to fulfil your role, and that alone will create problems between you and your husband, it will probably make your children destitute, and it will affect your entire livelihood.”

Kenyangi escaped that same fate thanks to an educational programme.

“I myself come from a forest-dependent community, but I broke out of that cycle. I happened to be connected with some religious organisations that sponsored my education.” And this is how, after her studies, she founded SWAGEN, a network of grassroots women community-based organisations.

Grassroots movements are paramount to connecting vulnerable people to the governance level, “but you need to make a deliberate effort to reach out to them,” Kenyangi told IPS.

“For instance, Women in Europe for a Common Future (WECF) is a platform that brought me into the debate, so I can bring in the grassroots dimension. Without their support I wouldn’t have the money to come on my own, I couldn’t afford the ticket, the accommodation, not even the registration to this event.

“That’s what changes the vicious cycle — if somebody intervenes from the outside, appreciating that we are all living on this planet and have just one planet,” she said.

Despite the name, WECF’s reach goes way beyond Europe, connecting more than 150 organisations and communities all over the world with the aim of influencing gender-sensitive environmental policies at the international level.

Because women and men often have different lifestyles, their activities have a different impact on the environment and vice-versa.

What they want to remind policymakers of is that climate change is caused by life’s day-to-day decisions and has an impact on everybody’s daily life. But because women and men often have different lifestyles, their activities have a different impact on the environment.

While from a Western point of view it might be hard to imagine how climate change effects can have a different impact on men and women, in many parts of the world, such as areas where subsistence farming is carried out by women, the relationship becomes clearer.

Women’s involvement at all decision-making levels seems to be, if not a solution, at least a first essential step to addressing these policy gaps.

Maira Zahur is part of the GenderCC delegation here at the COP, but back home she works on the policy level with the Pakistani government as an expert on disaster risk reduction.

“In simple terms, I advise them on how to use certain policies on the ground, how they can benefit women, how they should be revised, edited or extended, and how they can be taken to the grassroots level, explaining to people what things are there for their benefit,” she told IPS.

Women’s involvement at all decision-making levels seems to be, if not a solution, at least a first essential step to addressing these policy gaps.

Recently, UN Women carried out a study on flood early warning systems in Pakistan, looking at different aspects, such as the social composition in the different areas, whether men are based in such areas or are working outside, how women make decisions if there are no men in the home, whether they are able to make their own choices in case of a flood warning or are dependent on males in the home or in the streets.

The study reported that “hesitation about taking women and girls out of the protected environment of homes” was one of the reasons for people not to leave their houses even when they had been warned in advance.

“That’s why when you make policies such as early warnings, you need to take into account gender issues,” Zahur underlined.

The attention towards gender-related issues within the climate change debate is growing, as shown by the decision adopted at last year’s climate summit in Doha to promote gender balance and participation by women in the UNFCCC negotiations, as well as by the big turnout at the Workshop on Gender and Climate Change held here on Tuesday 12 Nov.

Yet Zahur seems sceptical about possible advances during the conference. “We are all so involved in plenaries, contact groups, side events, that the basic purpose for which we are here is kind of lost. We need to find solutions that can help people at the grassroots level. That should be the major motivation. But here a lot of blah blah blah is happening, this is so tedious,” she sadly concluded.

Guardians of Life and of Earth