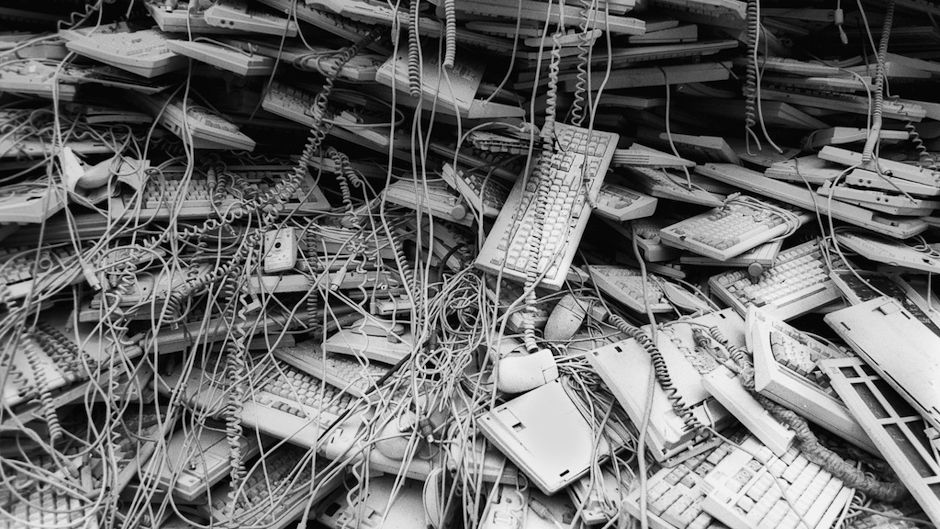 E-waste is a term used to cover almost all types of electrical and electronic equipment that has or could enter the waste stream. It can apply to televisions, computers, mobile phones, ‘white goods’ such as fridges, home entertainment and stereo systems, toys, toasters, kettles. Essentially, it includes almost any household or business item with circuitry or electrical components, with power or battery supply.

Globally, e-waste is growing exponentially simply because the market for such products is booming as many parts of the world cross the so-called ‘digital divide’. For example, between 2000 and 2005, the Organisation of Economic and Cooperative Development noted a 22% growth in Information Communication Technology (ICT) in China.

Furthermore, China was the 6th largest ICT market in 2006, after the United States, Japan, Germany, United Kingdom and France. This is astounding when one considers that in 1998, under 1% of China’s population owned a computer (calculated based on population statistics from UN Data).

Computers are only one part of the e-waste stream however. For example, in the European Union in 2005, large household appliances accounted for 44% of total e-waste, according to the United Nations University study supporting the 2008 Review of the Waste Electrical and Electronic Equipment (WEEE) Directive (the EU legislation on collection, recycling and recovery of electrical goods).

Rapid product innovation and replacement, especially in ICT and office equipment, combined with the migration from analogue to digital technologies and to flat-screen TVs and monitors, for example, are fuelling the increase. Economies of scale have led to lower prices for many electrical goods, which has increased global demand for many products that eventually end up as e-waste.

Electrical waste contains hazardous but also valuable and scarce materials. Up to 60 elements from the Periodic Table of the Elements can be found in complex electronics.

To use the home computer as an example — a normal Cathode Ray Tube (CRT) computer monitor contains many valuable but also many toxic substances. One of these toxic substances, cadmium, is used in rechargeable computer batteries and contacts and switches in older CRT monitors. Cadmium, reports Greenpeace International, can bio-accumulate in the environment and is extremely toxic to humans, in particular kidneys and bones. Mercury — used in lighting devices within flat screen displays — can cause damage to the nervous system, kidney and brain, and can be passed on through breast milk.

Lead plays an important role in the overall metal production processes. Hence, attempts to design-out lead from electrical and electronic equipment does not necessarily mean that it is no longer used. Even the lead-free solder elements are co-produced with lead. This illustrates the necessary holistic view to be taken in analyzing the e-waste situation and working out possible solutions.

Unfortunately the use of the these specialized methods is rare, with much of the world’s e-waste traveling great distances, mostly to developing countries. A recent study commissioned by the German Environment Agency estimates that 155,000 tonnes are illegally shipped out of Germany by declaring wastes as reusable.

In order to extract precious materials or recycle parts for further use this waste is finally processed in the majority of cases by crude “backyard” techniques, such as applying acid baths to obtain gold or burning wires to remove insulation and get at the copper. This emits dioxins and other pollutants and poses a danger to poorly protected workers and their local natural environment.

Moreover, these techniques are very inefficient in terms of resource recovery. Recycling usually focuses on a few valuable elements like gold and copper (often with poor recycling yields), while most other metals are discarded and inevitably lost. So resource efficiency is another important dimension in the e-waste discussion besides ecological, human security, economical and social aspects.

Because so much of the planet’s e-waste is unaccounted for, it is difficult to know exactly how much e-waste there is. Moreover the number of types of e-waste included in government-initiated analyses and collection programs differs across the world.

Nevertheless reasonable estimates for the amount of global e-waste are in the order of 40 million tonnes annually — enough to fill a line of dump-trucks stretching half way around the globe. The recent review of the WEEE Directive (European legislation on e-waste) highlighted that in Europe alone in 2005, there were between 8.3 and 9.1 million tons of e-waste, and an overall rising trend.

In Australia, with an average of 22 electrical items per household, the Australian Bureau of Statistics has estimated that in the next 2 years, most of the 9 million computers, 5 million printers and 2 million scanners in Australian homes will be replaced. In the US, the Environmental Protection Agency (EPA) has reported that the US generated 1.9 to 2.2 million tons of e-waste in 2005, with only 12.5% collected for recycling.

Where is the waste?

The WEEE Directive review by the UNU found that 25% of the total weight of the EU’s e-waste in 2005 was unaccounted for. Astoundingly, that means there was no scientific data available to explain where over 6 million tonnes of e-waste is going each year.

The US EPA has estimated a 5 to 10% increase in the generation of e-waste each year globally, yet alarmingly only 5% of the total global amount of 40 million tonnes is being recovered.  So where are the other 38 million tonnes?

Why is so much e-waste unaccounted for? We don’t really know for sure. Enough is known to suggest a few explanations, such as illegal trade to developing countries like China and India, domestic ‘informal’ processing centers as well as the e-waste that remains in the sheds, attics and storage rooms of sentimental owners.

Overall, we can definitely see that e-waste is a worldwide concern because of the nature of production and disposal of waste in a globalized world.

We can also see that, even though it is difficult to know exactly how much e-waste there is, we do know that large amounts end up in places where processing occurs at a very rudimentary level. This raises concerns about resource efficiency and also the immediate concerns of the dangers to humans and the environment.

There is a long and sometimes complicated chain of events in the e-waste problem, beginning from the idea that someone has for a new product and then to its production, its purchase and on to the eventual disposal by the end user. Only by engaging with various stakeholders and relevant scientific wisdom within this chain, will we begin to Solve the E-waste Problem (StEP).

StEP is an initiative of various UN organizations that work with prominent members from industry, governments, international organizations, NGOs and the science sector to initiate and facilitate approaches towards the sustainable handling of e-waste. Through five Task Forces, feasible, just and environmentally safe solutions for the e-waste problem are being developed through analysis, planning and pilot projects.

The photo essay and the captions that accompany this article were written by Stefan Irvine and are copyright reserved, whereas the article itself is authored by Ruediger Kuehr and is CC licensed as noted below.

E-waste: Not Your Normal Trash by Ruediger Kuehr is licensed under a Creative Commons Attribution-NonCommercial-ShareAlike 3.0 Unported License.

Ruediger Kuehr is Head of the United Nations University’s Sustainable Cycles Program (SCYCLES), which focuses on sustainable production, consumption and disposal. He is also Executive Secretary of the Solving the E-Waste Problem (StEP) Initiative, which develops environmentally safe solutions to the global e-waste problem through analysis, planning and pilot-projects.