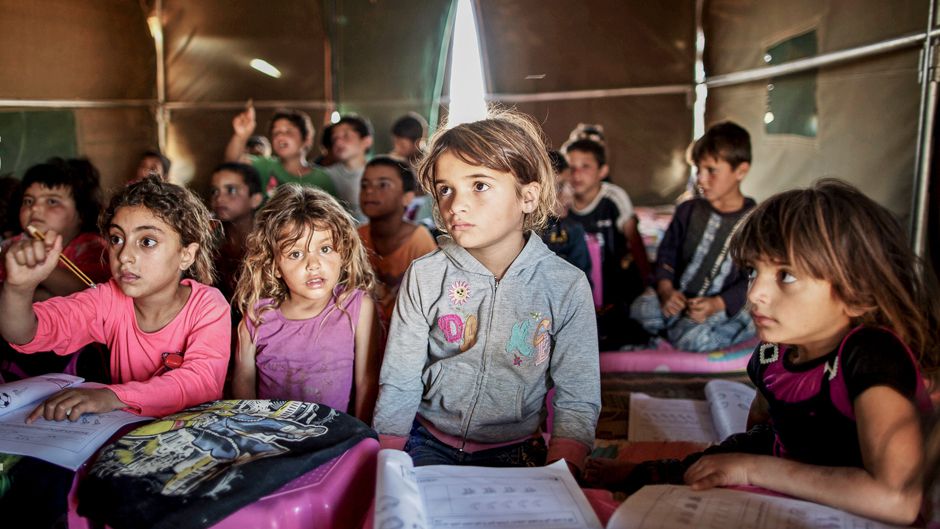 Over four million Syrian refugees have fled Syria since 2011, with the majority seeking refuge in neighbouring countries. Five years into the crisis, and with no foreseeable end, it is of grave concern that regionally about one million children are not attending school. To confront this crisis, numerous partners from the UN, international agencies, donors, governments and  NGOs are beginning to come together to prevent the escalation of a ‘lost generation’.

Over the past decade, education in emergencies has become a more prominent field in humanitarian discourse. It was a prime area of discussion at the Oslo Summit on Education for Development. The term broadly defined refers to the formal and non-formal education provision for children in areas of conflict or natural disasters.

Education is the first block in building a strong society, and without it there will be no doctors, teachers or engineers to help rebuild Syria,” says Alaa, a Syrian student at Za’atari refugee camp in Jordan.

Refugees are entitled to education as stated by the 1951 Convention Relating to the Status of Refugees, and the new UN Sustainable Development Goals have set out to ensure that all children gain access to inclusive and quality education. However, for this law to be reflected in practice and for this goal to be met, increased funding and cooperation is needed to ensure that all refugee children are able to access educational opportunities.

A range of educational opportunities can be put in place for refugee children. Provisions can be made for children both in refugee camps and urban areas. There are a number of issues to consider when implementing policies and programmes, such as the most adequate curriculum for the refugees to follow, the language of instruction, school fees, transportation costs, and the recognition of qualifications and accreditations.

Alongside usual formal schooling, non-formal education programmes (NFE) can prove to be crucial as a way of attending to children who are unable to access mainstream systems. A number of actors, including the government, UN agencies, national organisations and community groups, implement these programmes. Usually NFE does not lead to certification. The programmes are flexible and can be tailored to a child’s specific needs, allowing students to catch up on learning or focus on specific areas such as literacy, numeracy and language skills at their own pace.

Neighbouring countries, Jordan, Lebanon and Turkey have taken in the highest number of Syrian refugees since the outbreak of the crisis. Jordan currently hosts 630,776, Lebanon 1,078,338 and Turkey 2,072,290.

Syrians currently make up almost 10% of the Jordanian population. Although the country has one of the world’s largest camps for Syrian refugees, around 85% of the refugees live in urban areas. In 2014 less than 45% of school-aged Syrian refugee children were enrolled in formal schools. Syrian refugees are entitled to free primary and secondary education in Jordan regardless of their legal status. If places are available, they are able to attend schools in refugee camps and urban areas where they follow the Jordanian curriculum. The government has set up afternoon school shifts, as well as a range of non-formal education programmes. They have also implemented national strategies that include a Back to School campaign with the support of UNHCR, UNICEF, the World Bank and bilateral donors. The Jordan Response Platform for the Syria Crisis, led by the Ministry of Planning and International Cooperation, has adopted a resilience-based approach to the Syrian crisis and emphasises the need to build on and improve national education capacity to develop a more resilient education system in the long term. 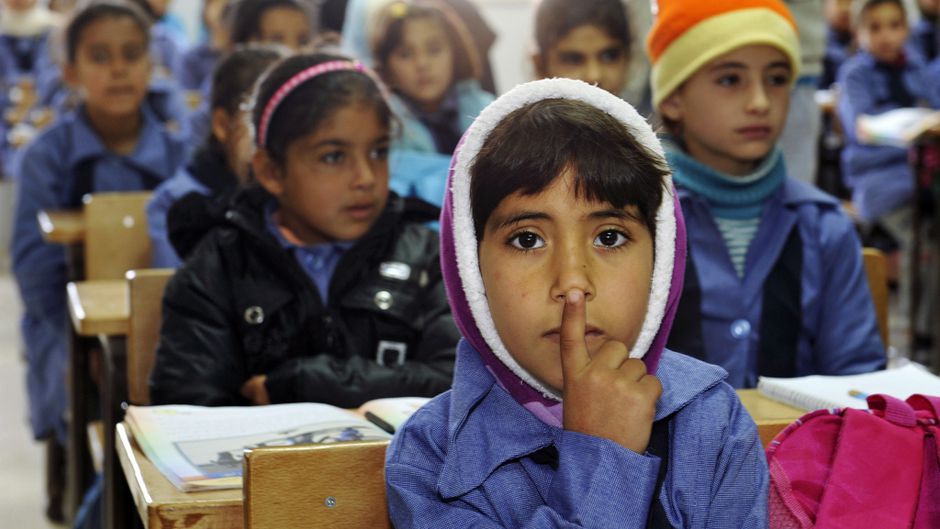 Children inside a classroom at Za’atri refugee camp, host to tens of thousands of Syrians displaced by conflict, near Mafraq, Jordan. Photo: © UN Photo/Mark Garten..

Syrians currently make up almost 25% of the Lebanese population. To date, around 71% of school-aged children displaced from Syria are unable to access any form of learning opportunities. As no formal refugee camps have been set up in Lebanon, children attend public or private Lebanese schools. Second shifts have been introduced for Syrian children where they are taught a simplified version of the Lebanese curriculum and non-formal education programmes attend to students who have been out of school for long periods of time. The Ministry of Education and Higher Education, with UN agencies, international donors and non-governmental organisations, has implemented the Reaching All Children with Education (RACE) strategy, which aims to provide 470,000 school children with access to education by 2016.

Turkey has received the highest number of Syrian refugees since 2011, which currently makes up almost 3% of their population. During the academic year 2013–2014 an estimated 70% of Syrian school-aged refugees were out of school. Initially Turkish government response focused on attending to the Syrian refugees in camps. However, around 86% Syrian refugees now live in urban areas. Until recently, there has been little streamlining of the education curricula for Syrian refugees in Turkey. In refugee camps, Syrians are taught an adapted, non-accredited version of the Syrian curriculum in Arabic. In urban areas, Syrian children have the right to access formal education via the national education system where they are taught the Turkish curriculum. However, aside from the language obstacle, there are a number of administrative barriers refugees face to enrol their children in national schools. Alternatively, Syrians are enrolled in temporary Syrian schools, where they follow an alternative curriculum.

The complexities of education in emergencies

Education provision for refugees is a vast and complex topic. Once access is ensured, equity and quality are also vital areas that need to be addressed. All three neighbouring countries are introducing strategies to ensure that Syrian refugees can attend school. However, the extremely high numbers still not accessing educational opportunities indicates the need for urgent action.

The education of refugee children brings up many strategic questions: Should longer-term measures be implemented to allow refugee children to follow the host country’s curriculum? Or should parallel systems be set up to for children to follow an adapted Syrian curriculum? As this has now turned into a protracted crisis, implementing longer-term solutions appears to be crucial. The Office of the UN High Commissioner for Refugees advocates for the integration of refugees into national education systems. This strategy can help to address issues such as the recognition of qualifications and accreditations, it can encourage social cohesion between refugees and host communities, and it is seen as the most sustainable option. 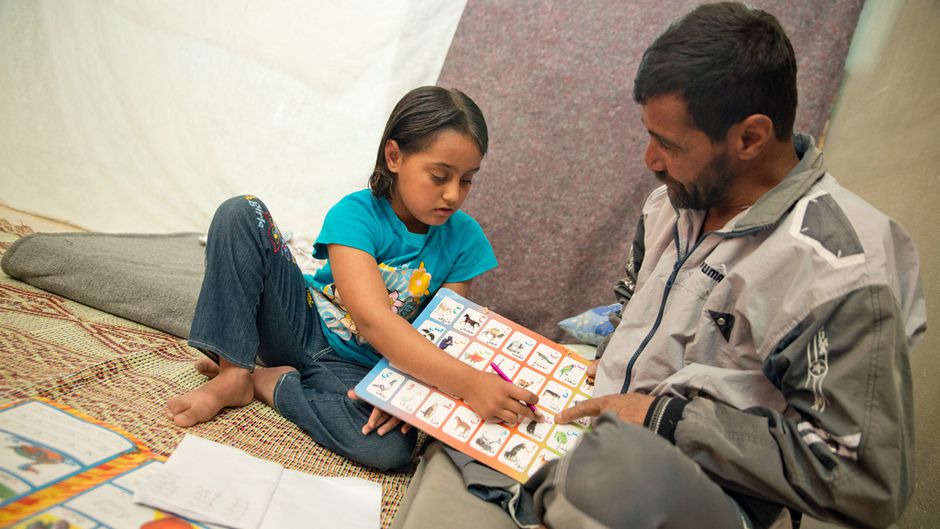 When Kinana, 9, fled her home in Syria, she was devastated that her school bag was dropped during the chaos of the journey. Although her father only completed primary school, he is passionate about her education and dreams of her going to university one day. Photo: UNHCR/Jared J. Kohler. Creative Commons BY-NC (cropped).

There are a wealth of governmental organisations, international NGOs and NGOs responding to the Syrian refugee crisis and portals have been created to share data and reports. However, as these organisations often do not work to a common framework of education provision categories, it is difficult to compare the successes of strategies introduced locally, nationally and internationally. In order to get an accurate overview and determine the successful strategies of the various education measures being implemented, international organisations and national governments should agree on a common set of definitions for the different aspects of education provision.

The value of education for Syrian refugee children

There are humanitarian, economic and social reasons why it is vital for children to be provided with educational opportunities in emergency situations. Beyond providing them with literacy, numeracy and an array of crucial skills, schools can give social and emotional support to children, they can be safe and protective environments, and can provide children with hope and aspirations.

A new set of reports by Theirworld, A World at School and the Global Business Coalition for Education warn that children out of school are more likely to be at risk of child labour, early marriage, exploitation and extremism. Alaa, a student at the Za’atari refugee camp in Jordan, says “if we can at least get an education, we have a chance of being self-sufficient and providing for ourselves in the future.”

Not addressing the estimated one million Syrian refugee children missing out on an education could lead to detrimental long-term effects both in the host countries and in their home country, if the refugees are able to return.

Education in Emergencies: Will Syrian Refugee Children Become a ‘Lost Generation’? by Alice Beste is licensed under a Creative Commons Attribution-NonCommercial-ShareAlike 4.0 International License.

Alice Beste is a research intern at the United Nations University Institute on Globalization, Culture and Mobility (UNU-GCM). She is currently pursuing a Master’s degree in International Relations at the Institut Barcelona d’Estudis Internacionals (IBEI) and holds a Master’s in Education. She has experience working in the media and education sectors and has a particular interest in social inclusion, cultural diversity and intercultural understanding.