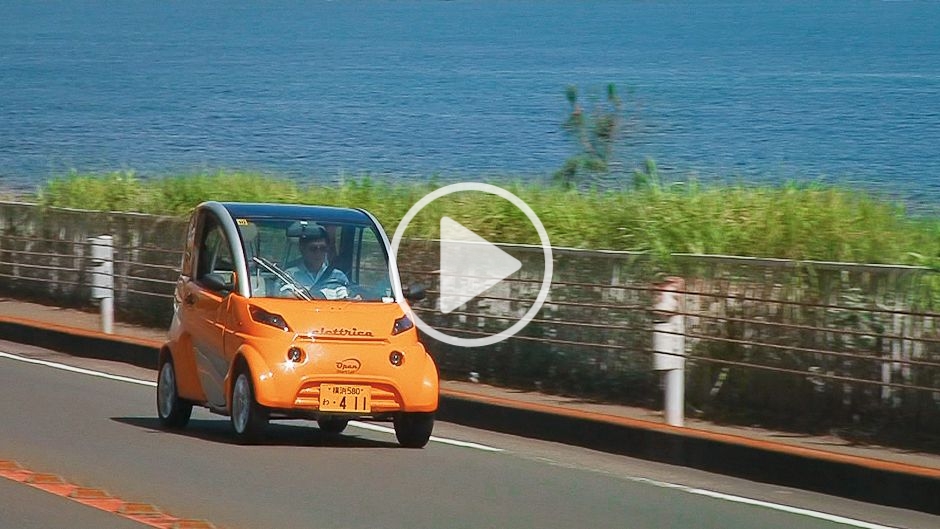 When you talk about electric vehicles (EVs) most people tend to imagine them as something that we will drive in a distant, perhaps greener, future. In fact, EVs are already here and they are slowly becoming a part of daily life in our world.

Recently, EVs have finally gone from being motor show prototypes to become actual products that consumers can themselves own. Chances are that you can go and test-drive one today, and if you like it, you can buy it and drive home without producing any carbon dioxide emissions.

Interestingly, it is small new companies and not the big automakers that are already producing and selling electric cars.

Japanese ex-race car driver Yoshio Takaoka heads one of these small firms. He travelled the world as a rally driver for automaker Subaru. His racing career took him to Italy where he had his first encounter with EVs.

“In Firenze, Italy, cars running on gasoline couldn’t enter the centre of the city.  But electric cars could. So I rented one to go into town. That was the first time I drove one,”  says Takaoka.

This experience made an impression on him and years later, after he retired from racing, he began to build electric cars in order to help protect the environment.

The result of Takaoka’s efforts is a brightly coloured 2-seater car called the Girasole Elettrica (Italian for electric sunflower) in honour of the sunflower fields he used to see on the outskirts of Firenze. It has been on the market since 2007, and has already sold about 100. The Girasole Elettrica is the first fully functional EV available to the Japanese public.

The Girasole is far from being the only commercially available EV. There are the ZENN cars produced in Canada, where the acronym encapsulates the advantages of EVs: Zero Emissions No Noise. In China, there is the Miles Car (designed in the US, built in China).  There are also the Buddy in Norway and Reva in India.

But while the basic principles behind all electric cars are the same, the main difference is the way their batteries are made. The newest and best performing EVs, like the Girasole, use lithium-ion batteries, similar to those found in laptop computers. With this type of battery the Girasole can run for 120 km at a top speed of 65 km/hr. However, there is a cost implication, since li-ion batteries are more expensive than other battery technologies. Designing EVs seems to be a difficult balancing act between performance and cost.

Another exciting development is the popularity of the Indian-made G-Wiz EV on the streets of London, in part thanks to support provided by the city government, such as an exemption from the steep £8 London Congestion Charge. Other governments around the world, either at the national, provincial or city level are supporting the proliferation of electric vehicles. In places such as Switzerland, parking and charging an electric car is free.

Takaoka believes that “…if Japan gets on the case we can easily surpass these countries.”  The Japanese national government is already offering a very substantial subsidy of ¥700,000 to buyers of electric cars, and the governments of some prefectures and cities are slowly joining in.

Where EVs are concerned, one of the most forward thinking prefectures in Japan is Kanagawa, which will start in March 2009 to provide a subsidy of about half that of the national government (i.e., ¥300,000), making EVs truly more price competitive.

Kanagawa prefecture also has a plan to ensure that there are 3,000 EVs on local streets by fiscal year 2014. This includes a range of measures to promote EVs, such as subsidies, lower taxes, plus reduced parking fees and expressway tolls. The electric charging infrastructure will be further developed with “quick chargers” installed in 30 locations by 2010, aiming for 1,000 charging outlets of 100 and 200 volts within the prefecture by 2014.

Looking to the future

So, are electric cars the way of the future? Some critics argue that it is just an intermediate step, and that the real technology of the future will be hydrogen fuel cell cars. But Takaoka disagrees, arguing that hydrogen technology is too expensive and is still years away, while electricity outlets are readily available in our homes, and EV technology is simple enough to allow even newcomer entrepreneurs to jump in right now.

Another caveat cited by some is that, while electric cars effectively produce zero emissions while driving them, the electricity they use can produce environmental impacts depending on the energy source, and there is also a lot of energy lost during transmission from the power station to the home charging site.

While Japan is the most energy efficient country in the world, its electricity still comes mainly from either nuclear energy or from burning oil, coal and natural gas (see graphic). Nevertheless, even if the electricity an EV uses is generated entirely from fossil fuels, it is less polluting than gasoline-fueled cars, due to the fact that power plants are far cleaner and more efficient than the internal combustion engine in a vehicle. As the electric grid gets cleaner and less wasteful, and as renewable energy production increases, then the environmental benefits of electric cars will continue to grow.

The next two years will be an exciting period for the nascent EV industry and car enthusiasts all over the world, as large automakers will start selling their new models. There is the Mitsubishi iMiev, Subaru’s R1e, and Toyota’s plug-in hybrid, while in the US there is the Chevy Volt.

Happily, we can expect to see more cars like the Girasole on the streets of our world, and as soon as they hit the road we will be reporting on them.

Innovation and climate change by Luis Patron is licensed under a Creative Commons Attribution-NonCommercial-ShareAlike 3.0 Unported License.