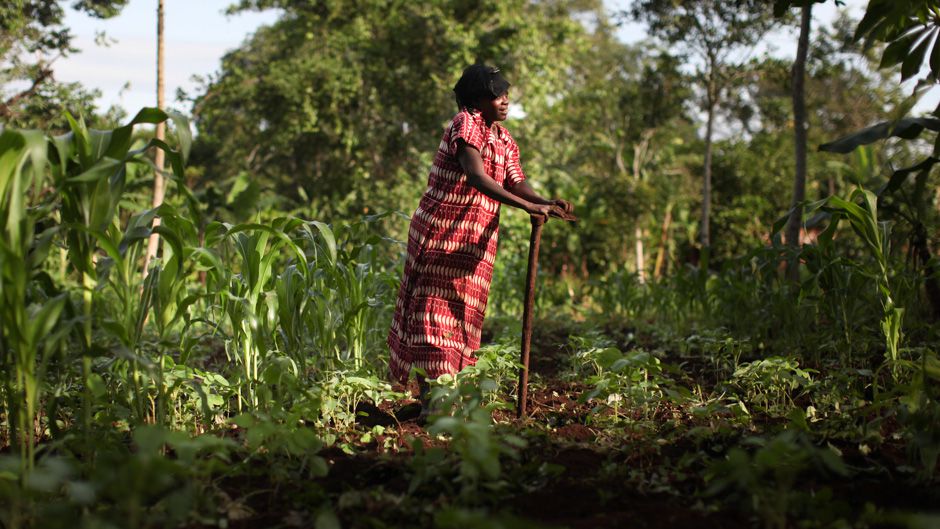 Photo by Laura Elizabeth Pohl/Bread for the World.

Effective global action requires meaningful local participation. One of the most important tasks for policymakers concerned with improving the effectiveness of global governance is enabling constructive participation in governance at the global level. Increased participation of non-governmental actors can accomplish more effective and efficient development, increased equity, legitimacy, transparency and accountability, and enhanced diversity and resilience.

An important aspect of this broadening participation has been the increased engagement of local and indigenous communities in global governance. Over the past few decades, indigenous peoples have mobilized and transformed into a group with significant influence in setting international standards. This group is also engaged in considerable unified activity in transnational networks and fundraising, as well as in intergovernmental and non-governmental organizations.

Parallel indigenous forums alongside UN conferences, which were considered innovations only 15 years ago, are now a routine element of an increasing number of intergovernmental negotiations. The Convention on Biological Diversity, for example, funds the International Indigenous Forum on Biodiversity, and incorporates indigenous input through one of its subsidiary bodies at which representatives of both national governments and indigenous and local communities sit side-by-side.

Indigenous and local communities are particularly effective in an implementation or operational context, because they can provide implementation tailored to specific conditions and can be much more agile in balancing social, economic and environmental pillars.

This is especially true with regard to the management of natural resources, which is often best handled by the indigenous and/or community organizations whose livelihoods directly depend on these resources, who can engage in more flexible and fine-tuned decision-making than highly bureaucratic national governments, and who are well placed to work towards social equity goals.

[quote quote=”In many cases, the legitimacy of international policies and decision-making depends on local experiences and local perceptions.” type=”text” ]

Despite these benefits, indigenous and local communities are excluded from many highly centralized decision-making processes that determine their future, and examples of discrimination are numerous. Yet direct engagement at the local scale has much to offer the global governance process. In many cases, the legitimacy of international policies and decision-making depends on local experiences and local perceptions. A number of international programmes are already benefiting from the local contributions of indigenous peoples in areas as varied as information collection and dissemination, policy implementation, monitoring and assessment, and policy development.

Climate change is a complex global issue. It is not just radically affecting ecological systems and causing other environmental impacts, but also influencing economic systems, infrastructure and the movement of human populations. There is clear evidence of the impact of ‘bottom-up’, place-based local action — which is an excellent lens through which to analyse indigenous peoples’ engagement in global governance processes.

As climate initiatives have begun to shift from an emphasis on global systems to more focused studies on the local implications, they have become increasingly open to the idea that indigenous and other local peoples have valuable information about local impacts, vulnerabilities and adaptation/mitigation options that should inform decision-making.

For indigenous peoples, the challenges of living with a variable and changing climate are not new. Indigenous peoples have been guardians of the environment for thousands of years and possess a broad knowledge base of the complex ecological system in their own localities. Indigenous peoples’ ability to predict and interpret environmental change using traditional knowledge has been vital to their livelihoods, survival and well-being, and it has been the foundation for the development of social, political and governance structures.

These knowledge systems are a repository of intergenerational knowledge that is based on observing and experimenting with nature.

Through this culture of intergenerational knowledge transmission, indigenous peoples are adept at developing and implementing successful initiatives to cope with local-level stressors such as climate change, and effectively responding to major environmental changes such as natural disasters. Traditional knowledge provides indigenous peoples with the tools necessary to monitor the status of a resource, to protect certain species (e.g., by temporarily restricting harvest), and to use integrated farming systems in order to maintain ecosystem process and function during periods of environmental change. Indigenous peoples’ traditional knowledge is continually being produced and maintained through complex socio-political and governance processes and helps them adapt to unpredicted environmental feedback.

Indeed, the Intergovernmental Panel on Climate Change (IPCC) noted in its 2007 report that societies have a long record of adapting to the impacts of weather and climate through a range of practices that include crop diversification, irrigation, water management, disaster risk management and insurance.

In Colombia, for example, shamans of the Tukano people rely on their traditional knowledge of local biodiversity and climate to schedule hunting expeditions during periods of species abundance and to limit them during droughts and other unexpected environmental changes. In the Puno region of Peru, indigenous peoples use their traditional knowledge about the environment and about wildlife (for example, the frequency of rains, the flowering of certain plants, the appearance of certain animals, the mating of animals, the incidence of plagues) to determine when to plant and when to harvest.

Many other indigenous peoples throughout the world rely on their traditional knowledge as a buffer against environmental variation, allowing them to identify, predict and adapt accordingly.

In the climate change context, research has found that adaptation programmes and policies designed to reduce vulnerability and enhance adaptive capacity are more successful when developed in cooperation with local representatives. This is because the community is likely to trust them and find the interventions consistent with local values and aspirations. Engagement with local peoples also improves the likelihood of effective outcomes of decision-making and policy implementation by enabling the identification of key stakeholders and institutions and facilitating knowledge transfer.

Comprehensive estimates of adaptation costs, however, are sorely lacking. Even small adjustments to livelihood practices may require associated changes in the enabling environment (for example, information availability, institutional role, infrastructure use) and low normalized costs can still be high in absolute terms.

There is also increasing international interest in the role that indigenous peoples can play in reducing global greenhouse gas emissions, commonly known as mitigation efforts. Deforestation, particularly in the tropics, contributes 19–20 percent of global greenhouse gas emissions and ways to reduce emissions from deforestation and degradation (REDD) by ensuring protection of the world’s rainforests are hotly debated.

REDD aims at supporting forest conservation and enormous amounts of money are being made available for that purpose. This may provide new opportunities to benefit indigenous communities; however, indigenous peoples have expressed concerns because their past experiences have shown that governments and private companies often refuse to recognize their rights and interests in forest policies, programmes and concessions.

Victoria Tauli-Corpuz, Chair of the UN Permanent Forum on Indigenous Issues from 2005-2010, says that while the REDD framework recognizes indigenous rights, “it is always a struggle between who owns the forest, who controls the forest, who should benefit from the forest… The big challenge is — are [governments] going to implement these safeguards? And how should indigenous peoples be prepared to ensure that governments are going to follow that agreement?”

Indigenous knowledge contributes to the science of climate change

Youba Sokona, Co-Chair of the IPCC’s Working Group III on Mitigation, recognized the value of considering traditional knowledge alongside modern science when speaking at the 2012 UNU workshop on Climate Change Mitigation with Local Communities and Indigenous Peoples.

“For the Fifth Assessment Report, we are trying to consider all available human options for mitigating climate change,” says Youba, who co-chaired the workshop. “…The dialogue with experts and scientists on indigenous and local communities is inspiring.”

Many traditional agricultural activities relied upon by indigenous peoples lead to high rates of carbon accumulation in the soil — such as no-till farming, crop residue retention, growing cover crops in the rotation cycle and adopting complex farming systems. These technologies are being recognized as important, cost-effective and equitable mitigation solutions that could enhance existing carbon sinks and reduce net CO2 emissions.

It is becoming increasingly clear, therefore, that global interventions could greatly benefit from working with indigenous peoples to identify and document trends in regional and local climate changes, to understand their long-term implications for local peoples, and to develop effective and appropriate adaptation responses based on traditional knowledge.

The rewards of indigenous innovation

Not only are indigenous peoples and local communities owners of forestland, but they are also key players in pioneering methods to reduce greenhouse gas emissions.

In Australia, the Western Arnhem Land Fire Abatement Project (WALFA) uses traditional fire management practices of aboriginal landowners together with modern scientific knowledge to reduce the extent and severity of wildfires in fire-prone tropical savannah and, as a result, decrease Australia’s annual greenhouse gas emissions from wildfires by around 36 percent.

Under this project, each year traditional owners have agreed to generate 100,000 tonnes of carbon credits in return for offset payments from ConocoPhillips of US$1 million per annum (indexed to 2005) for 17 years. This is one of many initiatives where integration of traditional knowledge and scientific methods has resulted in useful data for the development of sound climate change policies.

This example shows how indigenous peoples collaborating with the private sector can provide not just ecosystem service benefits — which include mitigating greenhouse gas emissions, sustaining biodiversity and habitat rehabilitation — but significant sociocultural benefits to traditional landowners. In the case of WALFA, these include employment opportunities for indigenous people skilled in land management and versed in the customary obligations to land and natural resources, many of whom would otherwise have minimal prospects of mainstream employment.

A review of adaptation literature from indigenous and marginalized communities reveals that most strategies typically feature practical ongoing processes that respond to many factors or stresses, rather than discrete measures that are implemented to address climate change specifically. Consistent with typically holistic indigenous worldviews, most of the climate change adaptation plans implemented by indigenous peoples span more than one sector, combining, for example, ecosystem management with biodiversity conservation and livelihood diversification, or watershed improvements with increased agricultural capacity.

It will be essential to continue to enhance synergies between conventions, agreements and disciplines to promote cross-cutting themes. Specifically, it is important to address the strong relationship between diversity (cultural, knowledge, biological) and sustainable development processes. The challenge of integrating different sources and types of knowledge must be addressed by all actors if we are indeed to find the path to a safer, more equitable, cleaner, greener and more prosperous world for all.

This article is based on a chapter in a UNU Press publication: Galloway McLean K, A Ramos Castillo and S Johnston (2012); “The role of Indigenous Peoples in global environmental governance: Looking through the lens of climate change in Green Economy and Good Governance for Sustainable Development: Opportunities, Promises and Concerns (2012), Puppim de Oliveira, Jose A. (Ed.). Tokyo: UNU Press.

How do you think we could more holistically integrate different approaches to addressing global challenges into the current disciplinary silos that characterize global governance?

Kirsty Galloway McLean is an Adjunct Fellow at the UNU Institute of Advanced Studies where she is working on climate change and traditional knowledge, and the Principal of the environment information consulting company BioChimera. She holds degrees in science (biochemistry and molecular biology) and arts (cognitive studies) from the Australian National University, and has been working in international science policy for over 20 years.