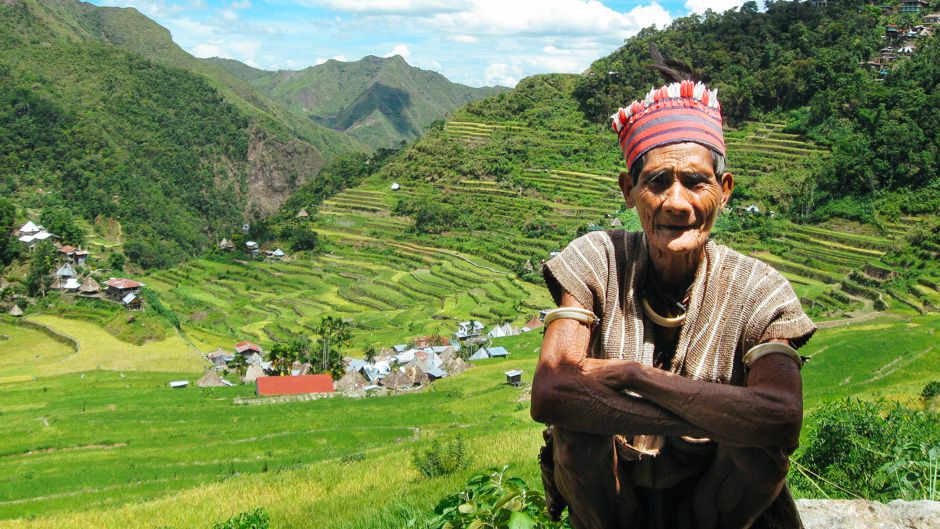 Mountain rice terracing is practised widely in parts of the Asia-Pacific. Rice terraces are deeply intertwined with indigenous cultures, traditional practices and the ecology of many mountainous areas.

Recently, the threat of climate change looms ever larger and is widely projected to impact the frequency and intensity of extreme weather events. The expected increase in extreme rainfall and resultant water cycle changes are likely to test the existing capacity of rice terraces.

One such collection of terraces under threat are the picturesque Ifugao Rice Terraces in the Philippines. These terraces are the ancestral domain of indigenous Ifugao peoples (recognized as including several subgroups such as the Banaue, Bunhran, Mayayao, Halipan, Hapao, and Kiangang). The Ifugao peoples are not only custodians of the forest and rice terraces, but also experts in harmoniously managing local ecosystems and natural resources. They mainly live at high elevations between 800 and 1,500 metres above sea level in the south, central and western areas of Ifuago province.

Located in a tropical rain forest zone rich in agrodiversity and fertile soils, the Ifugao rice terraces create an impressive landscape and provide good examples of water management. Unsurprisingly, they were listed as a UNESCO World Heritage site in 1995.

There are two seasons in the area: a long dry period from November to May and a wet season from June to October. To maintain the terraces’ complex water cycles and forests, the peaks to the middle parts of the mountainous areas are conserved as watersheds that are designated for protection and conservation of natural resources such as pine and mossy forests, medical herbs, wild animals, etc. This necessarily limits human activities in these areas, and woodcutting is especially prohibited. The people are, however, permitted to harvest forest timber and forest products from the lower mountainous areas down to the terraces. 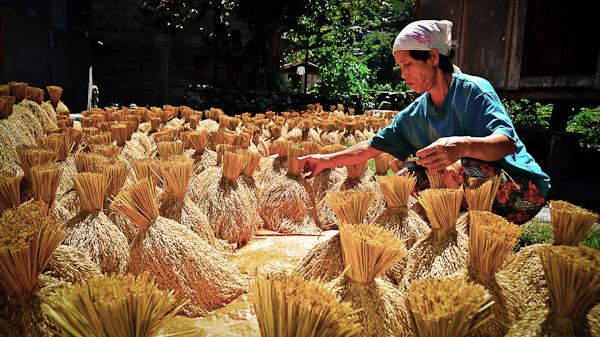 Part of the image collection of the International Rice Research Institute (IRRI).

There are thirteen major water bodies in the Ifugao province, which primarily come from surface run-off water and ground water, and these are used to irrigate the rice terraces and meet domestic water needs. The unique systems that developed over time to manage water resources for rice cultivation are balanced by carefully managing seepage, evaporation, and rainfall. The seepage from higher elevated paddies is recycled and helps in replenishing the lower paddies.

The Ifugao peoples also retain water by constructing walls and dikes made of compact soils and stones, conserving soil from erosion and creating wet fields for intensive rice cultivation. Furthermore, these communities have created many rice varieties to meet the different water regimes and temperature conditions of the mountainous landscapes. Typically, each family plants more than three rice varieties from which they harvest the seeds for the next season.

Despite their sustainable management of the rice terraces, 56 percent of the local Ifugao population of 162,000 were recognised as poverty-stricken by the national government in 2000. The income in most households comes from farm activities including rice, the main crop, supplemented by vegetables and fruits.

Indigenous peoples who maintain the rice terraces do not derive any of the benefits of economic growth that the country may experience, especially from the tourism industry. However, this situation is transforming slowly as many younger Ifugaons prefer to work in the industrial and tourism sectors and are refusing to work in rice terraces.

While it is potential economic opportunities in urban areas that threaten the continuity of the traditional knowledge that has sustained the Ifugao, the ecological functions of rice terraces are very much vulnerable to climate and other environmental changes. Climate change is expected to increase rainfall intensities and lengthen the duration of the dry season, resulting in shortages of water supplies, landslide disasters and terrace collapses.

Even though there are inconsistencies and uncertainties in climate projections that make it difficult to design adaptation strategies to climate change, based on previous studies forecasts by different global climate change models present more or less consistent patterns of predicted temperature changes. Future climate projections in the Ifugao province suggest an increase in temperature of 0.9°C by 2020 and 1.9°C to 2.1°C by 2050, as well as differences in the projected rainfall. The highest increases in rainfall are predicted during June and August, while decreasing trends in rainfall are expected during the hottest periods around March and May.

Centuries of knowledge plus science

Climate change-induced alterations in the weather pattern will therefore have serious implications for rice production. The United Nations University Institute for Sustainability and Peace (UNU-ISP) “Comparative Studies on Development Strategies considering Impacts of Adaptation to Climate Change” project (a partnership with several universities and supported by Mitsui & Co. Ltd) has recently assessed the impact of climate change on rice production in irrigation and rain fed areas of Nueva Ecija Province, located in the south and southeast of the Ifugao rice terrace areas.

Future climate trends were downscaled to local levels using what is known as Statistical Downscaling Model (SDSM) with the aim of estimating impacts on rice production. The models found that existing rice yields during the wet season of the 2080-2090 period would decrease by up to 25% in light of increases in mean daily temperature of 1.17 and 0.89 for two separate scenarios.

In fact, about 15,000 hectares of the Ifugao rice terraces have been abandoned due to low productivity over the last 50 years.  No wonder then that in 2001, the Ifugao Rice Terraces were listed on the List of World Heritage Sites in Danger due to the human induced threats and climate impacts.

Despite their sophisticated water management regimes, the abilities of indigenous rice terracing systems to adapt to especially extreme weather events are not well developed. For now, the Ifugao peoples have continued to plant their native rice varieties, which are more sensitive than introduced varieties.

Sooner, rather than later, indigenous peoples will need to cope directly with these uncertainties by drawing in part on centuries of their own knowledge. But they will also require the benefits of scientific knowledge to enable them to develop ecosystem-based adaptation strategies to enhance resilience of their rice farming system against floods and drought risks and investigate alternative water management schemes for the future.

In response to this challenge, UNU-ISP — in another project in partnership with University of the Philippines Diliman, Yunnan Normal University and Southwest Forest University (China), with the support of the Asia Pacific Network — is initiating a new study. The study aims to develop ecosystem-based adaptation measures and provide a generic method to strengthen resilience of traditional rice terrace farming systems in the Asian monsoon region, and reduce the risk of flood and drought through case studies in the Ifugao Rice Terraces in the Philippines and the Hani Rice Terraces of China.

The project will propose climate and ecosystem change adaptation measures to improve the livelihoods of the local farmers, and will synthesize research results into training modules for capacity development in local communities, government and postgraduate education.

In today’s world, with ecological challenges and climate change threats mounting and yet with heightened consciousness of the need for systems-oriented approaches, it is the melding of such mutually reinforcing techniques as science and local knowledge that will yield truly sustainable solutions.